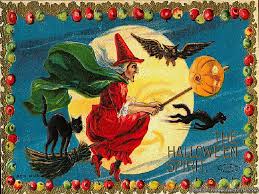 It’s the day we’ve been waiting for all year, Halloween! My favorite. I already bitched last year about the bizarre trick or treat “scheduling” of Milwaukee and surrounding areas which gives the impression that the actual Halloween DAY is passed over with nary a BOO!

But this year we get to share it with Bigg’s sister and her family up the road. It seems the children of Brookfield are able to handle the task of trick or treating on a school night, unlike the fragile children of ‘Tosa. Rain is in the forecast, I don’t care. It’s Halloween and it’s the best day ever.

One of my favorite Halloween’s was when I was probably around six or seven. It was the night before, late the night before the big day. So late that as we walked INTO Zayer’s Shoppers City they were making the announcement that the store would close in “X” number of minutes. We had to be quick in our costume picks. My older brother chose something like the above. A very scary, hot, plastic mask and a type of overlay covered smock for the costume. I chose a princess with an awesome crowned mask and baby blue dress. And a wand. I think I had a wand. Why do princesses carry wands?

Because we were so late we split up the team to ensure that we got everything. Girls went flying towards the girl section, Dad and Jerry went flying towards the boys. We met up at the cash registers as lights were literally starting to be turned off when my Mom realized they had forgot the candy which was way in the back of the store.

I can still see the determined look of Pastor John (dad) as he yelled to my mom, ‘Stall!’ and sprint off for candy. The poor check out lady (no way in those days did they trust a till with teenagers) repeatedly was telling my mom to get going. To her credit, my mom kept digging through her ginormous mom purse saying she couldn’t find her wallet until dad ran up with about 10 bags of candy. We NEVER bought that much candy!! Score one for Dad!

I don’t remember the weather the next day; the obvious boatload of candy we received; I assume I was awesome in my princess mask but I don’t remember; all I remember is my dad pulling out an Usain Bolt like sprint to get the candy.

That’s fun. Happy Halloween, may it be memorable…in a good way.

Hobgoblins know the proper way to dance:
Arms akimbo, loopy legs askew,
Leaping into darkness with delight,
Lusting for the ecstasy of fright,
Open to the charm of horrors new….

For training opportunities at tosabarbell, call or text Juli at 320-296-9313. e-mail to jep6095@gmail.com At tosabarbell, I build relationships cultivated in a strength and learning environment. There is no 12 week magic pill program to strength but rather a lifetime commitment to be the very best and most useful human you can be. tosabarbell is a private, home grown gym with three lifting platforms; squat rack; prowlers; throwing implements; bars, bumpers and everything else needed for an effective strength and conditioning program. Straightforward barbell programming including the Olympic lifts; sound (read: not fancy bullshit) diet advance for weight gain or loss; and strong coaching will ensure you will meet your goals such as becoming stronger, more explosive, and better conditioned. I have been coaching teams and athletes for over 30 years. I grew up participating in various sports at various levels but was always drawn to those that require strength training. I have multiple local, national, and world records in the sports of Weightlifting and Highland Games Heavy Events as well as a combined total of 5 World Championships. My 5 years of training and coaching under Mark Rippetoe provided a wide range of influence from some of the top strength & conditioning and throwing coaches in the country. I will strongly encourage tosabarbell athletes to compete (and prepare you to do so.) However, tosabarbell is also for those who wish to be stronger and go through life feeling better. Matt WanAt is a retired Professional Strongman who competed frequently with Strongman Champions League in Europe. He played a year of D1 football with Iowa before concentrating on his Chemical Engineering degree in Iowa City. He is a native of Wauwatosa and still remains a staunch supporter of Tosa East. This blog will be a mixture of strength notes, coaching and nutrition tips, personal shit; bacon delicacies, and a whole lot of fun.
View all posts by tosabarbell →
This entry was posted in Uncategorized and tagged Halloween, Halloween Poems, Halloween Vintage, Shoppers City, tosabarbell. Bookmark the permalink.