As many of you know, Bigg ‘s first competition back from his bicep tear is officially in the books. At the end of the day, it was an incredibly successful event. First of all, he was able to go against top level competitors in a fairly relaxed setting. Now when I say relaxed, I mean those times when the clock is NOT running. Believe me, these guys want to kick each others ass in the events, it’s endearing.

It was the first time I’ve had a chance to see him compete live and it was a blast. Bigg started out the day with a win in the Log press, but we knew he probably would. Face it, if you don’t know by now that Bigg is an outstanding presser, you haven’t been paying attention. His next two events had some interesting developments. The yoke walk was textbook and he made 870# look like pvc. But the Keg carry afterwards gave him some trouble and highlighted some areas to work on going forward. Competitions are like that, eh? As soon as we’re on top of the world, the next event can bring us back to the earth in dramatic fashion. This is where experience in competing all day comes in. As pensive as he was after the event, he geared up for his next one shortly after.

The first lap of the farmers walk was much like his yoke walk, textbook. After the turn, his grip became a bit of a distraction and he struggled again. But he finished and he was able to put it away and look to the next event. The Husafel stone was going to be interesting as he’s never done it before. He got some advice from some of the other guys and got ready to hit it. 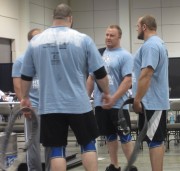 On a side note, everyone here was incredibly friendly. Matt got a chance to talk a bit with Ryan Bracewell who he’s seen before but not connected with and Ryan is a very nice guy with a great family. Another Wisconsin couple proved how friendly midwesterners can be and watching America’s Strongest Man Travis Ortmayer compete is nothing short of breathtaking. His speed and strength are something to see.  There were a lot of very cool amateurs competing and their hard work was impressive. One dude who trains with Ryan and Travis down in Houston, an 18 year old silly boy named Ryan Bell, churned out some of the most impressive work of the day. Once Dione said go, he gave everything he had. It was very awesome and you quickly understand why he trains with the big dogs. Keep an eye on this kid, he has the makings of a very impressive Strongman going forward.

Back to the Husafel. As I said, this was his first go at the event. We watched a few others deal with the weight and came up with a way that he could utilize his strength in keeping the weight up and keep moving as quickly as possible. The first 100′ went fine but after his second turn the weight quickly started pulling him forward and he lost his grip. Overall, it was a success since it was his first time and he has an idea on how to train it in the future. OH! I can’t move on to the last event until I talk about the loader you see above on Bigg’s right. His job was to let the athletes know when they’ve hit the line and can turn around. However, what he did was talk non-stop and kept these guys (AND gal) moving forward without the distraction of up to 400#of weight sitting on their chests. His stern commands on staying with him and to keep moving made him one of my hero’s of the day. He was awesome.

Ok, the last event was the biggest test of the day. The new Flipper by Milo replaced the tire flip which tends to take out Strongman from competition at a fast rate. This was the one event where Bigg had to put aside his fear of a re-tear and just do it. In the end, he had a complete blast and I think wanted to go a couple more rounds with the thing.

The day was successful in that he came back strong; had a very good time; identified some strengths and weaknesses moving forward getting ready for July’s America’s Strongest Man in NYC and recognized his confidence in his bicep repair really wasn’t very far away at all.  I also want to congratulate Dione Wessels and Mike Johnston in putting on a very good show. Mike on the mic (heh) kept the energy high for the competitors while keeping the fans engaged and Dione has a very chill, fun side to her while remaining professional the entire day. It was very cool.

I’m stoked about the great weekend and I’m looking forward to seeing Matt compete again, it was quite a treat to be there with him. You can see Matt’s write up on the day on his Starting Strength log here: http://startingstrength.com/resources/forum/showthread.php?t=29552&p=445979#post445979.