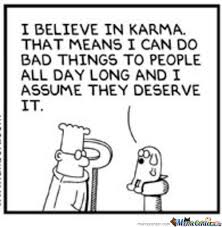 We’ve all heard it, we’ve all most likely said it, “Karma’s a bitch.” Usually said with a self righteous nod of some sort. As in, ‘uh huh, they got theirs!’ Because we knew they would right? No one can walk the earth, crap on people all day long and not get what’s coming to them, right?

There are many interpretations of Karma but many agree on the idea of cause and effect. We’re probably most familiar with the Buddhist view that our actions and thoughts can either improve our Karma (through fixing past lives errors) or continue our misfortunes into our next life.  Tommy Suggs is a great teacher of our thoughts and actions having control over our center, or peace of mind.

Our actions are easy to watch. We can either be a mean person or a good person. It’s that simple. Its a conscious effort to be either. We can call it habits, but really, if you want to walk through life being cruel to people around you there will be a darkness in you. Now, maybe you’re the only one who knows it’s there, but probably not. People who are centered and at peace with themselves can usually spot it and avoid the influence. Perpetual chaos and discontent is a rough path, I have found that being around people with these qualities puts me in a position of a lot of stress and discomfort.

But our thoughts are tricky. It is so easy to have negative thoughts towards others or situations that it becomes automatic. If someone had a negative impact on us, we silently (or not so silently) cheer on their misfortune. And here’s what people miss in this approach: Your negative thoughts towards others come back to you. Not them, they are responsible for their own. You and yours. Dance on their graves all you want just because you believe they’ve wronged you in some way, it’s yours to own. The negative energy you send out in the world will come back to you, that is Karma.

So when life bites the ass of a competitor; a person who’s been unkind or unfair to you in the past; or really anyone who’s negativity has shaped part of your life, let it go. It’s one of the hardest things for us to do, but we’re better for it. Don’t clutter your pretty little head with shit. Live a life that makes you proud and don’t worry about the other guy. Sometimes bad stuff happens and has no more meaning than ‘it just happens.’ But celebrate in their pain or misery? That’s on you.

Because really? Your karma is the only bitch you need to be concerned with.

In order to carry a positive action we must develop here a positive vision.

For training opportunities at tosabarbell, call or text Juli at 320-296-9313. jep6095@gmail.com tosabarbell is a private, home grown gym with three lifting platforms; squat rack; prowlers; throwing implements; bars, bumpers and everything else needed for an effective strength and conditioning program. Straightforward barbell programming including the Olympic lifts; sound (read: not fancy bullshit) diet advance for weight gain or loss; and strong coaching will ensure you will meet your goals such as becoming stronger, more explosive, and better conditioned. Juli has been coaching teams and athletes for over 20 years. She grew up participating in various sports at various levels but was always drawn to those that require strength training. She is a 2-time Master's Amercian Weightlifting Champion and holds six Master's American records. She is a Master's Weightlifting National Champion and holds three National records. She is a Master's Weightlifting World Championships Silver Medalist in 2016. Juli is also a Masters Highland Games World Champion and holds three World Records in the Braemar Stone; Heavy Weight for Distance, and Light Weight for Distance in the 45-49 class. Her 5 years of training and coaching under Mark Rippetoe has honed her coaching skills to be a top choice for you to reach your strength and conditioning goals. Juli will strongly encourage tosabarbell athletes to compete (and prepare you to do so.) However; tosabarbell is also for those who just wish to be stronger and go through life feeling better. Matt WanAt is a retired Professional Strongman who competed frequently with Strongman Champions League in Europe. He played a year of D1 football with Iowa before concentrating on his Chemical Engineering degree in Iowa City. He is a native of Wauwatosa and still remains a staunch supporter of Tosa East. This blog will be a mixture of strength notes, coaching and nutrition tips, personal shit; bacon delicacies, and a whole lot of fun.
View all posts by tosabarbell →
This entry was posted in Uncategorized and tagged Dalai Lama, Karma, Sportsmanship, strength training, Tosa weightlifting. Bookmark the permalink.