A couple of weeks ago, the Oz man and I headed to the Minnesota State Fair. My niece had a few morning performances with her “clogging” class and I figured if we could get in and out of there early enough, we’d be okay.

I guess Oz had never been to the State Fair. Now he knows why. Screaming kids; parents walking around with beers at 8:00am; miles of the shittiest food imaginable (minus the Pronto Pups, those are brain food), and about 4 billion people too many. That’s the Minnesota State Fair. OH hey tho, there are sculptures made from ginormous blocks of butter of the heads of the current Dairy Princesses. So that classes up the joint a bit.

During a clogging break, my brother walked us over to the Minnesota DNR building. I can honestly say that this display is always pretty cool and a must see if hitting the Fair. They have the history of mining; hunting; fishing; conservation of all kinds; a fishing pond (no, you can’t fish but they have all of the fish that can coexist in one huge pond where there are signs all over to not throw money into the pond. So ya, there’s tons of money in the pond. Go there and never wonder again how Obama was re-elected.)

Anyway. One of the displays explained the damage that Zebra Mussels have wreaked all over the Minnesota Lakes. They had a shopping cart, like the picture above, covered in Zebra Mussels. I kind of wonder if these people just keep putting shopping carts in the sky blue waters of Minnesota just so they can make a point. Shrug.

I will be the first to admit, I know very little about Zebra Mussels. It’s been a long time since Lake life was my normal and I’d hear about watermilfoil which was the precursor, I guess, to Zebra Mussels. Oh sure, you hear about cleaning off your boat and motor when leaving lakes afterwards but it didn’t affect me. That came about sometime in the last 20 years. But I didn’t know. See, I grew up on the waters of Lake Pokegama in northern Minnesota. I literally just used the Google to pull up an image of Lake Pokegama and this is what came up: 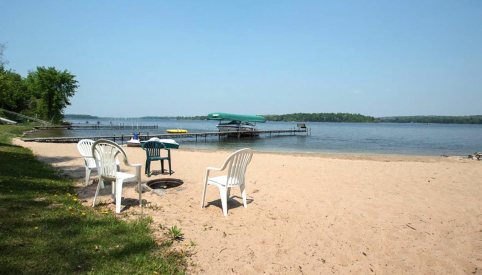 Seriously, that’s my beach. How do I know. Well, it is the best white sand beach on the lake. And oh, by the way? It’s a huge lake. That Island out to the left of the first dock is Kings Island. Our neighbor, Dave Beatty, fished in it’s rocks at 5:00am every day for at least 30 years, probably more. If you swim straight out about three quarters of a mile from the right border of the picture, you’ll hit a Girls summer camp and can rest on their docks before you swim back. Guess how I know? If you move around the girls camp to the Northwest, you’ll hit the boys camp. It’s a rite of passage to sneak out at night with beer; canoe over to the boys camp, steal all of their clothes that are hanging up and drape them over their docks and diving boards.

Guess how I know.

The beach has shrunk a bit and the grass on the left border is annoying. See, the beach ran up to the tree line at the bottom of the hill but when people bought the cabin and property when my parent’s decided to sell (bad day. Very bad day) they tore out a path of trees and laid down sod. Therefore, grass has replaced beach. Fuckers.

I could write a 100 page blog on memories of the Cabin. It was my most precious church growing up. The smells; the sounds of chainsaws at 7am on a Saturday (is there a better sound to wake up to?); The loons; the waves gently lapping the beach. My brother falling asleep on an air mattress off the beach and floating down to the 169 bridge and having to swim back (he was fried crisp, it was hilarious.) You can see down at least 20 feet the lake is (was) so clear. I hope it is still so. The moon would come up over The Harbor boat up dinner club to the east. We’d lay on the beach and watch meteor showers; the northern lights, and the milky way.

I just took a look on the Minnesota DNR list of infested lakes. I’m not going to lie, I held my breath a bit as I got closer and closer to Pokegama. It does have watermilfoil, which I remember hearing about. That presents it’s own trouble and hopefully they’re on the motherfucker to get it fixed. Dunno. In my head I’ll say they are. But to my knowledge, my lake is clean.

Each time we’d pack up the station wagon and head to Grand Rapids from Minneapolis, we knew that once we hit Lake Mille Lacs near Garrison, we were up north. The air got cleaner and cooler. The tree lines changed to more birch. Relax. It’s all good. (Maybe why I never took to smoking pot, I got that feeling from going up north. Dunno.) We could stop and stretch our legs, dip our toes in the water (even if the ice had just come off), let our Chinese Pug go TT. If we were really good, we could run into the Trading Post and buy a beaded coin purse or a fake bow and arrow. I still have my beaded coin purse by the way. Hoard much?

We went Ice Fishing on Lake Mille Lacs one weekend when I was younger. I was terrified of the fishing holes in the cabin; my sister entertained my brother and I by shoving Bugle chips up her nose and then eating them, and one of the workers at Eddie’s  plowed out a patch on the ice for me so I could spend my days ice skating (which I was limited to in increments of 10 minutes. How do you know it’s cold in Minnesota? Your mom would rather have you inside a fish house fighting with your brother instead of outside ice skating.) True story.

Later, we’d hit boat launch fishing expeditions on Lake Mille Lacs which really turned into a drinking expedition with a little fishing thrown in for fun. In case we didn’t get enough bevvies in, we would head to the Blue Goose when the guys were done cleaning the fish. From there, shit gets fuzzy. Needless to say, these annual trips with my brother and sister and friends were some of my funnest fun.

So when Jerry told me, while touring the DNR building, that Lake Mille Lacs was declared catch and release only for Walleye Fishing, I was shocked. WHAT? Lake Mille Lacs is one of the largest, premier Walleye fishing lakes in Minnesota. What’s up? Well, Jerry says, Zebra Mussels have a part in that. Fok! Fok you Zebra Mussels!

Now, after getting home and reading a bit about it, it seems that the reason for the  diminishing Walleye population on Mille Lacs isn’t quite figured out yet but yes, Zebra mussels that have camped out on the floor of 35% of the lake that they are able to (the other 65% of the lake bottom is too soft) they could affect the natural walleye population but they just don’t know (I dunno, I guess when they say “climate change” I assume they have no clue. They’re just throwing terms on the wall to see what will stick.)

I did read a quick article that the Zebra Mussel population may be decreasing for the first time in years. I hope so.

And  ya know what? All of that has absolutely nothing to do with today’s post. GOTCHA!

See, standing in that DNR building at the State Fair and looking at that shopping cart covered in Zebra Mussels, all I could think about what’s hanging off of me to weigh me down and make me perform (in life mostly but ya, sport too) at diminished capacity. What are my Zebra Mussels?

Netflix (srsly); Social media; TV (not as much anymore since we dumped cable, piss off Time Warner); ANW (did you see that last night? No one won. I just spent a fucking season watching this stupid “sports” show and no one won. Uhhhhh, buhbye), and Drudge. Not to mention people who I allow to affect my Quan. Phone games (if I don’t save Panda’s each day then, I dunno, Panda’s won’t be saved.)  Whatever it is that causes drag through life. I need a Department of Juli Resources to develop a program to decrease my drag. Oh ya, that’s me. I guess. Is that why “Life Coaches” are a thing in America? So we don’t have to be responsible to actually make changes ourselves? ‘Cuz now I understand. I don’t want one, but I get it now.

Connect. Plug in, to real people, not e-plugs. I need to do that more. Sure, most people drive me crazy but geez, there has to be some out there that don’t. And, let’s be honest, it’s quite possible that I drive others crazy. Improbable, I know, but possible. Heh. So work on that stuff too. So I don’t become someone else’s Zebra Mussel. That would make me very sad and very not proud. So I’ve got work to do.

Welcome to Lake Wobegon, where all the women are strong, all the men are good looking, and all the children are above average.

For training opportunities at tosabarbell, call or text Juli at 320-296-9313. jep6095@gmail.com tosabarbell is a private, home grown gym with three lifting platforms; squat rack; prowlers; throwing implements; bars, bumpers and everything else needed for an effective strength and conditioning program. Straightforward barbell programming including the Olympic lifts; sound (read: not fancy bullshit) diet advance for weight gain or loss; and strong coaching will ensure you will meet your goals such as becoming stronger, more explosive, and better conditioned. Juli has been coaching teams and athletes for over 20 years. She grew up participating in various sports at various levels but was always drawn to those that require strength training. She is a 2-time Master's Amercian Weightlifting Champion and holds six Master's American records. She is a Master's Weightlifting National Champion and holds three National records. She is a Master's Weightlifting World Championships Silver Medalist in 2016. Juli is also a Masters Highland Games World Champion and holds three World Records in the Braemar Stone; Heavy Weight for Distance, and Light Weight for Distance in the 45-49 class. Her 5 years of training and coaching under Mark Rippetoe has honed her coaching skills to be a top choice for you to reach your strength and conditioning goals. Juli will strongly encourage tosabarbell athletes to compete (and prepare you to do so.) However; tosabarbell is also for those who just wish to be stronger and go through life feeling better. Matt WanAt is a retired Professional Strongman who competed frequently with Strongman Champions League in Europe. He played a year of D1 football with Iowa before concentrating on his Chemical Engineering degree in Iowa City. He is a native of Wauwatosa and still remains a staunch supporter of Tosa East. This blog will be a mixture of strength notes, coaching and nutrition tips, personal shit; bacon delicacies, and a whole lot of fun.
View all posts by tosabarbell →
This entry was posted in Uncategorized and tagged Beaches, Catch and release, Garrison Keillor, Lake Mille Lacs, Lake Pokegama, tosabarbell, Up North, Walleye Fishing, Zebra Mussels. Bookmark the permalink.