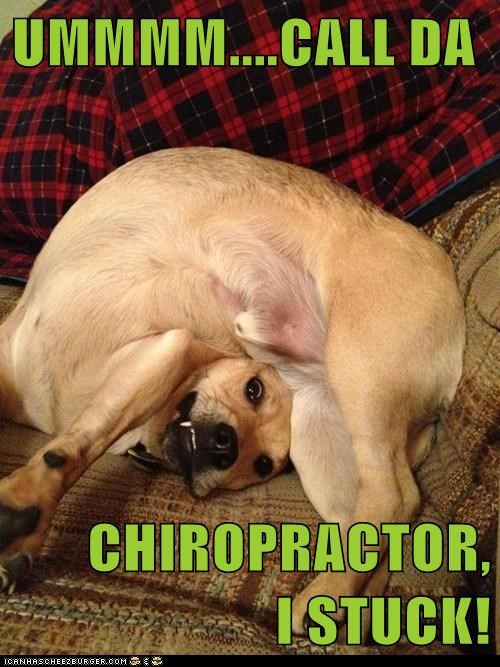 I’ve talked about how important it is to me that I take care of my back. What I failed to mention last time is that I have a cousin in Madison who’s Chiropractic business has been going strong for over a decade. She’s worked with many powerlifters and even her receptionist has a hubby who is a competitive bodybuilder. Moral of the story, she knows her stuff and understands all the work we do that can help us keep a strong back and in a flash, mess us up enough to be miserable.

I took a little roadtrip last week so I could have lunch with Cousin Stacy AND get cracked by Dr. Shropshire. And crack me she did. After taking a couple of x-rays to make sure things looked relatively good (they did), she got me on the table and went to work. She’s magic. I counted at least 8 good cracks before she even got to my neck! I felt like I could finally relax, it was glorious.

OH! Her best line of the appointment? “You have really good posture but your shoulders have a round to them, do you work on your upper body a lot?” Uhhhhhhh, yeah. Lots. Heh. If you’re in the Madison area and your back needs some good cracks, call her…she’s your gal. She’s at HealthSource of Fitchburg; Dr. Stacy Shropshire; 608-274-3809.

Shut the fuck up Donny.

For training opportunities at tosabarbell, call or text Juli at 320-296-9313. jep6095@gmail.com tosabarbell is a private, home grown gym with three lifting platforms; squat rack; prowlers; throwing implements; bars, bumpers and everything else needed for an effective strength and conditioning program. Straightforward barbell programming including the Olympic lifts; sound (read: not fancy bullshit) diet advance for weight gain or loss; and strong coaching will ensure you will meet your goals such as becoming stronger, more explosive, and better conditioned. Juli has been coaching teams and athletes for over 20 years. She grew up participating in various sports at various levels but was always drawn to those that require strength training. She is a 2-time Master's Amercian Weightlifting Champion and holds six Master's American records. She is a Master's Weightlifting National Champion and holds three National records. She is a Master's Weightlifting World Championships Silver Medalist in 2016. Juli is also a Masters Highland Games World Champion and holds three World Records in the Braemar Stone; Heavy Weight for Distance, and Light Weight for Distance in the 45-49 class. Her 5 years of training and coaching under Mark Rippetoe has honed her coaching skills to be a top choice for you to reach your strength and conditioning goals. Juli will strongly encourage tosabarbell athletes to compete (and prepare you to do so.) However; tosabarbell is also for those who just wish to be stronger and go through life feeling better. Matt WanAt is a retired Professional Strongman who competed frequently with Strongman Champions League in Europe. He played a year of D1 football with Iowa before concentrating on his Chemical Engineering degree in Iowa City. He is a native of Wauwatosa and still remains a staunch supporter of Tosa East. This blog will be a mixture of strength notes, coaching and nutrition tips, personal shit; bacon delicacies, and a whole lot of fun.
View all posts by tosabarbell →
This entry was posted in Uncategorized and tagged Back health, Barbell, Chiropractor, HealthSource, Madison, strength training. Bookmark the permalink.