Monday Bacon: I’ll Get It Next Time (and other lies we tell ourselves.)

Brazil’s Fernando Saraiva Reis. I adore this lifter. He seems to always be having fun.

I touched on this a couple of weeks ago. An article I skimmed the other day annoyed me enough that I’ll dig a little deeper here.

Last month, I had a client compete in a local strongman contest. This was his second year and, imo, he did awesome. He improved some things he struggled with last time (mostly food. Getting him to understand the food necessary to keep going during a multi-event Strongman contest has been a bit of a struggle. It seems we’ve turned a corner and he fuels his bod throughout the day to have steam for his last event. Total win!) and we’re very proud of him.

We had Bigg birthday plans so couldn’t make the contest but I felt okay about it since he’d already been through this one and knew the ropes. In general, if I have someone competing locally, I’ll do what I can to get there. Anyone who steps up to the plate/platform/tire flip is tops in my book. But improvements throughout the year is expected, especially if you’re working with someone who knows what they’re doing and you’re executing what you know.

As we all know, execution of what we know isn’t always easy. We’ve all been there. We no height/bomb out/no turn our way into a less than stellar showing than what we’d hoped. Happens. To everyone. It’s frustrating A.F. but all you can do is get back in the gym and go back to the drawing board.

And as a coach, it’s your job to figure out why. As I mentioned earlier, mechanics. What mechanical failure occurred that prevented success? As I mentioned above, are you not eating enough to fuel yourself for the entire day? What, specifically, happened? Cuz, “I dunno” is a stupid thing to say when failure occurs. “I dunno” means you’ve hired the wrong coach to see you through failure. “I dunno” means you demand your money back immediately or at the very least, part ways.

Oh, another way to say, “I dunno” is “yeah, that just happens.” Failure happens. But not “just.” Something has broken down to allow it to happen. Let’s figure that out. Food/Sleep/Programming/Mechanics/Life. Something to interfere with all of our hard work to prevent us from achieving a range of well done to outstanding.

But ya know what? That hasn’t happened in the history of EVER because that’s not how this works. There are people who go their entire competition career who fail to fix whatever is holding them back. Whether it be mechanics or motivation, they just didn’t find the right person to pull it out of them. That is unfortunate. Incredibly. A lot of athletes with amazing capacity for success fall by the wayside at some point. If you don’t believe me, watch a 30 for 30 marathon during your next snow day. You’ll be completely depressed but at least you’ll see I’m right.

Very rarely does shit “just happen.” And if it does, it happened by accident and will be damn hard to replicate it. I dunno, I like to duplicate success so I’d rather not leave it up to chance. That requires the work, the correct work, to instill the (in this case) movement.

Back to our Strongman event. Chris missed his 3rd attempt Log Press and when he texted me he said, ‘I’ll get it next time.’ Cool. I wasn’t there but if he says he’ll get it next time, maybe he will. Let’s look at the video. Luckily, there was video. Uh oh, mechanics are off. We watched it together and went through what needs to improve and, if he does, chances are he WILL get it next time. But not without addressing the problem. In fact, I think my words were “If you lift it like that, you won’t get it next time.” I’m encouraging that way.

This also explains why my style of coaching isn’t for everyone. Especially people who’s mommy told them they can do anything they want; they are destined for greatness; or they are the most special snowflake. If this be the case in your life, don’t call me. You won’t last long. (We once knew a lifter who would claim that he was destined for greatness. The problem was, he wasn’t and so he ADD’d his ass all over the strength/conditioning/diet world trying to find what he was great at while giving it 3-6 months with each endeavor to find out. Dude. First off, “Greatness” rarely occurs. Like, ever. Mother Teresa. She was ‘Greatness.’ Richard Branson/Steve Jobs/Bill Gates. Greatness. They have impacted the world with their works/ideas. Lifters? No. And yes, we may impact those around us in positive ways and we can be incredibly satisfied about that. But that’s not ‘Greatness.’ STFU.)

But we can make small changes to mechanics that have large impacts to overall success and that is awesome. That’s what we strive for, yes? Small success’ over time allowing us to be better than a year ago. It is how I approach my own lifting. For every session, I am most likely trying to fix one thing. Maybe two if I can but one will be more important than the other. I don’t assume I’ll get it next time, I’ll work today to fix why I didn’t last time. I’m perfectly happy with small improvements. And when I tell someone working with me that they did a great job, I mean it. I don’t throw that shit out there willy nilly. Because I value the small steps. And in almost all cases, I know how to fix the little shit with big impacts and if I don’t, I’ll find out how. (Also, I’ll give credit to whomever helped me. Don’t you just love these “coaches” who have claimed to figure out shit on their own and then don’t even know how to describe how they’ve come to their ‘own’ conclusions? I know I do. Strength coaches who take people’s money and know jack shit about strength coaching. I can name 5 gyms in the immediate two square mile radius around me that do this. Pieces of shit. Not because I can help everyone, but I don’t take money from people I can’t.) 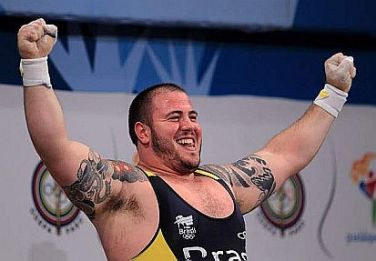 One last Fernando picture. Are you having this much fun lifting? I hope so.

Right now I’m just delighted to be alive and to have had a nice long bath.

For training opportunities at tosabarbell, call or text Juli at 320-296-9313. jep6095@gmail.com tosabarbell is a private, home grown gym with three lifting platforms; squat rack; prowlers; throwing implements; bars, bumpers and everything else needed for an effective strength and conditioning program. Straightforward barbell programming including the Olympic lifts; sound (read: not fancy bullshit) diet advance for weight gain or loss; and strong coaching will ensure you will meet your goals such as becoming stronger, more explosive, and better conditioned. Juli has been coaching teams and athletes for over 20 years. She grew up participating in various sports at various levels but was always drawn to those that require strength training. She is a 2-time Master's Amercian Weightlifting Champion and holds six Master's American records. She is a Master's Weightlifting National Champion and holds three National records. She is a Master's Weightlifting World Championships Silver Medalist in 2016. Juli is also a Masters Highland Games World Champion and holds three World Records in the Braemar Stone; Heavy Weight for Distance, and Light Weight for Distance in the 45-49 class. Her 5 years of training and coaching under Mark Rippetoe has honed her coaching skills to be a top choice for you to reach your strength and conditioning goals. Juli will strongly encourage tosabarbell athletes to compete (and prepare you to do so.) However; tosabarbell is also for those who just wish to be stronger and go through life feeling better. Matt WanAt is a retired Professional Strongman who competed frequently with Strongman Champions League in Europe. He played a year of D1 football with Iowa before concentrating on his Chemical Engineering degree in Iowa City. He is a native of Wauwatosa and still remains a staunch supporter of Tosa East. This blog will be a mixture of strength notes, coaching and nutrition tips, personal shit; bacon delicacies, and a whole lot of fun.
View all posts by tosabarbell →
This entry was posted in Uncategorized and tagged Bad Strength Coaches, Brazil Weightlifting, Fernando Saraiva Reis, Keep working, Lifter fails, Monday Bacon, Next Time, Strength Coach, weightlifting. Bookmark the permalink.