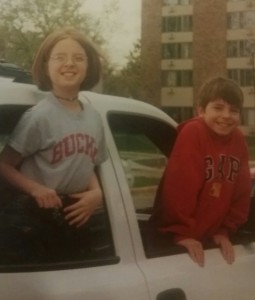 As parents, the ONE thing we want to do on our children’s birthdays is to give them a special day. From sun up to sun down, it’s their special day.If they’re twins, they have to share…usually. My Z’s had a set of twins in their class where one was born before midnight, and the other after. Lucky ducks. Although then Mom had to have two consecutive special days so it may be easier to just get’r done.

The Hawaiian tradition is to give a ginormous party on their child’s first birthday. Luau!! Zac and Zandra’s first birthday was a little more subdued but no less festive. A Mickey and Minnie mouse cake, lots of laughter and love and celebrating how special they were. A mother could ask for no less for her children’s birthday’s.

Through the years, there have been many celebrations. New hockey sticks; bikes; a longboard; goalie pads (we could have bought her a car for the amount of money spent on goalie equipment. A nice car!) Many cakes, many celebrations. Much love and laughter celebrating the Z’s special day. Memories flood a mothers heart on days like this and make us so thankful.

But there’s another feeling that keeps crowding in and that’s melancholy. See, it’s easy to celebrate birthdays when children are still young. Some birthday breakfast bacon and a donut; a fun school lunch and bowling party; about a million birthday hugs; balloons; cakes; prizes and finally an exhausted good night hug. Easy.

Things get trickier as kids get older. School sports; school; logistics; jobs (Zandra is very offended that she has to work on her birthday, she has already stated that for the record. Adulting can be a birthday buzzkill.) Also, it could be that your birthday boy is in a tough place and the thought no one is with him to make him feel special, especially on is special day, breaks a mother’s heart. No one there for birthday wake up hugs, no one to take him to birthday lunch or dinner, no  one to make him his birthday bacon. Just another day of survival. It grips my heart and sometimes squeezes tight enough that I have to just breath and step away from it for a minute.

While I am so overjoyed to be able to spoil the birthday girl in spite of unsympathetic bosses and in two days jet she and her BFFandever off to paradise, a huge chunk of my heart is so sad for my boy. Yes, in so many ways he is making his life so hard but that’s not the point of today. Today is his special day and Mom’s not there. All I can do is send the love into the wind, “You are special. You are loved. This is not your destiny. Keep fighting. Never stop fighting. Each day holds a chance to be in a better situation. Seize it! You are loved” and hope the words find his heart.

And I am thankful. Thankful for my “second daughter” who is coming to Hawaii with us who went and picked up a birthday card and birthday cupcakes and brought them over to his place. So he knows. He IS special and this IS his special day. And for that, I am so thankful. Mayce, you da man.

Silence is Golden…unless you have kids. Then silence is just suspicious.