It is not uncommon to walk outside when Oz is shoveling (or shoveling dog poo) and hear this music. He loves the majestic sounds of Russian orchestra and men’s choirs. And this isn’t new. He’s been playing it for at least five years or so. Sure, the first time I heard it coming from his room, I had to ask, ‘WTF is that dude?’ Ever get looked at by a 10 year old with a look of complete bafflement as to why you don’t understand that they love Russian choir music? Ya, that.

Oz has been entertaining us now for 15 years…officially 15 years today. When he came home from the hospital, we went right into “need to throw your twin brother and sister a golden birthday party” mode and he contributed by sleeping right through it (big babies like to sleep. Yeah Oz.) He cried for two nights until I finally put him on my chest to sleep, propped up by about 80 pillows so I wouldn’t roll on him and he’d sleep between each feeding. I remember my sister asking once when he was over a  year old if he were sleeping through the night yet and I’m all, ‘uhhhhhh ya, he’s been doing that since about month one.’ I didn’t mean to be a dick, it just didn’t occur to me that I should be sleep deprived like I was with two preemie twinsers that I was raising on my own.

There are fewer things in life Oz enjoys more than spending time with his brother and sister. See, ever since he was born, he was the Oz Man. Our dear friend Paula gave him his nickname when he was about 45 minutes old and as good nicknames will do, it stuck. Oz loves his Sissy and Zac. His spring break week has been filled with Oz and Sissy time and he’s loved it. He misses his brother but hopefully they’ll be getting together for birthday fun this week.

Oz has always marched to the beat of his own drum. Sometimes that’s gotten him ‘WTF’ looks, I’m sure he’ll receive more in life. For the most part, he doesn’t care. Or he doesn’t care enough to go ahead and conform to the norm. Good boy. Unfortunately, his wearing of the BDU’s has come to an end. He’s too big. He’s moved on to Duluth Trading company and luckily there’s one right down the street from his house in Minnesota. He bought himself a Levi’s jacket at Kohl’s the other day and I have to say, it’s pretty stylin’. There are few things you’ll talk him into if he has his mind set to something else (NO idea where he get’s that! It’s so ANNOYING!) Lucky for us, his choices are still on the good side and he’s only had the cops called on him when he’s looking for treasure in the woods behind his Dad’s house (multiple times. Ya, I know it looks like an adult is wandering through the woods. But he’s a kid. Just like the cops have told you three times now.) The first time the cops showed up with guns drawn through his Dad’s back yard. Luckily by then Oz was downstairs playing video games. 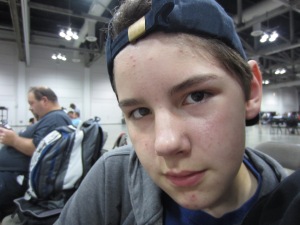 Oz has always been a deep thinker. Years ago in Texas he was very pensive as we were driving home from running errands and I asked him what was up. He replied that he just didn’t know if, when he grows up, he should smoke a pipe or cigars. I told him that those things will figure themselves out and not to stress about it. He visibly looked relieved. (By the way now that he see’s that his favorite thrower, Ross Bunchek, is a pipe smoker I do believe that issue has been decided.) Heh.

Not surprisingly, I’m not going to whine about my “baby” growing up too fast. A) He’s not a baby, hasn’t been from about 7 months or so. (Carrying him in the car seat gave me carpal tunnel for a couple of years. I’ve never been so happy to see a kid walk in all my life.) B. I’m honored to have him grow up into a young man. We know children who weren’t able to do that. And I’m so very thankful that another birthday is here with all of my children still winning.

But today is Oz’s day and we’re off for French Toast. And then he and Sissy are hot stepping it to the new Fast/Furious movie. And then we’re meeting them with friends at Laser tag adventures. And then food. Geez, I need more coffee.

Happy Birthday Oz. I’m incredibly proud of you. You roll with the punches of life and are able to quote Monty Python while doing it. Well done.

Gaiety is the most outstanding feature of the Soviet Union.