Monday Bacon: Walk it Off

I’ve been in sports since I was a tot. As much as I’d love to tell stories of hard nosed softball, soccer, or swimming coaches, the one coach/instructor that still brings chills of fear to my heart is my dance teacher in elementary school. Her name was Linda. She had very dark  hair, olive skin, and her smokers voice was loud and raspy. She was a tyrant. The fat lady on Dance Mom’s is a pussy cat compared to Linda.

She ruled with an iron fist. It didn’t matter if we were too young to to understand why we would get yelled at, we just knew that at all costs we wanted to avoid her rath. One of her biggest lessons of all? When you’re too tired to think straight…you walk it off. If anyone DARED sit down or (gasp) lay down in a heap on her floor? You’d be done. As in, Get the F! out of my dance studio and never return!

I think of her each time I see a new picture on the interwebz of an “elite” exerciser gasping for air in a puddle of their own sweat after a workout. In my opinion, their coaches are doing them a disservice. Yup. I do not argue the intensity or extremity of a WOD. I’ve done them, they’re hard. I get the same feeling of utter exhaustion after a Dan John complex. They’re quite horrible too. But I stay on my feet and walk it off. I am an adult, I am not injured, I am quite capable of not bringing drama to my workout sessions. I would much rather prefer that people who are new to this style of working out would learn to “walk it off” instead of appearing as an attention whore who must let everyone and their junkyard neighbor know that they just worked out. 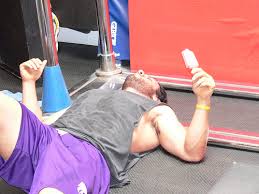 You would do far better coaching your clients through a workout and encouraging them to stay on their feet or at least just sit and cool down. Please?

If we die, we want people to accept it…The conquest of space is worth the risk of life.