I first met Tommy Suggs a few years ago while working at the gym in Wichita Falls. I had the chance to have a session with him learning the split snatch and was slightly taken aback by his calm and positive coaching. I responded to this coaching style with ferver and worked hard to please him. What this did was take MY frustration or MY needs out of the picture and put the focus on his teaching. I’ve never had a more useful training session. It was beyond awesome. 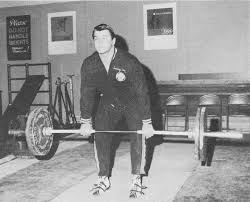 Tommy came back months later to shoot some videos (one of which is my favorite of him teaching Bigg the Olympic Style Press.) He would come to the gym early in the morning, sit by my desk, eat his green breakfast and we’d talk.  Our talks of life’s experiences and how they’ve shaped us were a treasure. Tommy is very spiritual and taps into both his Native American heritage and his past struggles to find peace in the present. It is also very apparent that whoever steps on to Tommy’s path, his wish for you will be peace, love, and awareness. Our talks of training progress (or usually my lack thereof) would always come back to where my head and my heart is at and how that affects my platform time. He’s my Yoda.

Whenever I was struggling, a calm note from Tommy would appear and he would give me very simple reminders on how to approach my situations. He never put others down but made me focus on ME and my reactions to my surroundings. There were some days when just seeing a note in my inbox were enough to find moments of peace. Ya, he’s that good.

Since I’m not close with my own parents, I treasured even more the timing of his entrance into my life. He was the first person I told when Bigg and I started getting closer and I firmly believe that his blessing for our relationship is part of the spiritual rope that holds us together when we struggle. So when Oz came in last night with the mail and told me that I had a “fun letter” I felt an instant rush of peace as I saw it was from Tommy. And again, he’s given me a simple reminder that will positively impact all aspects of my life.  Ya, he’s that good.

I’m incredibly thankful to have him in our lives. He is a treasure. Tommy, his wife Karen, and their friend Phil Toups started the Sweetwater Education Foundation to support the Native American teachers on the Reservations. Check out the site, you can find Tommy’s books there. Read from a master of the Iron Game and help a great cause.

…Give off light, or darkness…Be a candle, or the night.

For training opportunities at tosabarbell, call or text Juli at 320-296-9313. e-mail to jep6095@gmail.com At tosabarbell, I build relationships cultivated in a strength and learning environment. There is no 12 week magic pill program to strength but rather a lifetime commitment to be the very best and most useful human you can be. tosabarbell is a private, home grown gym with three lifting platforms; squat rack; prowlers; throwing implements; bars, bumpers and everything else needed for an effective strength and conditioning program. Straightforward barbell programming including the Olympic lifts; sound (read: not fancy bullshit) diet advance for weight gain or loss; and strong coaching will ensure you will meet your goals such as becoming stronger, more explosive, and better conditioned. I have been coaching teams and athletes for over 30 years. I grew up participating in various sports at various levels but was always drawn to those that require strength training. I have multiple local, national, and world records in the sports of Weightlifting and Highland Games Heavy Events as well as a combined total of 5 World Championships. My 5 years of training and coaching under Mark Rippetoe provided a wide range of influence from some of the top strength & conditioning and throwing coaches in the country. I will strongly encourage tosabarbell athletes to compete (and prepare you to do so.) However, tosabarbell is also for those who wish to be stronger and go through life feeling better. Matt WanAt is a retired Professional Strongman who competed frequently with Strongman Champions League in Europe. He played a year of D1 football with Iowa before concentrating on his Chemical Engineering degree in Iowa City. He is a native of Wauwatosa and still remains a staunch supporter of Tosa East. This blog will be a mixture of strength notes, coaching and nutrition tips, personal shit; bacon delicacies, and a whole lot of fun.
View all posts by tosabarbell →
This entry was posted in Uncategorized and tagged Barbell, Black Iron, Mentor, strength training, Tommy Suggs, Yoda, York. Bookmark the permalink.