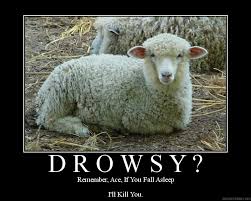 I remember vividly when I used to be a good sleeper. I was in my twenties. I never needed a ton of sleep but 6-7 straight hours each night was fine. Even the bed didn’t matter. I could sleep on a regular bed, a waterbed, an air mattress or even the ground when camping. Ahhhh, the good ‘ol days.

Then I had twins. And my Z’s had to eat one ounce every three hours or their preemie arse’s would land back in the hospital. And to feed them one ounce in the middle of each night took and hour. One hour for Za, one hour for Zac, and one hour for me to clean up; get the next set of bottles ready; and nap. By the time I returned to work I only had to wake up once each night to get them both fed but I was still up for a couple of hours to get things done. And that’s been my sleep pattern ever since.

I remember being so tired that on some Sunday’s after dinner, my folks would take the Z’s and tell me to go home and rest. I’d pass out on their couch, not having the energy to get the few blocks away to sleep in my own bed. I have no idea how I got through those first six months but I do know I chuckle when I hear of TWO parent’s complaining about lack of sleep for their ONE baby. Toughen up folks, it could be worse.

My time in Texas reminds me of those days. Up at 5:15am, to bed at 11:00pm (if I were lucky) and going Mach II in between. I was exhausted, always exhausted. My training sucked, my piece of mind sucked, and every part of my life was less than what it should have been. Just because I was tired.

There are countless things in my life that are better now that I’m where I should be, but good sleep is not one of them.  I finally realized that I wasn’t making it a priority so that’s on me.  Knowing that I will likely still wake up around 2-3a.m. I try to be a good girl and go to bed at 9pm. It makes me feel elderly, but it works. That way, if I DO wake up (BTW, once I’m up, I stay up for at least a couple hours) I’ve already clocked a good 5-6 hours of sleep. What I’ve also noticed, is that if I force myself to shut off the world and go to bed early, I’ m more likely to STAY asleep. So in the last couple of weeks, I’ve had at least four or five nights of 7-8 hours of sleep…at one time!

Sleep is the best meditation.