The Slutification of WW

Some of my happiest childhood memories revolve around Cabin time. The nearly 4 hour trek from Minneapolis to Grand Rapids with seemingly half of all other Minnesotans on Hwy 169 every Memorial Day weekend meant the kick off of summer. Oh sure, that first weekend was a working weekend. Open up the cabin; do all the dishes in case we had mice visitors over the winter; scrub; mow; rake; laundry; etc. It also meant taking a bath in the crystal clear waters of Lake Pokegama who’s ice melted away a few short weeks ago, if we were lucky. Think ice baths are fun? Thing again.

Cabin time also meant a stop at Patterson’s bait shop for a few perishable groceries and if I were a good girl? Comic books. Cabin time was the only place we afforded such silly things and I looked forward to it all year. I had stacks of them and of course my favorite? Wonder Woman. Duh.

See, even back then when I was a skinny 9 year old (yes, that’s the last time I was skinny), I knew that a strong looking woman was what I wanted to be. Thick legs that could leap anywhere; strong upper body that could lasso a whole pile of bad guys; cool stuff. When the television show came out, I was hooked. Lynda Carter, although not muscular enough in my opinion, brought my comic book hero to life. Strong; determined; a clear sense of right and wrong; fair; reasonable; with great hair and an even greater smile. And to top it all off? I guess she looked pretty good doing it all too, I dunno. I wasn’t paying attention to that. I just knew that it would be so nice to be ‘that good.’ To live each day to your principals; to be strong; to help others. She was the best.

Through all the years, the drawings of Wonder Woman have been fairly consistent. Always strong; always fierce. Some artists give her obnoxious boob jobs, whatev. But stuff like this? This has nothing to do with Wonder Woman… 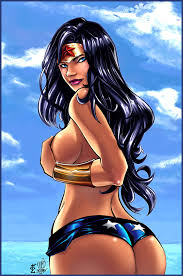 By the way, squats didn’t build that ass, a pencil did. Anyways.

Wonder Woman is lame. She flies around in an invisible jet, but she’s not invisible. I don’t get it.