It’s a big week in the Strongman world as the preliminary events for the Worlds Strongest Man get underway in Los Angeles. The pre-game talk has been slightly interesting to read. The usual trash talk on strength boards all over the internet; predictions on overall winner; basic silliness by people who sit in their basement and hit the bench every couple of days.

Everyone has their favorite picked out and I expect to read a lot of Monday morning quarterback reports during the two week competition. Oh well, that’s what makes the world go ’round I guess. I have a few favorites too, but I’ll keep those to myself. For now.

The WSM organization attempts to keep results close to the vest to (I believe) bolster television ratings when the competition is aired later this year. The trouble with this, obviously, is that we live in the land of the interwebz. Which means if you’re waiting to hear how the athletes are doing, you try friend as many people on facebook who are in L.A. taking pictures and posting updates. Heh.

The groupings and events are posted here. The athletes and their families are not allowed to post results of any sort but some pretty fun pictures have come out of their pre-game fun.

Bigg’s pal, Akos Nagy, seems to be taking it all in… 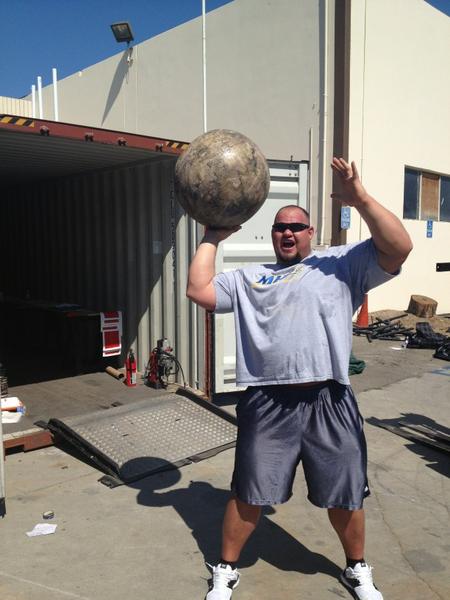 Here’s wishing all the competitors a meet that displays their hard work and preparation. One where they all walk away intact and as healthy as possible. And a week or two of soaking in the awesome that surrounds them.

For training opportunities at tosabarbell, call or text Juli at 320-296-9313. e-mail to jep6095@gmail.com At tosabarbell, I build relationships cultivated in a strength and learning environment. There is no 12 week magic pill program to strength but rather a lifetime commitment to be the very best and most useful human you can be. tosabarbell is a private, home grown gym with three lifting platforms; squat rack; prowlers; throwing implements; bars, bumpers and everything else needed for an effective strength and conditioning program. Straightforward barbell programming including the Olympic lifts; sound (read: not fancy bullshit) diet advance for weight gain or loss; and strong coaching will ensure you will meet your goals such as becoming stronger, more explosive, and better conditioned. I have been coaching teams and athletes for over 30 years. I grew up participating in various sports at various levels but was always drawn to those that require strength training. I have multiple local, national, and world records in the sports of Weightlifting and Highland Games Heavy Events as well as a combined total of 5 World Championships. My 5 years of training and coaching under Mark Rippetoe provided a wide range of influence from some of the top strength & conditioning and throwing coaches in the country. I will strongly encourage tosabarbell athletes to compete (and prepare you to do so.) However, tosabarbell is also for those who wish to be stronger and go through life feeling better. Matt WanAt is a retired Professional Strongman who competed frequently with Strongman Champions League in Europe. He played a year of D1 football with Iowa before concentrating on his Chemical Engineering degree in Iowa City. He is a native of Wauwatosa and still remains a staunch supporter of Tosa East. This blog will be a mixture of strength notes, coaching and nutrition tips, personal shit; bacon delicacies, and a whole lot of fun.
View all posts by tosabarbell →
This entry was posted in Uncategorized and tagged barbells, strength training, Strongman, WSM. Bookmark the permalink.