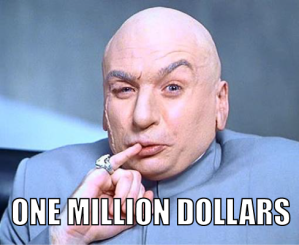 I’ll admit, I still laugh at the Austin Powers movies. While Fat Bastard was my favorite character, Dr. Evil was pretty fun. I remember the time he was going to hold the “laser” “beam” ransom and proposed to the UN (or something like that) his demand of “One MILLION dollars.” Of course he was laughed at because one million dollars didn’t hold much value to this political corporation. Shocker.

Poor Dr. Evil. This came to mind yesterday when thinking about the value of various things. Matt and I have been discussing the value of training advice, especially with so many internet guru’s. How folks won’t blink at the idea of buying $200 worth of absolute crap at the local GNC, how many sessions of solid coaching that will have a far greater impact on your training could that have bought? Well, four here. Four sessions to get you trained on your form and your programming. Chat up food in between sets and you’ve just walked away with a solid idea of what the hellz you’re doing for the next month in the gym rather than session after session of machine masturbation while chugging down your $200 GNC product.

Sad as it is, the general population does not value good coaching. They have bought into the idea that supplements can replace food. That machines can replace barbells. And that the local WAC trainer who uses terms like, “Muscle Confusion” knows what the fuck they’re doing. They are looking for the next best thing and reading stupid magazines expecting to read about them. HEY! Ya know what 98% of fitness magazines do? They sell products with fiction smashed in between the advertisements. Duh.

I had Oscar’s middle school lines coach in the gym last fall who wanted to get my advice on having open gym time after school and how to structure it. Admittedly, he said that he works out with a program that he read in a muscle and fitness mag 10 years ago and that’s what he wanted to do with the kids. After giving him some ideas on how to make best use of the kids’ time (based on experience and knowledge of other programs including John Welbourn’s CF Football) without driving the adult volunteers nuts, he said thanks, but he’ll stick to the magazine programming. Fok. Ok, don’t be sad when Oz won’t be there though. Cuz that “program” isn’t one and if you’re not going to have expectations or a 3 strike and you’re out rule during a middle school open gym time, you’re now running a day care. A FREE daycare. See? Cuz the kids won’t value it. The parents won’t value it. Good luck with that. It didn’t last long. Maybe a few weeks. Another shocker.

I had a client who was honest to god mentally and verbally abused by her former trainer. I saw it happen. She was extremely overweight and I guess he had her believing that his way was effective. It was incredibly uncomfortable to watch. When she started training here I laid down my style. Stern, yes. Abusive? No. Solid programming, strength training and when it’s not raining, we push the prowler. Track your food. That’s an order. And eventually I realized we weren’t working. See, abusive and so sore she would be in tears each week by the other trainer was what she was used to. She didn’t see value in getting her Squat numbers up (anyone telling you that you’re too fat to squat is a bad coach. Look elsewhere.) Or her bench numbers or deadlift form dialed in. She refused to track her food just saying, “I ate pretty good today.” Look, if you don’t value what I’m doing for you, we can’t work together. Fact. But it made me sad. I don’t pretend to speak for all strength coaches around the world but I whill say, when we lose one who needs help the most, it hurts.

But we can’t force value on others. If you’ve let others talk you into the fact that supplements outweigh solid training and programming; powder is more important than food; to sprint faster you just need to sprint more, and other rediculous notions I just can’t help you. I wish I could. Just park a platform outside of a GNC and teach people to deadlift instead of letting the Polo’d sales dude who doesn’t even lift talk you into what you need (which, by the way, will put commission in his pocket. He doesn’t care what it does for you.)

But if you have a good coach around, value them. Some come to mind. Streeter and Carrie in Redmond; Angie and Beau in Maryland; Alex in Canadia; Brian & crew in Barrington; Shawna in Long Island (who I still owe a phone call to. Crap, I suck at returning phone calls. True Story); Paulie and AoD in Brooklyn; Mike & Donna in Melbourne. Me. Ya, I’ll throw my hat in there. I’m a good coach. Very good. But if my work isn’t valued, I’m not for you.

Mojo. The libido. The life force. The essence. The right stuff. What the French call a certain…I don’t know what.

For training opportunities at tosabarbell, call or text Juli at 320-296-9313. jep6095@gmail.com tosabarbell is a private, home grown gym with three lifting platforms; squat rack; prowlers; throwing implements; bars, bumpers and everything else needed for an effective strength and conditioning program. Straightforward barbell programming including the Olympic lifts; sound (read: not fancy bullshit) diet advance for weight gain or loss; and strong coaching will ensure you will meet your goals such as becoming stronger, more explosive, and better conditioned. Juli has been coaching teams and athletes for over 20 years. She grew up participating in various sports at various levels but was always drawn to those that require strength training. She is a 2-time Master's Amercian Weightlifting Champion and holds six Master's American records. She is a Master's Weightlifting National Champion and holds three National records. She is a Master's Weightlifting World Championships Silver Medalist in 2016. Juli is also a Masters Highland Games World Champion and holds three World Records in the Braemar Stone; Heavy Weight for Distance, and Light Weight for Distance in the 45-49 class. Her 5 years of training and coaching under Mark Rippetoe has honed her coaching skills to be a top choice for you to reach your strength and conditioning goals. Juli will strongly encourage tosabarbell athletes to compete (and prepare you to do so.) However; tosabarbell is also for those who just wish to be stronger and go through life feeling better. Matt WanAt is a retired Professional Strongman who competed frequently with Strongman Champions League in Europe. He played a year of D1 football with Iowa before concentrating on his Chemical Engineering degree in Iowa City. He is a native of Wauwatosa and still remains a staunch supporter of Tosa East. This blog will be a mixture of strength notes, coaching and nutrition tips, personal shit; bacon delicacies, and a whole lot of fun.
View all posts by tosabarbell →
This entry was posted in Uncategorized and tagged Austin Powers, Dr. Evil, Strength Coach, tosabarbell, Value Added. Bookmark the permalink.