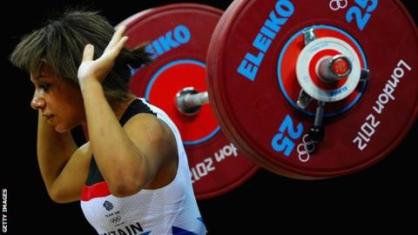 For those new to Weightlifting, the bar is on the wrong side of the lifter. photo credit: getty images.

Years ago, I was fortunate enough to take part in a weightlifting “weekend” when the Texas crew was dabbling in coming up with a new seminar. We had weightlifters from around the country along with coaches Jim Moser and Nick Frasca. I felt lucky to be chosen to take part in the weekend. Admittedly, I wasn’t a great weightlifter. Plus, I was old. Even at 44, I was the oldest lifter to go 5 sessions in two days. The youngest was Cali kid, Jonny Renker, who was around 16 or 17. Anthony Pomponio was there going back and forth with WFAC’s Bryan Fox. A great group of ladies and men and overall, a really fun weekend. By Sunday night’s session, I was completely fried. It was hard work and I hung in there.

At one point, I was going for a 55kg snatch. Something like that anyways. Low by today’s standards. I kept missing and Jim Moser finally told me, “you just don’t want it bad enough.” Now, as much as I appreciate and respect Jim’s coaching abilities and his history as an American weightlifter at York, I didn’t like it. To me, it was a bit flippant. Mostly though, it was unhelpful.

Like, if I step up to the bar and just tell it, ‘hey bar, I really want this. Like, totally bad enough. Shaka brah’ and the bar is all, “Okay Jules, I’ll give ya this one.” That’s not how this works, that’s not how any of this works. Believe me! I tried it in Germany. I said to that last Clean and Jerk, ‘heyyyyyy bar, I’m completely spent but we just need one more lift and I really really want it.’ I did that. FoShizzle. It didn’t work. Who’s fucked up in that scenario? I’d say the bar.

But not really. Because looking at my video, I didn’t pull the bar long enough. A horrible habit from learning how to lift with power cleans that I’m only months into fixing. I’ll get it but when I get tired, I go to bad habits. And that lift came off my legs about three inches above my knees instead of 7-8″ above the knees that would have put me into a far better position to extend and get under it, even in a power position. I’m learning. Doing is another thing.

At the end of the day. I never want to rely on “wanting it.” I want to rely on solid mechanics and knowing how to apply them. This pertains to throwing too. Obviously. Wanting a 70′ LWD this year didn’t make it happen. I came close. But no cigar and now I’ll  have to fix my mechanics so I have a better chance at doing so next year. And if I want that 90kg Clean and Jerk, I have some mechanical issues to fix along with managing my warm ups so I’m not zapped by the time that attempt rolls around. Basically I have so much to learn about weightlifting application that “wanting it bad enough” is so low on the To Do list, I can’t see it right now.

Marzena Karpinska from Poland misses a lift during the Women 48kg category event of the European Weightlifting Championship in Bucharest on April 6, 2009. Karpinska won the bronze medal of the category. TOPSHOTS/AFP PHOTO/DANIEL MIHAILESCU. (Photo credit should read DANIEL MIHAILESCU/AFP/Getty Images) For those new to Weightlifting, this is not the proper bottom position of a lift. Now you know.

Along those same lines, if I’m missing parts of lifts in practice, I do not believe that something about competition day magically fixes those mechanical errors. Yes, competition adrenaline can be helpful but as I’m learning, I need to shut down that adrenaline fast or I have nothing left an hour after my last snatch before my first clean and jerk attempt. (Thank you Chip Conrad for your advice and aloha on that subject. I’m already practicing differently and will use the information in my last meet. Mahalo!)

Mechanics. Practice. Repeat. That is my security blanket of lifting. Yes, there is an aspect to weightlifting of “manning up.” Meaning, lift the fucking weight. Matter over mind. However, if my shoulder is banged up (I hate having a banged up shoulder. My shoulders are ginormous and have always been strong. That I’m dealing with an ouchie one right now pisses me off) and I know it’s going to hurt when I slam 185 pounds or more over my head, I’ve got to dig pretty fucking deep to make that happen. How about if I, oh I dunno, jerk correctly so my shoulder DOESN’T hurt and I have all the confidence in the world about going overhead? Yes, I like that idea better.

There are times where I will vocalize an insecurity about a lift to Matt and he’ll almost flippantly state that I’ll be fine. For a while there, that wasn’t received very well (heh.) But then he put down his phone, looked me in the eye and said this, “You have succeeded at everything you set your mind to. You will figure this out too or find someone to help you do it and you’ll fix it. You’ll be fine.” Sometimes my husband is wicked SMAAHT. 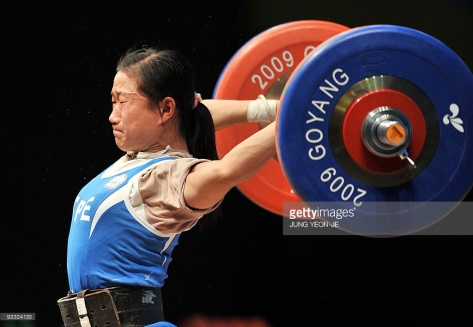 If you’re new to weightlifting, this is not the proper rack position. Now you know.  Photo credit: gettyimages

I have been reading articles and hearing people talk about how frustrating weightlifing is. Honestly, I don’t get it. If I’m using my feeling statements, it would go something like this, “I feel frustrated when newbs say weightlifting is frustrating.” Once someone says that, I disengage in conversation. Why?

Probably because I believe learning is fun. If I didn’t, I never would have made it past these four years in the Highland Games. (A Masters thrower told me to expect my numbers to start going down because I’ve tapped out my genetic potential. My reply? Dude, I’m still learning. What I lack in output I have the opportunity to make up for in mechanics. Don’t count me out yet.)  Now, this year I didn’t PR in the Highland Games. As annoying as that is, it’s understandable. As hard as I was hitting the fields, I was hitting the lifts and yes, 49 is awfully old to be a two letter athlete. So it’s likely that both sports were affected by the other.

We’ll see how next year goes (we’ve already decided to hit Savannah in early March for National Masters Championships and the Shammies in late March for my first 50 Highland Games!) I’m pretty stoked to turn 50. What that means is that my off season will focus on recovery. Nothing else. Drills and lighter lifts. I’ve been pushing this body hard for 3 years straight and my overweight, bloated self shows it. It’s time to back off; have fun, and LEARN!

And I’m excited. Not frustrated. Excited. I wonder if the frustration comes with bloated expectations? I dunno. I guess I have high expectations for myself but at the end of the day, an improvement is cause for celebration and a 1kg PR on your total, especially as a Masters athlete, is pretty fucking cool. At least that’s how I look at it.  But maybe that’s why I’m not frustrated. Heh.

In conclusion, weightlifting is bomb. I’m so happy I got back into it. It brought us to Germany; and Savannah (we love Savannah), and soon back to Buffalo where I’m bringing my own personal Chiropractor. (Well, I’m bringing my cousin Stacy who happens to be an amazing Chiropractor. Matt has a work thing so I texted her and said, “I need a partner in crime in a few weeks” and she came back with “I’m in.” I sure have cool cousins.) I’m having a blast figuring out the lifts. They’ve changed so much in just a year, thanks in large part to Mike Westerling with some major tweaks. They have a long ways to go. That’s a good thing. That means, what I lack in output, I can make up for in mechanics.

Always be yourself, express yourself, have faith in yourself, do not go out and look for a successful personality and duplicate it.

For training opportunities at tosabarbell, call or text Juli at 320-296-9313. e-mail to jep6095@gmail.com At tosabarbell, I build relationships cultivated in a strength and learning environment. There is no 12 week magic pill program to strength but rather a lifetime commitment to be the very best and most useful human you can be. tosabarbell is a private, home grown gym with three lifting platforms; squat rack; prowlers; throwing implements; bars, bumpers and everything else needed for an effective strength and conditioning program. Straightforward barbell programming including the Olympic lifts; sound (read: not fancy bullshit) diet advance for weight gain or loss; and strong coaching will ensure you will meet your goals such as becoming stronger, more explosive, and better conditioned. I have been coaching teams and athletes for over 30 years. I grew up participating in various sports at various levels but was always drawn to those that require strength training. I have multiple local, national, and world records in the sports of Weightlifting and Highland Games Heavy Events as well as a combined total of 5 World Championships. My 5 years of training and coaching under Mark Rippetoe provided a wide range of influence from some of the top strength & conditioning and throwing coaches in the country. I will strongly encourage tosabarbell athletes to compete (and prepare you to do so.) However, tosabarbell is also for those who wish to be stronger and go through life feeling better. Matt WanAt is a retired Professional Strongman who competed frequently with Strongman Champions League in Europe. He played a year of D1 football with Iowa before concentrating on his Chemical Engineering degree in Iowa City. He is a native of Wauwatosa and still remains a staunch supporter of Tosa East. This blog will be a mixture of strength notes, coaching and nutrition tips, personal shit; bacon delicacies, and a whole lot of fun.
View all posts by tosabarbell →
This entry was posted in Uncategorized and tagged Have Fun, Highland Games, Learn, Master's American Championships, Master's Highland Games, Master's Weightlifting, Olympic Weightlifting, Patience, weightlifting. Bookmark the permalink.