We ventured down to the Harley Davidson Museum yesterday for some Bacon. Yes, Bacon. It’s was a local radio station’s annual Baconfest and Bigg’s brother was on the ball enough to get tickets the day they went on sale since they sold out last year in short time. We’ve been pretty excited aboot this for about a month now and it didn’t disappoint.

Our line started with some Patrick Cudahy BLT Dip and I knew I started with my favorite. It wasn’t fancy or especially pretty but the flavors were tasty and served up with tortilla chips. Something I hadn’t considered going into this is how much I’d be eating so I quickly put aside any feelings of guilt for what I was about to do to a mostly healthy diet. 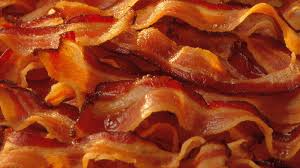 We grabbed plain ‘ol bacon after that and after the boys went and grabbed drinks, we got things underway in earnest. I know I’m forgetting things but here’s the list…

Deviled egg and bacon Bloody Mary’s. Those were tasty. At this point, we stopped long enough to realize that a person may indeed have their bacon limits. But we didn’t come to quit so we ventured forward. From the drinks, we had…

After a fun stop at the Blue Moon booth, I tapped out. I was able to force myself to taste the Bunzel’s  Bacon Mac’n’Cheese and their Bacon pulled pork, barely. The Bacon coma that came shortly afterwards was well worth it. As is the salt bloat I’ve got going on meow.

Now that we’ve got one of these under our belt, we’ve strategized on how to approach it next year. We’ll go at 1pm instead being there right at noon, the crowds had died down significantly by 1pm (about the time we were leaving) but there’s still plenty of food left. We can split it up and take a little break between sides (we actually missed half an aisle due to not wanting to fight the crowd.) This will be easier too with less of a crowd. Lastly, the day or two before Baconfest, I’ll water up to combat this salt intake. It’s good I can wear sweats to work cuz anything tighter than those will be a no go for today.

My first Baconfest was an absolute blast and we got some good ideas for new recipes. Special thanks to Bigg’s bro, TJ, who was on the ball enough to get us tickets right away.

The best way to cap off Bacon day? A hockey game, of course. My hockey Kid’s big brother plays for the Abbotsford Heat who were in town playing our Admirals last night. I got word late Saturday that Eddy’s folks were coming into town for it so we met them at the game and were able to catch up. It was a blast. The moment of the game? When the too drunk/too loud fans behind screamed “YOU SUCK 24!” Ya, that’s the elder Eddy and Papa Eddy started laughing as he was enjoying his ice cream. It was a good lulz.

Either you love bacon, or you’re wrong.

For training opportunities at tosabarbell, call or text Juli at 320-296-9313. e-mail to jep6095@gmail.com At tosabarbell, I build relationships cultivated in a strength and learning environment. There is no 12 week magic pill program to strength but rather a lifetime commitment to be the very best and most useful human you can be. tosabarbell is a private, home grown gym with three lifting platforms; squat rack; prowlers; throwing implements; bars, bumpers and everything else needed for an effective strength and conditioning program. Straightforward barbell programming including the Olympic lifts; sound (read: not fancy bullshit) diet advance for weight gain or loss; and strong coaching will ensure you will meet your goals such as becoming stronger, more explosive, and better conditioned. I have been coaching teams and athletes for over 30 years. I grew up participating in various sports at various levels but was always drawn to those that require strength training. I have multiple local, national, and world records in the sports of Weightlifting and Highland Games Heavy Events as well as a combined total of 5 World Championships. My 5 years of training and coaching under Mark Rippetoe provided a wide range of influence from some of the top strength & conditioning and throwing coaches in the country. I will strongly encourage tosabarbell athletes to compete (and prepare you to do so.) However, tosabarbell is also for those who wish to be stronger and go through life feeling better. Matt WanAt is a retired Professional Strongman who competed frequently with Strongman Champions League in Europe. He played a year of D1 football with Iowa before concentrating on his Chemical Engineering degree in Iowa City. He is a native of Wauwatosa and still remains a staunch supporter of Tosa East. This blog will be a mixture of strength notes, coaching and nutrition tips, personal shit; bacon delicacies, and a whole lot of fun.
View all posts by tosabarbell →
This entry was posted in Uncategorized and tagged Abbotsford Heat, bacon, Baconfest, David Eddy, MKE, strength training. Bookmark the permalink.