Monday Bacon: Weather or Not… 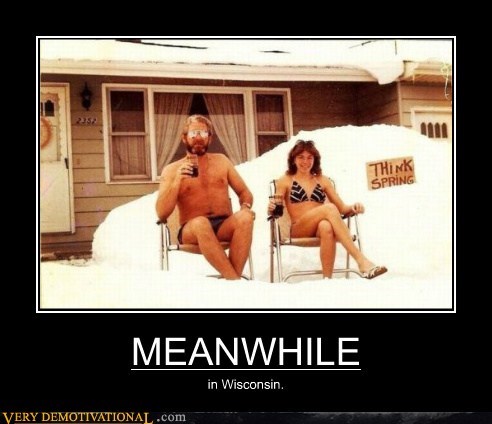 I remember when I used to get annoyed at the weather. Plan a family picnic? Rain. Easter Egg hunt? Snow. White Christmas? Brown grass. Want a brown grass Christmas due to traveling? Snow storm. I guess at some point in time, it finally clicked. I have no control over the weather and need to adjust accordingly.

Two years ago in Texas tested this weather zen. It was 100 degrees by March 31st and never really cooled off until October. I was renting a home with a pre-historic cooling system that shut off ONLY when it finally broke down and didn’t get action from the landlord for a week. Crabby doesn’t even begin to cover my mood. ADD in the fact that my Bigg guy would visit and bring an extra 30 degrees of heat on his own. I would jump in my car and go for a drive just to be able to have the air conditioning on full blast and HOPE to cool off slightly before going back to the heat. It was rough.

But I made it. Of course. It was a pretty good indicator that Texas wasn’t for me. I’m an up north girl. So up north I are. But it’s the back half of April and still snowing. We’ve been getting an hour here and there with beautiful glimpses of spring sun and warmth but it’s quickly covered back up by clouds, wind, rain, and cold.  Meh.

This spring is testing even the hardiest northerners. My college student had a snow day on Thursday due to a 7-9″ snow dump in her little cornfield town. This girl; who loves winter; who loves the cold; who is one of the last one’s off the outdoor rink each winter, had this to say about the recent snow fall, “This sucks.” Heh.

But soon it will warm up (probably) and we’ll forget all about the late snows and wet days (I hope.) And that’s why I don’t sweat the weather, cuz unless it’s a horrible disaster (flooding on it’s way to Grand Forks again, they have something to be upset about) we’ll be okay. So keep the heavy coats out an extra week or so; have an Irish Coffee; and chill. Heh, get it? Chill?

Ahhh, earth day, the only day of the year where being able to hackey sack will get you laid.

For training opportunities at tosabarbell, call or text Juli at 320-296-9313. e-mail to jep6095@gmail.com At tosabarbell, I build relationships cultivated in a strength and learning environment. There is no 12 week magic pill program to strength but rather a lifetime commitment to be the very best and most useful human you can be. tosabarbell is a private, home grown gym with three lifting platforms; squat rack; prowlers; throwing implements; bars, bumpers and everything else needed for an effective strength and conditioning program. Straightforward barbell programming including the Olympic lifts; sound (read: not fancy bullshit) diet advance for weight gain or loss; and strong coaching will ensure you will meet your goals such as becoming stronger, more explosive, and better conditioned. I have been coaching teams and athletes for over 30 years. I grew up participating in various sports at various levels but was always drawn to those that require strength training. I have multiple local, national, and world records in the sports of Weightlifting and Highland Games Heavy Events as well as a combined total of 5 World Championships. My 5 years of training and coaching under Mark Rippetoe provided a wide range of influence from some of the top strength & conditioning and throwing coaches in the country. I will strongly encourage tosabarbell athletes to compete (and prepare you to do so.) However, tosabarbell is also for those who wish to be stronger and go through life feeling better. Matt WanAt is a retired Professional Strongman who competed frequently with Strongman Champions League in Europe. He played a year of D1 football with Iowa before concentrating on his Chemical Engineering degree in Iowa City. He is a native of Wauwatosa and still remains a staunch supporter of Tosa East. This blog will be a mixture of strength notes, coaching and nutrition tips, personal shit; bacon delicacies, and a whole lot of fun.
View all posts by tosabarbell →
This entry was posted in Uncategorized and tagged barbells, Earth day, Red River flooding, spring snow, strength training. Bookmark the permalink.