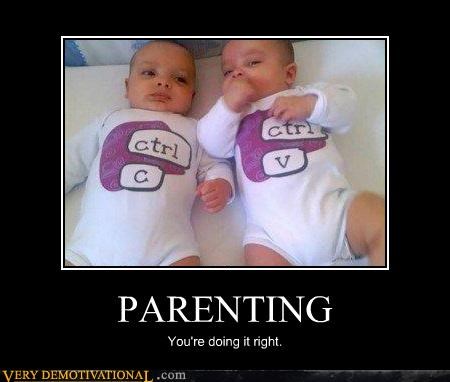 Another memo I’ve missed in life. The one where the word ‘NO!’ went out of style for parents. Reason, we want to reason with our four year olds now. NO! is too harsh, we don’t want to raise our kids as harshly as our parents raised us. Sometimes we were even spanked, hard. That is barbaric (read: effective) and has no place in today’s kinder and gentler society.

Bullshit. Did I stutter? Bullshit.

We had dinner at the Bigg guy’s folks house last night with part of the crew including strong sister Kitty and her two daughters (pops was out keeping the streets safe on the day shift.) Their oldest daughter, one and a half year old Kloey is about as cute as they come. Tons of personality and a baby belly to boot, she’s practicing the art of “playing the crowd.” And it works, mostly. But something went down at G’ma’s that crossed the line and she got a loud and stern ‘NO!’ that caused tears but also came with an understanding that ‘we don’t got time for that.’ And of course, once she realized Ma wasn’t messing around, she chilled and went on with life. Point goes to Kitty.

And here’s the lesson: the word ‘NO!’ is a line drawn in the sand for kids. It will not be crossed, but if it is, you’re in for it. Remember those days? Those, ‘wait until your father gets home’ days? Only Ma doesn’t play that way so shit hits the fan now…and probably again when Pa gets home.

Giving kids reasons as to why we ‘really shouldn’t do that honey’ gives them the point. Why? Cuz they don’t care. At all. They win and that’s all they care about. Cuz they’re kids. There are going to be times in life where you’re going to have to be harsh (damn! I hate when my parent’s are right.) ‘NO!’ is one of those times. Kids don’t get to grow up thinking everything is negotiable and then pouting when they’re 23 and don’t get their way. See how that works? Kids learning from parents that ‘NO!’ happens throughout life is ok. They’ll be okay, in fact, they’ll accept it and move on. Unless you don’t teach them. Duh.

I’m going to the bathroom since I don’t have a kid in my arms.

For training opportunities at tosabarbell, call or text Juli at 320-296-9313. e-mail to jep6095@gmail.com At tosabarbell, I build relationships cultivated in a strength and learning environment. There is no 12 week magic pill program to strength but rather a lifetime commitment to be the very best and most useful human you can be. tosabarbell is a private, home grown gym with three lifting platforms; squat rack; prowlers; throwing implements; bars, bumpers and everything else needed for an effective strength and conditioning program. Straightforward barbell programming including the Olympic lifts; sound (read: not fancy bullshit) diet advance for weight gain or loss; and strong coaching will ensure you will meet your goals such as becoming stronger, more explosive, and better conditioned. I have been coaching teams and athletes for over 30 years. I grew up participating in various sports at various levels but was always drawn to those that require strength training. I have multiple local, national, and world records in the sports of Weightlifting and Highland Games Heavy Events as well as a combined total of 5 World Championships. My 5 years of training and coaching under Mark Rippetoe provided a wide range of influence from some of the top strength & conditioning and throwing coaches in the country. I will strongly encourage tosabarbell athletes to compete (and prepare you to do so.) However, tosabarbell is also for those who wish to be stronger and go through life feeling better. Matt WanAt is a retired Professional Strongman who competed frequently with Strongman Champions League in Europe. He played a year of D1 football with Iowa before concentrating on his Chemical Engineering degree in Iowa City. He is a native of Wauwatosa and still remains a staunch supporter of Tosa East. This blog will be a mixture of strength notes, coaching and nutrition tips, personal shit; bacon delicacies, and a whole lot of fun.
View all posts by tosabarbell →
This entry was posted in Uncategorized and tagged Parenting, raising strong kids, strength training, tosabarbell. Bookmark the permalink.