Posted on December 4, 2013 by tosabarbell 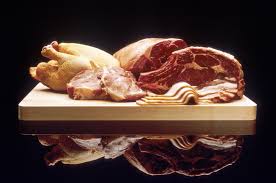 Normal as in, what’s the big deal to eat like this every day?  Sure, maybe not in mallow and yams fashion, but everything else. Bread; cereal (yes, even the “high protein” Kashi shit); pastries; syruppy yumminess; orange juice; apple juice; soda/coke/pop (whatever your region calls it); pasta (lots of it); rice and beans; meat in sugar sauce (most sauces are sugar, that’s what makes them nummy. Duh); Chips (I still say that if Doritos would just sell the cool ranch salt in a jar I’d never have to eat another chip again in my life); sugary coffee drinks (dudes, if it has 4+ pumps of syrup and whipped cream, stop calling it coffee. Duh);  anything low fat (think chemical shit storm. Please, may I have a big tall glass of chemical shit storm? Thanks so much); sugar…in all forms. Sugar food, sugar drink, sugar candy, sugar veggies, sugar on fruit, sugar sugar sugar. By the way, when is the last time these people actually tasted food?

And we’re extreme. Protein, leaner these days since the Bigg man is losing some weight which is helping him sleep better and keeps him alive since his snoring was forcing me to restrain from reaching for the ASP every time he woke me up. Protein in the morning (just finished my egg and egg white scramble with cheese); protein for snack; protein for lunch (with salad) and protein for dinner. Extreme. One of my favorite comments in the past when describing how we eat (when asked, and even then I hesitate in answering) was, “I’d get tired of eating all that meat.” Huh? Anyways. (By the way, two weeks later of him eating fewer carbs and just paying attention in general to what he’s eating has resulted in over 20 pounds of weight loss and visible abs. Men suck;)

Our carbs come here and there as needed. Nothing silly. Last week while on our roadtrip to Minnesoooota I ate two Hawaiian bread buns cheese sammiches after two pieces of Peanut Butter toast before we left. All that bread left me feeling like crap for two days. Yuck.  As tasty as it is in the moment, I do not appreciate feeling like that. By the time we finally ate dinner that night, I scarfed down an entire plate of fajita meat as if I had just trekked through 80 miles of a sugar desert trying to get to Protein mountain. Ya I know, drama much?

And fat. We heart fat. Olive oil is always within reach while cooking. Butter. We heart butter too. All real food really. Food that’s tasty, but see, we can taste it cuz we’re not handicapped by a sugar palate. When I’m feeling crazy enough for something other than coffee, I pick up a Cinnamon Dolce Latte and here’s where I confuse the poor Barista’s…“half a pump of the cinnamon syrup, no whipped cream, extra shot of espresso.” Which starts this dance, ‘so you want half the amount, two pumps of syrup?’ ‘No. I want half a pump of syrup. See? Half of one pump.’  “Uhhhhhh, just half a pump?” ‘Yes, just half.’ “Ok, and you’d like whipped cream?” ‘No. No whipped cream.’

Every. Time. Which is why I only have it in me to brave it a couple times each winter. By the time we’re done with this dance I’m too tired to remind them about the extra shot of espresso. Poor me.

And we’re extreme. It really struck me last weekend that folks view our eating as extreme. This reality baffles me but I have to admit that in all likelihood, our holding on to this diet baffles those around US. After all, the US food pyramid has said all these years that we should eat lots of carbs and then the “food” makers make us all these delicious boxed treats. They wouldn’t lie would they? My weight watchers nutritional “expert” said I can eat whatever I want as long as I keep it in my “points” range. They can’t be wrong, it’s working! No dear, it’s working because you’re actually watching the amount of calories you’re eating. The fact that they continue to advise that it’s ok to shit within a range of “points” means they actually have no understanding of what the carbs and sugar do to you systemically. They are a money making business, see? They make money off fat people and as you Yo Yo with them year after year while paying them, they win. Cuz the only thing they taught you is to decrease your calories so when you stop doing that, you gain weight again. I hate WW. A lot.

We’re extreme. Us. And we’ll keep it that way. I’ll hold on to this diet as strongly as people who eat crap will hold on to theirs. It’s the food religion. Who’s right? Who’s wrong?

Ask not what you can do for your country. Ask what’s for lunch.

For training opportunities at tosabarbell, call or text Juli at 320-296-9313. e-mail to jep6095@gmail.com At tosabarbell, I build relationships cultivated in a strength and learning environment. There is no 12 week magic pill program to strength but rather a lifetime commitment to be the very best and most useful human you can be. tosabarbell is a private, home grown gym with three lifting platforms; squat rack; prowlers; throwing implements; bars, bumpers and everything else needed for an effective strength and conditioning program. Straightforward barbell programming including the Olympic lifts; sound (read: not fancy bullshit) diet advance for weight gain or loss; and strong coaching will ensure you will meet your goals such as becoming stronger, more explosive, and better conditioned. I have been coaching teams and athletes for over 30 years. I grew up participating in various sports at various levels but was always drawn to those that require strength training. I have multiple local, national, and world records in the sports of Weightlifting and Highland Games Heavy Events as well as a combined total of 5 World Championships. My 5 years of training and coaching under Mark Rippetoe provided a wide range of influence from some of the top strength & conditioning and throwing coaches in the country. I will strongly encourage tosabarbell athletes to compete (and prepare you to do so.) However, tosabarbell is also for those who wish to be stronger and go through life feeling better. Matt WanAt is a retired Professional Strongman who competed frequently with Strongman Champions League in Europe. He played a year of D1 football with Iowa before concentrating on his Chemical Engineering degree in Iowa City. He is a native of Wauwatosa and still remains a staunch supporter of Tosa East. This blog will be a mixture of strength notes, coaching and nutrition tips, personal shit; bacon delicacies, and a whole lot of fun.
View all posts by tosabarbell →
This entry was posted in Uncategorized and tagged extreme diets, tosabarbell, Weight Watchers. Bookmark the permalink.