I’ve known Paulie for about five years now. A Brooklyn-er, is that the same as a New Yorker? I forgot to ask. Although he and his wife, Becca (AoD…don’t ask) said that when they moved from the city to Brooklyn, they were concerned that there wouldn’t be immediate shops and food available like in NYC. Heh. For us small town Milwaukee folk, Brooklyn is huge and you have everything you need within a five block radius.

Paulie and Becca have been solid BFF’s for years and when I stopped traveling so much for work, I missed my bi-yearly trip out to see them. ADD in the fact that I talk about them so much and Bigg hadn’t had a chance to meet them yet and we decided we needed to rectify that. So we did.

We picked a weekend where we could visit for a few days and then Matt would fly on to Scandihoovia for work. We landed on Friday afternoon and immediately kicked off the weekend that I would label as : Friends, Fun, and Food. It was amazing.  When I told Paulie that Bigg was asking for authentic, Chinatown Xiaolongbao (Soup Dumplings), Paulie was on it. Matt was so excited that by Friday, I had banned the words ‘Soup Dumplings’ I was so tired of hearing them. Uhhhhh, but then I tasted them. 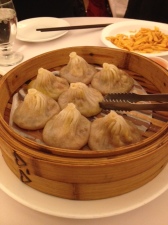 We had a lot of amazing Chinese food Friday night but the Soup Dumplings? The best. So good that they were allowed to be spoken of again. Heh. OH! Paulie gave me a great coaching session on how to use Chop Sticks. I’m not perfect, but I’m getting better.

We hung out, drank Bourbon and Rye and just enjoyed being together. If a perfect weekend between good friends gets any better than this, then it was our weekend PLUS one of us winning the lottery.

On Saturday, we had great roast beef for lunch in Sheepshead Bay here:

Roll N’ Roasters hasn’t changed much since this commercial, or since it opened over 40 years ago. The roast beef was savory but light so double meating (yes, double meating is a word) my sammich, giving me over 60g of protein wasn’t SO filling that we had to skip pie. OH! They DO have salads there, but we saw the pie first so…well, ya know. Pie.

Dinner that night was at the local Wiseguy hangout, Two Tom’s. We were treated like family, never had an empty glass, enjoyed amazing steak and pork chops and fit right into the family style feel of a place that has been going strong for 65 years. OH! There was a long table of patrons when we walked in, clearly enjoying themselves. By the end of the night, it felt as if we were part of the group, just sitting off to the side at the kids table. Heh. Comfortable, like a big loud Italian family. It was awesome.

Our Dim Sum breakfast the next morning was one for the books. Overwhelming doesn’t even beGIN to cover the amounts of food being placed at our table. I got some more chopsticks lessons in and really, by the end of it all, I killed it. I started practicing with straw covers, little lettuce pieces, anything I could get my stix on. I’d never had Dim Sum before and I’m afraid to have it again anywhere but there. OH! In both cases during our Chinese dinner and breakfast, we were the only haole’s (minus me and Paulie) in the joint. Want good local food? Go where the locals go.

A trip to Brooklyn wouldn’t be complete without grabbing some snacks at Jubilat polish market. We hit it at a good time with an English speaking woman behind the counter who was very helpful. It was fun for Matt too who got to see a lot of foods he grew up with being cooked by Buscia. And pickles on the floor…

We skipped the pickles, got some cheesecake instead. Cuz, vacation.

Of course we worked off a little bit of all of this delicious food training at their South Brooklyn Weightlifting Club. The training groups that we jumped in with were just amazing to watch. On Saturday morning, I watched one very tall and somewhat skinny dude deadlift what was heavy for him without ever losing his determination or form. Paulie has lifters from all walks of life with all types of goals and is able to walk the group giving each one cues for a better rep. The groups are focused yet light with talking and joking here and there but it’s clearly work time and I like that. I’ve been to lots of gyms where group settings still have people lifting heavy, but there’s so much goofing off during it that it’s distracting for me. It also, I’ve noticed, allows others who don’t want to work very hard to blend in the goofiness and not get everything out of a session that they should. THEN you try to get a spot from one and they’re dicking around so much that I’ve booted them off my lift. Go play somewhere else, I’m lifting.

Anyways. Of course the games minion had to get in the action…of course! 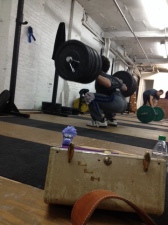 Overall, it was an amazing weekend. One of my favorites. Celebrating friendships and not only watching them bring a lifestyle of strength and hard work to everyone who walks in their door with the best equipment available but being taken care of by them to make our weekend filling and fun. Getting a chance to stretch our legs a bit and take some Brooklyn walks to get coffee or snacks felt good too after being cooped up by this whole polar vortex thing here in Wisconsin. Sharing good friends with Bigg was nice and now he understands why I love these guys so much.

Thank you thank you to Paulie and AoD for an amazing weekend and to my Bigg guy for making it happen. OH! All these carbs in three days makes for one helluva training session on Monday morning. Mmmmmmm, carbs.

Friendship is unnecessary, like philosophy, like art…. It has no survival value; rather it is one of those things which give value to survival.

For training opportunities at tosabarbell, call or text Juli at 320-296-9313. e-mail to jep6095@gmail.com At tosabarbell, I build relationships cultivated in a strength and learning environment. There is no 12 week magic pill program to strength but rather a lifetime commitment to be the very best and most useful human you can be. tosabarbell is a private, home grown gym with three lifting platforms; squat rack; prowlers; throwing implements; bars, bumpers and everything else needed for an effective strength and conditioning program. Straightforward barbell programming including the Olympic lifts; sound (read: not fancy bullshit) diet advance for weight gain or loss; and strong coaching will ensure you will meet your goals such as becoming stronger, more explosive, and better conditioned. I have been coaching teams and athletes for over 30 years. I grew up participating in various sports at various levels but was always drawn to those that require strength training. I have multiple local, national, and world records in the sports of Weightlifting and Highland Games Heavy Events as well as a combined total of 5 World Championships. My 5 years of training and coaching under Mark Rippetoe provided a wide range of influence from some of the top strength & conditioning and throwing coaches in the country. I will strongly encourage tosabarbell athletes to compete (and prepare you to do so.) However, tosabarbell is also for those who wish to be stronger and go through life feeling better. Matt WanAt is a retired Professional Strongman who competed frequently with Strongman Champions League in Europe. He played a year of D1 football with Iowa before concentrating on his Chemical Engineering degree in Iowa City. He is a native of Wauwatosa and still remains a staunch supporter of Tosa East. This blog will be a mixture of strength notes, coaching and nutrition tips, personal shit; bacon delicacies, and a whole lot of fun.
View all posts by tosabarbell →
This entry was posted in Uncategorized and tagged Carbs, Dim Sum, Friends, Roll 'N Roaster, SBWC, Sheepstation, Soup Dumplings, Tom Tom's, tosabarbell. Bookmark the permalink.