Posted on February 5, 2014 by tosabarbell 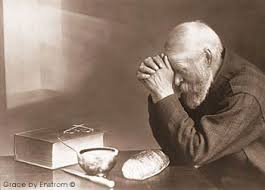 Growing up in Minnesota, it is likely that this picture by photographer Eric Enstrom  taken in 1918, was hanging somewhere near the kitchen of most Scandinavian homes. I remember specifically looking up to our version of the painting during our table prayers and wondering if I was doing it as well as the old man.

In the event that this picture was NOT present, it is likely this one was…

This picture represents comfort and consistency for me. I adore it and will be looking for a good version for our home when I get to Scandinavia one of these days with Bigg.

The basic, Lutheran style table prayer though is the Doxology. ‘Be present at our table Lord…’ Now, the good thing was that in most cases when this was sung, a potluck was about to follow. Gawds I love the church potluck dinners. Every hotdish imaginable PLUS an entire table of desserts! Seriously. And Lutheran’s love their Potlucks. We’d potluck for just about any kickoff or celebration and it made this little fat kid so very happy. In our old Brooklyn Center days, the church was big enough that they built a huge friendship center and when the potlucks got moved from the old fellowship hall they got even bigger. Giddyup.

But before we ate, we sang the Doxology. Well not me cuz I have a horrible voice. But it wasn’t quite as bad as my Dad’s and he’d be up there belting it out. Yowzer. (Side note, I remember many times during Sunday services when my Ma would hot step it up to the front to motion to Dad to turn his mic off during the singing. Heeehee.) I don’t remember all of the words exactly but I do remember it starts off, Be present at our table Lord…

Be present. Wow, that’s a pretty good message for us . How present are we these days between our smart phones; our ipads; our televisions; our nook games. Really. How often are we present in the moment of what we’re doing? Spending time in Brooklyn with Paulie and AoD really made me think of it. They are rarely on their phones. Oh they’re handy enough so that when I’d text over that we’re on our way they’d respond right away but it was rare when those phones are out. Whereas it’s common for me and Bigg to be accessing our phones throughout an entire 40 minute dinner. 40 minutes. Seriously. We can’t put it down long enough to engage in each other? It makes me crazy. Crazy enough that the new rule is phones away at the table. I keep mine out in the event that kids need me but getting on it is not allowed. Can we live without the Facebook for an hour?

Seriously. A few weeks ago, we went and had a beautiful Italian meal, stayed engaged the whole time and had a wonderful time but my stop to the powder room gave Bigg the chance to get the phone out and check the FB. Fok! Enough! It was a total buzzkill. Can we not, oh I dunno, OBSERVE our surroundings for a few minutes without getting online? When is the last time you observed your surroundings? There is NOTHING happening on the FB that’s more important than connecting with people who are next to you.

Put away the phones. Parent’s get a slight pass in the event they need to be accessible. So you get it out and put it on the table but you don’t jump on it the first moment there’s a lull in the conversation. Show your kids how to be present. There’s even commercials on the tele now where parents bribe their children to engage with some type of shitty food. Well ok, if the only way you can get your kids off the phone is to feed them KFC, congratulations. You’re raising another  yet another teenager who can’t hold a 2 minute conversation with anyone and who craves shitty food. Yippee.

Get comfortable with being still. Quiet. Shut out the noise. Be present.

Do not dwell in the past, do not dream of the future, concentrate the mind on the present moment.

For training opportunities at tosabarbell, call or text Juli at 320-296-9313. jep6095@gmail.com tosabarbell is a private, home grown gym with three lifting platforms; squat rack; prowlers; throwing implements; bars, bumpers and everything else needed for an effective strength and conditioning program. Straightforward barbell programming including the Olympic lifts; sound (read: not fancy bullshit) diet advance for weight gain or loss; and strong coaching will ensure you will meet your goals such as becoming stronger, more explosive, and better conditioned. Juli has been coaching teams and athletes for over 20 years. She grew up participating in various sports at various levels but was always drawn to those that require strength training. She is a 2-time Master's Amercian Weightlifting Champion and holds six Master's American records. She is a Master's Weightlifting National Champion and holds three National records. She is a Master's Weightlifting World Championships Silver Medalist in 2016. Juli is also a Masters Highland Games World Champion and holds three World Records in the Braemar Stone; Heavy Weight for Distance, and Light Weight for Distance in the 45-49 class. Her 5 years of training and coaching under Mark Rippetoe has honed her coaching skills to be a top choice for you to reach your strength and conditioning goals. Juli will strongly encourage tosabarbell athletes to compete (and prepare you to do so.) However; tosabarbell is also for those who just wish to be stronger and go through life feeling better. Matt WanAt is a retired Professional Strongman who competed frequently with Strongman Champions League in Europe. He played a year of D1 football with Iowa before concentrating on his Chemical Engineering degree in Iowa City. He is a native of Wauwatosa and still remains a staunch supporter of Tosa East. This blog will be a mixture of strength notes, coaching and nutrition tips, personal shit; bacon delicacies, and a whole lot of fun.
View all posts by tosabarbell →
This entry was posted in Uncategorized and tagged Doxology, Grace photograph, Minnesota history, Scandinavia, tosabarbell. Bookmark the permalink.