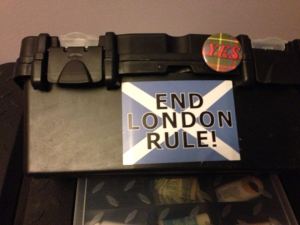 Last Wednesday evening, Matt and I stayed a wee bit out ‘O the center square so had to catch a cab to bring us home after we celebrated the First Pint at the Tastle Cavern in Inverness. Since our Flat we shared was just down the street, this became our ‘Cheers’ for the trip.

When I walked up to the cab, a YES sticker was proudly displayed in the window and when I jumped in, an End London Rule sticker was on the dashboard. We struck up conversation with the driver and away we went. Now, I don’t have a dog in this fight. I’m not Scottish. At all. I can give you my opinion on the Haole’s coming to Hawaii and the negative impact it had (and has) on the locals cuz I DO have a dog in that fight. But not this one.

I’ll be honest when I say I was struck by the passion of these Yes patriots. They are solid in their argument; they are strong in their conviction, and they are willing to continue the fight if the vote doesn’t go through for Independence. The NO vote has sensibility; currency concerns along with military and social services questions. Not quite as sexy but running an empire of such different cultures and history isn’t really supposed to be sexy eh?

As I type this, the results are slowly coming in. I have Sky News on and while the YES vote is hanging tight, the NO numbers are rising. Who knows what it will be when I wake up and finish typing this. I have my guesses but we’ll see. And the answer is…

Nope. Scotland will remain part of the United Kingdom. PM Gordon Brown has promised that commitments he made to give Scottish Parliament more power would be followed up on. Time will tell on that. That is something I’ll be watching more closely than the actual vote. A politician in power keeping promises. We’ll see.

It was an absolutely fascinating time to be in Scotland and made an already amazing trip even more so.

So for all of Scotland today…

In my end is my beginning.

Everyone in our flat at some point

For training opportunities at tosabarbell, call or text Juli at 320-296-9313. jep6095@gmail.com tosabarbell is a private, home grown gym with three lifting platforms; squat rack; prowlers; throwing implements; bars, bumpers and everything else needed for an effective strength and conditioning program. Straightforward barbell programming including the Olympic lifts; sound (read: not fancy bullshit) diet advance for weight gain or loss; and strong coaching will ensure you will meet your goals such as becoming stronger, more explosive, and better conditioned. Juli has been coaching teams and athletes for over 20 years. She grew up participating in various sports at various levels but was always drawn to those that require strength training. She is a 2-time Master's Amercian Weightlifting Champion and holds six Master's American records. She is a Master's Weightlifting National Champion and holds three National records. She is a Master's Weightlifting World Championships Silver Medalist in 2016. Juli is also a Masters Highland Games World Champion and holds three World Records in the Braemar Stone; Heavy Weight for Distance, and Light Weight for Distance in the 45-49 class. Her 5 years of training and coaching under Mark Rippetoe has honed her coaching skills to be a top choice for you to reach your strength and conditioning goals. Juli will strongly encourage tosabarbell athletes to compete (and prepare you to do so.) However; tosabarbell is also for those who just wish to be stronger and go through life feeling better. Matt WanAt is a retired Professional Strongman who competed frequently with Strongman Champions League in Europe. He played a year of D1 football with Iowa before concentrating on his Chemical Engineering degree in Iowa City. He is a native of Wauwatosa and still remains a staunch supporter of Tosa East. This blog will be a mixture of strength notes, coaching and nutrition tips, personal shit; bacon delicacies, and a whole lot of fun.
View all posts by tosabarbell →
This entry was posted in Uncategorized and tagged Bagpipes, Scotland The Brave, Scotland Votes NO, Scottish Independence, tosabarbell, Yes vote. Bookmark the permalink.