The first time I heard the term ‘Mates’ was while watching the movie,  The Man From Snowy River (to this day, one of my all time favorite movies.) There was a scene when the superstar Clancy handed his horse over to Jim Craig and gave his condolences to Craig about his father. He then went on to say, “He was a good mate” which earned the respect of other ranch workers for Craig.

Huh. It made an impression. Mate is a big deal. Special. Now sure, it could just be a different way of saying friend in other parts of the world but I just didn’t get that impression. I envisioned Clancy and Henry Craig at a campfire; out in the Australian mountains and wilderness; taming the wild together having formed a bond that was different than friendship. Friendship is special, sure. We extend ourselves to others and learn more and more about them as we bond. We’re there for each other in thick and thin when possible and carry each others secrets to our graves.

But I had a feeling Mates was just a wee bit different. To me, Mates represented a commonality among peers; the ability to either quietly or loudly exist together in all conditions, brief as they may be. Paths crossing and picking up exactly where things were left the last time. A switch that turns on. Aye, g’day Mate. A twinge at goodbye but the security that we’ll meet at the next campfire, whatever that looks like.

A good Mate. A treasure.

Enter our trip to Scotland. When we knew we were going, Matt and I booked a B&B on the park side of the river. It seemed quaint and had a great location. That was plan A. Up until mid June when Stephanie Lathrop put up a notice in one of our throwing group’s FB pages showing the layout of the flat they were renting with two extra rooms. Hmmmm, I says to the Bigg man, hat kinda sounds fun. The location is closer to the center of the city (and as it turns out, within stumbling distance to the Castle Tavern which became the Tastle Cavern after another Melanie, one of our flat mates renamed it. heh.) 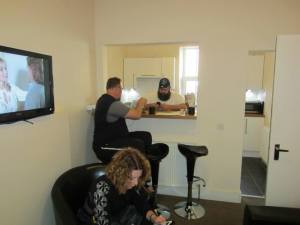 Bigg and our flat mates Bret and Stephanie getting their electronics groove on.

Now we hadn’t met either of them (having blown off the ClawBque the year prior at Enumclaw due to the fact that I was on my feet all day volunteering and then had to go throw the next day. Old people get tired ya know!) but listening to them on Fork Talk episodes gave us a little insight to the fact that these folks know how to rumble. So we cancelled the quaint and went for the rumble.

Thanks gods. Add in the fact that Melanie Mellinger, who’d I thrown with last fall in Kirksville and this spring at The Arnold was taking the other room and shit just got serious. True story.

As we made our way out to Tastle Cavern one last time, Mel peeked out her window and gave me possibly the spookiest picture of all;) Love ya!

We quickly connected and the weekend was more than we could ever have imagined. They introduced us to THEIR good friends, Max and Yvonne Sadtler and I quickly thought of the term, Mates. That’s them. Common interests; common humor; common cussing, ya know, the important shit. Though Yvonne didn’t throw, she took advantage of playing golf (her passion) at some of the best courses in the world (I think, I don’t know golf. I DO know that when she talked about playing, her eyes lit up and you could feel the excitement she had for her playing. It was awesome!)

Our times shared on the field; on the way to the field; on the way home from the field; at home; the hobbit bathroom; Melanie making grilled cheese sammiches for all at breakfast; Staci’s smooth southern drawl; dinners with Max & Yvonne; saying “It’s fooked” 2000 times a day; Candy Sprinkles grabbing the mike; Hoss’ help with the hammer and having them all to help celebrate jobs well done. Coffee in the morning; bar/ TT stops on the way home where we get to meet cool German World Champions; funeral crashing (yup, that happened); Tastle Cavern; Curry Dinner; Cigar smoking with Yvonne; Emmerdale; so much laughter I can’t even log it all, everything.

Now I’m back in ‘tosa, my hubby is on his way to St. Petersburg, and my mates are back home safe and sound. But I miss them. I miss the festivities; the camaraderie, the knowledge that I’ll be getting out of bed each morning knowing I will laugh many times throughout the day.

Cheers Mates. Until next time.

Friends will keep you sane, Love could fill your heart, A lover can warm your bed, but lonely is the soul without a mate.

For training opportunities at tosabarbell, call or text Juli at 320-296-9313. jep6095@gmail.com tosabarbell is a private, home grown gym with three lifting platforms; squat rack; prowlers; throwing implements; bars, bumpers and everything else needed for an effective strength and conditioning program. Straightforward barbell programming including the Olympic lifts; sound (read: not fancy bullshit) diet advance for weight gain or loss; and strong coaching will ensure you will meet your goals such as becoming stronger, more explosive, and better conditioned. Juli has been coaching teams and athletes for over 20 years. She grew up participating in various sports at various levels but was always drawn to those that require strength training. She is a 2-time Master's Amercian Weightlifting Champion and holds six Master's American records. She is a Master's Weightlifting National Champion and holds three National records. She is a Master's Weightlifting World Championships Silver Medalist in 2016. Juli is also a Masters Highland Games World Champion and holds three World Records in the Braemar Stone; Heavy Weight for Distance, and Light Weight for Distance in the 45-49 class. Her 5 years of training and coaching under Mark Rippetoe has honed her coaching skills to be a top choice for you to reach your strength and conditioning goals. Juli will strongly encourage tosabarbell athletes to compete (and prepare you to do so.) However; tosabarbell is also for those who just wish to be stronger and go through life feeling better. Matt WanAt is a retired Professional Strongman who competed frequently with Strongman Champions League in Europe. He played a year of D1 football with Iowa before concentrating on his Chemical Engineering degree in Iowa City. He is a native of Wauwatosa and still remains a staunch supporter of Tosa East. This blog will be a mixture of strength notes, coaching and nutrition tips, personal shit; bacon delicacies, and a whole lot of fun.
View all posts by tosabarbell →
This entry was posted in Uncategorized and tagged Beer, Candy Sprinkles, Emmerdale, Fork Talk, Hoss, Inverness, Man From Snowy River, Mates, Mattress Ranch, MWC2014, Whisky. Bookmark the permalink.