I was wondering how I’d be able to handle my nerves going into Scotland. I tend to get pretty nervous but usually calm down once I step on the field and get moving. This worked pretty well overall. On Friday, after warming up with the hammer a bit, I was feeling good; nice and focused and then I looked across the parkway and saw this… 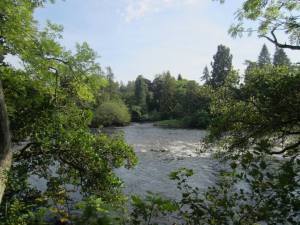 …srsly. I walked over, took a few big breaths and just let it in. Throwing in Scotland. Hot damn! A nice little distraction before getting started. A good reminder, ‘Hey Jules, you’re throwing stuff in Scotland. Whatever happens throughout the weekend, this is the shit.’ FoShizzle.

My goal for the end of day one was to be in the top 3. Hammers and Caber are my poorest events right now so to get out unscathed was my goal. Hammers are hammers, only this time with hills. Goodie. I did ok on the light, got near my PR but really struggled with the heavy. A 3rd place in each though kept me in the running and I was just happy to get the hellz away from the hammer cages. The caber was very nice, I believe around 15′ and 65# so completely doable. It had a nice taper on the bottom but was a bit top heavy with a twist towards the top. I was first up, blah! It felt good but was a bit difficult to manage. I was happy to turn in but a 12:07 wasn’t going to do it. On my second try, I had the weight in the back and just played with it long enough to get worn out. 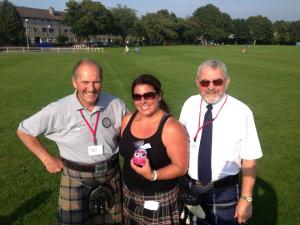 …awesome Caber judges. They pointed out things people were doing who were succeeding and failing at turning the caber. Finally, things started to click. See, so often in Highland Games cues are repeated from Games to Games and while I understand concepts, I don’t fully comprehend their application. This time though, AhHaaaaaa. Helpful.

But mostly? This guy:

Mark Wechter of Portland. I was throwing in a group with his wife, Victoria, who I’d briefly met at Enumclaw. Big smile, big hair (more on her later) and so much genuine nice she almost glows from it. Good people.

Now, I’m used to well intentioned mens coming up and giving me instructions through out Games. I’m NOT used to these instructions being concise, to the point, and completely useful in the moment. SRSLY. Mark has an excellent coaching eye and is able to give one thing to improve on, yell it from the sidelines while I’m struggling with the log and suddenly I’m no longer struggling. It was awesome. And thanks to all of their advice (including helpers Justin and Leslie) and I turned my last attempt a perfect 12:00. Tell you what, it was one of the most exciting moments of the Games. I’ve tried to work hard at Cabers coming into it and to apply practice plus excellent coaching makes me feel pretty fuzzy inside.

On day two, Mark had more good insights on stones and weights and I’ve already put them into play here at home during practice. Then came day 3. One event. The WOB. Now, my season started with the WOB being the most solid thing I was doing out there. 12, 13, 14 with the 28# and 13 to 16 or 17 (once in Indiana) with the 21 pounder. Then July happened and my WOB took a major poo all over my Games drawers. True story.

I’ve worked at getting it back and hitting 16′ with the 21 pound in Cherry Valley late August was helpful. But this was Scotland. Add a knock off bar and enough people told me that even looking at the bar will make it fall off (which brings me to effective trash talk. That won’t happen again. You want to trash talk me and try to get in my head I will walk away. I won’t be as rude as the trash talk attempter-that’s a word, really. But I will walk away. True story.) So when we got to the field for our last event, I was as nervous as I’d ever been.

I had already planned on coming in a foot early due to nerves and the knock off bar so it was going to be 12′. But I was nervous enough that I decided 11′ would be better. Things get a bit fuzzy here. I believe I made 11 but missed my first 12′. Too much tacky, no more tacky. 12 and 13 were better I think but I really have no idea. All I know is that it was around 13′ or 14′ when Mark came up and told me to settle down. This is my good event, just chill out.

Then we started talking about training. Ya know, normal gym talk. It completely took me out of the WOB and let me picture other things. When it was my time to come up again, I was significantly calmed down. Ok, time to just throw. And I did. I made it to 17 and missed all three in various fashion, but none of them due to nerves. I’ll take it.

As the first whisky and beer were handed to me, I looked around for Mark and couldn’t find him. See, although I kinda knew he was purposely distracting me, it worked. Good coaches are like that. Sneaky.

There are lots of people who were incredibly helpful throughout the weekend that will impact my throwing even beyond Scotland, I’m thankful for them all. Michelle Crownhart gave me some more Caber advice which I implemented. Bret Lathrop gave me some encouragement on the hammer just when I needed it (I don’t always need to hear everything I’m doing wrong;) A Scottish ‘well done‘ from the judges here and there, so awesome.

But it’s rare when I’m coached in a way I directly respond to. Mark did that, and even got sneaky when he was doing it. I’ll always be grateful for that. Thanks coach.

For training opportunities at tosabarbell, call or text Juli at 320-296-9313. jep6095@gmail.com tosabarbell is a private, home grown gym with three lifting platforms; squat rack; prowlers; throwing implements; bars, bumpers and everything else needed for an effective strength and conditioning program. Straightforward barbell programming including the Olympic lifts; sound (read: not fancy bullshit) diet advance for weight gain or loss; and strong coaching will ensure you will meet your goals such as becoming stronger, more explosive, and better conditioned. Juli has been coaching teams and athletes for over 20 years. She grew up participating in various sports at various levels but was always drawn to those that require strength training. She is a 2-time Master's Amercian Weightlifting Champion and holds six Master's American records. She is a Master's Weightlifting National Champion and holds three National records. She is a Master's Weightlifting World Championships Silver Medalist in 2016. Juli is also a Masters Highland Games World Champion and holds three World Records in the Braemar Stone; Heavy Weight for Distance, and Light Weight for Distance in the 45-49 class. Her 5 years of training and coaching under Mark Rippetoe has honed her coaching skills to be a top choice for you to reach your strength and conditioning goals. Juli will strongly encourage tosabarbell athletes to compete (and prepare you to do so.) However; tosabarbell is also for those who just wish to be stronger and go through life feeling better. Matt WanAt is a retired Professional Strongman who competed frequently with Strongman Champions League in Europe. He played a year of D1 football with Iowa before concentrating on his Chemical Engineering degree in Iowa City. He is a native of Wauwatosa and still remains a staunch supporter of Tosa East. This blog will be a mixture of strength notes, coaching and nutrition tips, personal shit; bacon delicacies, and a whole lot of fun.
View all posts by tosabarbell →
This entry was posted in Uncategorized and tagged Great Coaching, Inverness, MWC 2014, Nerves, tosabarbell, Weight Over Bar, WOB. Bookmark the permalink.