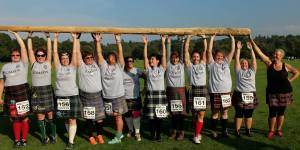 When the ladies decide to lift the Caber overhead, they left me & Meike in the dust;)

On Thursday in Scotland, Matt and I checked out of our first night’s hotel and headed into the City Center where our shared flat was. We were able to drop our luggage off at the hotel in a safe room and went on our way to take in the city. After a little shopping, we stopped back at Tastle Cavern for some lunch and a(nother) beer. At the picnic table next to us, some definitely American people were talking and after introducing ourselves, it turns out that the woman was throwing in my group. Edie from Colorado is energetic, very grounded, down to earth. Her hubby is just as comfortable and we had a nice chat.

Something Edie said though kind of stopped me in my tracks. She said that she had heard we have some very intense people in our group and she was wondering if we’ll have fun. My response? “Bullshit.” Pretty direct eh? Welcome to me.

Now, while I did not know all of the ladies in our group, other people I’ve thrown with did and ALL had good things to say about each other. I hadn’t thrown yet with the Germans but when I introduced myself to Michaela Pennekamp, she instantly gave me a hug and told me how nervous she was (interestingly enough, she also made a comment that she was worried whether or not our group would be fun. Huh.) I liked her immediately. What you see is what you get. I like that. No hidden agenda. Real. Comfortable enough with herself that she just puts it out there. I respond warmly to that. Add Petra and Meike (the only other competitor shorter than me. I struggle) and they were absolutely a delight. Big smiles! Lot’s of laughter. The Petra v. Becky challenge, hilarious.

Festive. That’s how I would describe our group. Incredibly festive. Having a flat mate in my group was perfect. I could go on for months how awesome Stephanie is but I already kinda have. Heh. I hadn’t met Becky or Kenna yet but had heard wonderful things about them. And they were spot on. Laid back, fun, supportive, festive. Becky had some sort of challenge rivalry with Petra and watching the two of them go back and forth for three days was a real treat.

As I mentioned earlier, I’d briefly met Victoria at Enumclaw. Friendly, warm, funny, fun, sparkly, put together on the field more than I was for my wedding. True story. And that HAIR!!!!! 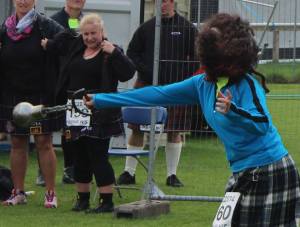 We had a chance to talk with Allison and her hubby a bit at the Cavern prior to throwing. Enthusiastic, friendly, excited. So fun. Little Meike. Powerful, adorable, who brought prizes for all of us that her daughter made and I didn’t realize until yesterday that it was actually an awesome little bag tucked into a stuffed toy. I met Gretchen right away on Thursday when we got to the field and she opened with: “I get to meet all these people I’m Facebook friends with!” AFTER some huge dude came up and gave her a hug. Well done Gretchen. Well done. Heh. 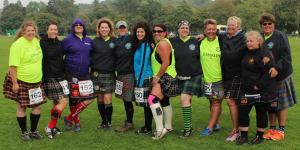 When we were waiting to get the green light to begin the Heavy Weight for Distance event, one of our judges told us he wants a picture of his favorite group. Of course, we obliged.

But then we made him get in on the action… 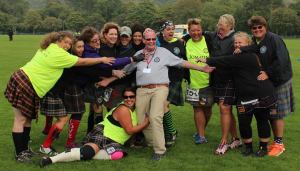 Of course Mona and I always have fun pushing each other to throw just a little bit further and we’re fortunate for that. Edie was a great competitor and always kept herself positive and upbeat. She was also the Caber Champion of the group. Well done!!! We ALSO ran into her at the Cavern late into Sunday night…

I don’t know how “in focus” Edie was by this time of night. Hopefully better than me:/

I think I said goodbye to her. But we were on about hour 12 of a little Scottish drinkfest here so no clue.

As for our group? It was the best. The absolute best. We laughed. We cheered. We passed the PR’a around until I refused it when I bombed out of the next event after wearing it (I’m uber superstitious girls, sorry.) With each event won, Michaela was right there to give hugs. Sportsmanship was off the hook. Smiles were a plenty; hugs were even better; and our group?

All of them had restlessness in common.

For training opportunities at tosabarbell, call or text Juli at 320-296-9313. jep6095@gmail.com tosabarbell is a private, home grown gym with three lifting platforms; squat rack; prowlers; throwing implements; bars, bumpers and everything else needed for an effective strength and conditioning program. Straightforward barbell programming including the Olympic lifts; sound (read: not fancy bullshit) diet advance for weight gain or loss; and strong coaching will ensure you will meet your goals such as becoming stronger, more explosive, and better conditioned. Juli has been coaching teams and athletes for over 20 years. She grew up participating in various sports at various levels but was always drawn to those that require strength training. She is a 2-time Master's Amercian Weightlifting Champion and holds six Master's American records. She is a Master's Weightlifting National Champion and holds three National records. She is a Master's Weightlifting World Championships Silver Medalist in 2016. Juli is also a Masters Highland Games World Champion and holds three World Records in the Braemar Stone; Heavy Weight for Distance, and Light Weight for Distance in the 45-49 class. Her 5 years of training and coaching under Mark Rippetoe has honed her coaching skills to be a top choice for you to reach your strength and conditioning goals. Juli will strongly encourage tosabarbell athletes to compete (and prepare you to do so.) However; tosabarbell is also for those who just wish to be stronger and go through life feeling better. Matt WanAt is a retired Professional Strongman who competed frequently with Strongman Champions League in Europe. He played a year of D1 football with Iowa before concentrating on his Chemical Engineering degree in Iowa City. He is a native of Wauwatosa and still remains a staunch supporter of Tosa East. This blog will be a mixture of strength notes, coaching and nutrition tips, personal shit; bacon delicacies, and a whole lot of fun.
View all posts by tosabarbell →
This entry was posted in Uncategorized and tagged Awesome Group, Festive Highland Games, Ladies 45-49 Group, MWC2014, Victoria's Hair. Bookmark the permalink.