Posted on October 6, 2014 by tosabarbell 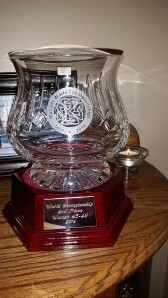 If you’ve known me for more than 10 minutes, you know I love prizes. I love giving them, I love getting them. I’ve written about them before. Small or large, it doesn’t matter. Just the idea that someone was thinking of you and took a spare moment or two to show you. Kind of like mailing a handwritten letter, I still do that. I like getting handwritten letters too but it does seem to be an old fashioned form of communication. One happy thing about the interwebz is that most of our bills now are delivered online so at least the only mail I receive aren’t just bills. It’s junkmail. But not bills so I’ll take it.

Whenever Matt comes home from faraway lands, he usually brings some prizes. It could be a sticker for our equipment boxes; some booze that we know is a must to tide us by for the long winter ahead (or at least until he goes back to Finland again which is December soooooo, we get to drink up that Minttu. GiddyUp) He doesn’t always bring back prizes, I mean, there are only so many fresh Dates you can eat from Dubai (which are fucking delicious by the way) but his month on the road to some of our favorite destinations brought in quite a haul…

Prizes from Russia and Finalnd. More KLM houses, Karl Frazer chocolates (my favorite); and the coolest little pack of shot glasses for my equipment box nestled in a leather pouch from Russia. Minttu regular and Minttu Black plus one star Jaloviina. Winter hats for the kids, first class travel packs (we have a gazillion but you never know when you need a weird pair of socks, an eye mask, and a toothbrush) and a bottle of Vitamin C which isn’t really a prize.

I’ve put off writing about the prizes in Scotland mainly because this is the last topic I have to write about the trip and I’m still mushy enough about it all to not want to completely let it go. But the prizes were completely off the hook and overwhelming. First off, months ago, Karyn Dallimore sent a quick note out asking for my Jacket size. My what? That’s a little random but I hadn’t met Karyn yet and since this was my first World Championships, I hadn’t experienced her not-so-little custom. What did she need my jacket size for??? Uhhhhh, THIS!

My new MWC pullover, an amazing prize from Karyn Dallimore. Yes, there’s chalk all over it. What else would I wear when I’m out throwing??

But hey ya know what? That was only the tip of the iceburg. SRSLY.

The funny thing is there is already a lot missing from this picture. Assume that when you put a small bottle of Scotch in each swag bag it won’t last long enough to be in the prize picture…true story. The Minion gummies were hilarious. The first bag was from my Flat mate Melanie who handed them to me and said, ‘I know you’re probably not going to eat these but I saw them and thought of you.’ Soooo awesome!!!! I got the second bag the next day on the field from Champ Mona who said, ‘I know you’re not going to eat these but we saw them and knew you had to have them.’ So adorable.  The Canadia eh? flag is another favorite and I’ve been fighting off my daughter for that and the Maple Leaf headphones. The maple suckers are long gone and what you can’t see is a small charm with a wee one holding a caber. Two pins, one from my favorite Indiana fellow Master’s thrower Dawn Higgins and a MWC pin. Both are staying off the kilt until I get in some pin keepers back locksto make them stay put. I lost my Women’s Heavy Athletics pin on the field at some point in Scotland and was kind of LeSad about that. I didn’t even notice until I was talking with Judge Steph Stewart (who I didn’t even KNOW was in Scotland until late into Sunday night at the Tastle Cavern) and she suggested I get those to avoid losing pins in the future. Thanks again Steph! (I’m actually pretty proud I even remember that conversation;)

The pink bag held a few treats and an awesome key chain in it was a prize for each of us in our group from German thrower Meike whose daughter actually put these together for each of us! How freeking adorable is that! What treasure! A cowboy sized belt buckle; various YES prizes from the locals; a Caber car decal; medals and very cool Games shirts which are of course all cut up now but one will go in the gym…or at least parts of it.

The kilt patches are a treasure and though I put in a valiant effort to sew them on, on my own, I threw in the towel and brought them to our seamstress for help. But here’s an idea of what mine will look like…

…PLUS a Clevenger Sheafs patch! Matt’s is similar minus the Arnold and Pilot patches.

Even after all that I KNOW I’m still missing some prizes. OH! Nessie! It’s not like we can leave Inverness without a little memento of Neessie, 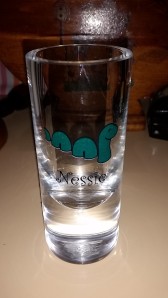 We actually had stopped at the Whisky shop on our way out of the city but it wasn’t open yet and we chose not to wait the 10 minutes or so until it did to bring home Whisky prizes. (The fact that I was having a hard time with a massive Whisky hangover may have contributed to that;) So we stopped in a shop next door and looked for a shot glass to bring home for a friend who collects them and didn’t have one from Scotland. We found this solid shot glass with cute little Nessie on it for her and continued on to the airport. Well, in between the store and the airport, we decided to keep the glass and get her another one. And I’m glad we did (don’t worry, the one we found Jasmine was pretty cool.)

Even with that I STILL know I’m missing prizes. It’s like a prize extravaganza!! But with all that said, nothing beats the most important prizes of all…

…new friends. Sharing this all with them. 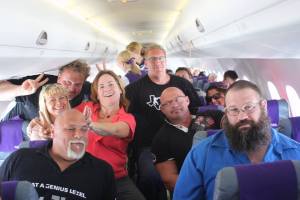 I’m just going to get all the use I can out of this picture;)

Crazy flights with awesome International Games Throwers and their wives.

Memories that will hopefully stay with us all for a very, very long time.

HEY! Talk about prizes, see that awesome ballcap Matt is wearing. Well, his skin doesn’t really like the sun but he forgot his hat at home and we didn’t find one during quick browsing at Tesco so Grant Oliver, Mona’s awesome guy, handed Matt this hat and said,  ‘take it, I have an extra.’ Not only is it an awesome cap, but just so selfless and thoughtful (that’s Grant. An amazing man.)

Prizes. We haz them…and then some. And I am so thankful for each and every one.

Blessed are they who have the gift of making friends, for it is one of God’s best gifts.

For training opportunities at tosabarbell, call or text Juli at 320-296-9313. jep6095@gmail.com tosabarbell is a private, home grown gym with three lifting platforms; squat rack; prowlers; throwing implements; bars, bumpers and everything else needed for an effective strength and conditioning program. Straightforward barbell programming including the Olympic lifts; sound (read: not fancy bullshit) diet advance for weight gain or loss; and strong coaching will ensure you will meet your goals such as becoming stronger, more explosive, and better conditioned. Juli has been coaching teams and athletes for over 20 years. She grew up participating in various sports at various levels but was always drawn to those that require strength training. She is a 2-time Master's Amercian Weightlifting Champion and holds six Master's American records. She is a Master's Weightlifting National Champion and holds three National records. She is a Master's Weightlifting World Championships Silver Medalist in 2016. Juli is also a Masters Highland Games World Champion and holds three World Records in the Braemar Stone; Heavy Weight for Distance, and Light Weight for Distance in the 45-49 class. Her 5 years of training and coaching under Mark Rippetoe has honed her coaching skills to be a top choice for you to reach your strength and conditioning goals. Juli will strongly encourage tosabarbell athletes to compete (and prepare you to do so.) However; tosabarbell is also for those who just wish to be stronger and go through life feeling better. Matt WanAt is a retired Professional Strongman who competed frequently with Strongman Champions League in Europe. He played a year of D1 football with Iowa before concentrating on his Chemical Engineering degree in Iowa City. He is a native of Wauwatosa and still remains a staunch supporter of Tosa East. This blog will be a mixture of strength notes, coaching and nutrition tips, personal shit; bacon delicacies, and a whole lot of fun.
View all posts by tosabarbell →
This entry was posted in Uncategorized and tagged Highland Games, Inverness Scotland, MWC 2014, Nessie, Prizes. Bookmark the permalink.