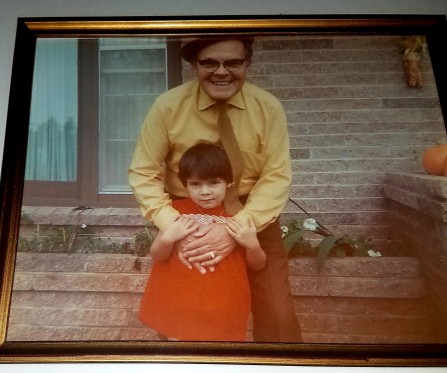 Me and my Grandpa on my Baptism day. I loved my Grandpa. Look at his hands. They were always strong and reaching for another hand to hold whether it be mine or my Grandma’s. I still have this dress. It speaks to a day I don’t remember but probably enjoyed. I hope cake was involved. I just really love cake.

One of the trickier aspects of sharing personal stories is that, while the writer has had a lifetime to process information, the reader is “hearing” it for the first time and it can be a bit shocking. I guess this is one of those times. Writing about dark events that happened in the past are just that, in the past. They do not speak to who I am today, but to paths crossed in the yesteryear.

I believe, or at the very least, my observation is that men and women don’t want to talk about sexual abuse because they are afraid that others will judge who they are today. See, when you are sexually abused, you generally don’t feel very good about yourself whether presently or in the past. Being sexually abused is dirty. It is painful. It is confusing. It rocks the entire foundation of your existence and I’m not even going to add the words, “especially in the case of…” Each case is horrible. Each story weaves a tale with few chances of Happily Ever After.

I imagine that feelings may be somewhat similar after a sexual assault. It’s scary and dirty and how will people look at “me” because they can’t process that I’ve been sexually assaulted (or abused.) See, this is a difference between people who have been sexually abused or assaulted and people who haven’t. They don’t understand. Why would they? At the pits of their existence this evil does not dwell. It’s uncomfortable, gods it’s so uncomfortable.

We have come a long way in addressing sexual abuse. From the Catholic church “scandals” (imo, ‘scandal’ is too pretty a word for the rampant Pedophilia of the Catholic church. I am guessing, and I’m probably right, that the Catholic church is the largest Pedophilia racket in the history of the world. It is still happening today and the Pope claims that the “reporting” of these RAPES are the work of the devil. I literally hope hell has a special place waiting for him. He is the Big Daddy Pimp of them all. Rot, fucker.)

Back in 2002, the Boston Globe shined a big ‘ol spotlight on the Catholic RAPES and people started talking about it. At least, they started to talk about how others were raped and molested and in small ways began to open doors on talking more freely about personal sexual abuse. I am lucky enough to have married two men (one at a time, duh) who, when I shared that I had been sexually abused starting from the age of 9, were absolutely and unequivocally shocked. I mean, it’s shocking, I get it. See, they came from the other side. The side where ‘these types of things’ don’t happen. Ever. That’s a good thing. I’m glad they didn’t have to be exposed to something as ugly as sexual abuse. That they or someone they love don’t have those memories.

Because I remember. I remember every detail, even before I was raped for the first time. My brother wanted to play a game called baseball where each base was a sexual act and did I want to play? Uh, no. I’m not comfortable with that. In fact, I am so uncomfortable with that I’ll tell mom. Mom will make sure that doesn’t happen again. But no, Mom didn’t make sure. She said that was ridiculous and don’t ever talk like that again.

Shame strike 1, 2, and 3. Shut up Jules, no one here cares. It’s ugly and it’s dark and don’t ever bring it up again. That was a direct order, don’t ever talk about anything like this again. I was on my own. I was 9. On my own with a pedophile for a brother.

I remember the first time I was raped. I remember exactly where and when. I remember the smells; the pain; the shame; the confusion, and most of all the overwhelming sadness that I was no longer a little girl. I knew I wasn’t an adult or a teen or anything else but I for sure was no longer a little girl. That was the end of my childhood. In one night at 9 years old. I was dirty and no longer a good girl and I was alone. I have many pictures of my childhood and maybe I’m the only one who can see how sad 9 year old Juli’s eyes looked after that summer. But I know when I look at those pictures how much I changed. I remember.

Those feelings lasted for many years of my life. I would look at the High School football quarterback (he was a cutie. Black hair and bright blue eyes and pretty nice to everyone) and think, I am not worthy of a nice boy like that. I’m dirty. I’m not a good girl. I don’t even get a popular bad boy who probably wasn’t even that bad. I’m only worthy of crappy boys who don’t treat girls well but that’s okay because I’m not worthy of being treated well. What a fookin’ mess. I am very fortunate I stepped out of that fog and was even to do it fairly early in life. I didn’t waste one more day thinking I wasn’t worthy of a good man. I raised the bar for those around me and especially myself. I’m lucky. I healed. There’s scar tissue of course, but my mind is clear and I mostly love who looks back at me in the mirror (I have a scalp thing going on from frying my melon to the point of blistering at a Games last June. It’s not awesome. I don’t like seeing that in the mirror. Other than that, I’m good.)

I have viewed the openess of many actors and actresses who have felt free enough to share their past assaults against women and men in power who for so long felt that their jobs depended on keeping their mouths shut. That is an abuse of power and I’m glad for them that they were able to free themselves. However, an increasingly disturbing trend is gaining steam much like a tsunami wave we may be powerless to stop when we want it to stop. That is, men and women can suddenly accuse another of abuse and it is assumed to be true. Jobs lost in an instant. Families blown apart. Public humiliation. The #metoo train has gained enough speed that it can’t be stopped for one of the most important American rights, due process.

Feminism has become more about white male bashing than equality and equity. The white male is our enemy. They are the plantation owners of present time and they are evil. Now, I don’t buy into this. First off, I mean, many of you have met my white, male husband. So you understand how I believe him to be the greatest of all men who walk the planet. Evil comes in all shapes and sizes. It comes form of men wearing robes at Sunday mass; it comes in the form of a brother; it comes in the form of a female teacher; a boss; a stranger; a friend. Evil lurks and we are so quick to turn on each other than no one is stopping to ask, “Does this have anything to do with my life today?” or “Am I qualified to have an opinion on whether or not this is true?” or “Does this affect me or someone I love?” We jump. We ask one accused to be crucified while make excuses for another.

It is one of the most dangerous games we can play against each other and it terrifies me. I have watched the ever increasing trend of sexual abuse and sexual assault become political and I am concerned that the progress we’ve made in bringing it out in the open will be lost among the political hatred towards an opposing group screaming, “BURN HER!” We minimize the strength and fortitude shown when putting abuse behind us and living our best lives with a hashtag. A fucking hashtag. Have we become so simple fucking minded that we can’t use our words so we think putting a hashtag in front of some trend is going to give it power?

Believe an accuser. Believe the accused. Be happy that sexual abuse hasn’t touched your life or if it has, be proud that you’ve overcome the pain of it. If you haven’t overcome the pain of it, get help. Very few of the hashtag warrior have YOUR best interest at heart rather, they want to make some type of social media statement. Fill your life with peace. Gawds we need peace these days. Peace and kindness and if you’re really lucky, deep fried cheese curds at Lakefront Brewery.

See how lucky I am.

Our prime purpose in this life is to help others. And if you can’t help them, at least don’t hurt them.

For training opportunities at tosabarbell, call or text Juli at 320-296-9313. jep6095@gmail.com tosabarbell is a private, home grown gym with three lifting platforms; squat rack; prowlers; throwing implements; bars, bumpers and everything else needed for an effective strength and conditioning program. Straightforward barbell programming including the Olympic lifts; sound (read: not fancy bullshit) diet advance for weight gain or loss; and strong coaching will ensure you will meet your goals such as becoming stronger, more explosive, and better conditioned. Juli has been coaching teams and athletes for over 20 years. She grew up participating in various sports at various levels but was always drawn to those that require strength training. She is a 2-time Master's Amercian Weightlifting Champion and holds six Master's American records. She is a Master's Weightlifting National Champion and holds three National records. She is a Master's Weightlifting World Championships Silver Medalist in 2016. Juli is also a Masters Highland Games World Champion and holds three World Records in the Braemar Stone; Heavy Weight for Distance, and Light Weight for Distance in the 45-49 class. Her 5 years of training and coaching under Mark Rippetoe has honed her coaching skills to be a top choice for you to reach your strength and conditioning goals. Juli will strongly encourage tosabarbell athletes to compete (and prepare you to do so.) However; tosabarbell is also for those who just wish to be stronger and go through life feeling better. Matt WanAt is a retired Professional Strongman who competed frequently with Strongman Champions League in Europe. He played a year of D1 football with Iowa before concentrating on his Chemical Engineering degree in Iowa City. He is a native of Wauwatosa and still remains a staunch supporter of Tosa East. This blog will be a mixture of strength notes, coaching and nutrition tips, personal shit; bacon delicacies, and a whole lot of fun.
View all posts by tosabarbell →
This entry was posted in Uncategorized and tagged Deep fried cheese curds, Good men, Grandpa, Lake Pokegama, Lakefront Brewery Inc, Sexual abuse, Sexual Assault, Strong, tosabarbell. Bookmark the permalink.