I have noticed these last few weeks “in these, uncertain times” that there are two major camps. Camp one residents believe with all their hearts that anything and everything must be done to stop the spread of this thing. Economics be damned, we’ll deal with that later. This is the best course of action and if you don’t agree it means you don’t care about the lives of your neighbors and loved ones.

Camp two is the opposite end of the spectrum. Liberty over death (I’ve heard that somewhere else, can’t remember where but it seems like a thing.) Those that have been distressed since early March when there were rumblings that America would cease to exist not only how we expect, but how our country was framed to exist. Those that enter stores that continue today to put in more and more restrictions on how to shop for your donuts and cereal and just shake their heads. That’s me. I’m in camp 2.

Now, Matt (along with most likely the majority of Americans) walk somewhere in between. No, arbitrarily shutting down some businesses and church isn’t really good but protecting the health of Americans is. This population has the ability to work among both camps and coexist. I admire this ability. I don’t posses the personality traits to walk with this group.   I wish I did.

Back to our camps. The emotional toll current America is taking on both camps is substantial. It’s not pretty. The fighting on social media is at an all time high. If you don’t social distance you’re an idiot who doesn’t care if people die. If you call people idiots who aren’t social distancing you’re an idiot sheep who doesn’t understand that this virus has most likely been in America for six months and all of this hysterically caused economic depression is utter and complete bullshit (how’s that for a fuckin’ sentence?) Finger pointing is at an all time high; however; I believe incorrectly. See, we need to be kind and gentle “in these, uncertain times.” Me? Nope.

See, there are millions of Americans who are afraid. I understand this and even have a compassion for them that my coexisting husband does not. I check in on what America is being told. If you test positive for the virus you have a chance of dying. That’s a fact. I mean, here I sit in Minnesota and 50 people have died from this virus. 50 humans that make up husbands or wives; sons or daughters; aunties or uncles; grandma or grandpa. Humans. Families touched by death. Not good.

Fear is being driven into us with every news report; every update; every number shared. Fear this thing, it could kill you if your neighbor doesn’t socially isolate. Here’s the rub, I’ve seen my neighbors, if some of them haven’t already survived this virus and they catch it, they might die. Many are extremely skinny with very little muscle mass, aka, weakness. Yes, they walk around life loving how small they are because their doctor has told them small is better and watch the sodium.

Now, there are many small people who are strong. Weight classes exist. Obviously this isn’t the population being addressed here. It’s the weak and unhealthy population. Dear all of you, you should be afraid. If not from this virus then the next one. If not a virus then hypertension or obesity. You mask wearing people waddling up to the mobility carts at the grocery stores to buy your cookies and cereal and breads and pizza’s and chicky nuggies,  you should be afraid.

This was a good day. A very good day. I have been shaken by the lack of freedom even Texans have right now. I expect more from Texas.

The general population of America is fat and/or weak. Healthcare is an absolute mess because the markers given for health are complete bullshit. There are morbidly obese dietitians who have had eating disorders giving nutrition advice. That’s harsh isn’t it? Gods Jules, why do you have to be so harsh?

BECAUSE YOU FUCKING FAT AND WEAK FUCKS WHO REFUSE TO GET STRONG AND HEALTHY ARE THE REASON WHY A VIRUS IS A BIG DEAL.

See, MY liberties are stolen because YOU refuse to get healthy. You can still buy liquor and shit food and get your abortions (in most states, some have started to fight back) but those whose mental health relies solely on getting to the gym cannot. Whose fucked up in that scenario?

The demolition of many to save a few seems very America. Really?

Protecting the weak is admirable. The elderly; diseased therefore immune suppressed; those through no fault of their own just got a bum deal like Type 1 depend on the strong in tough times to help them. We can do that. 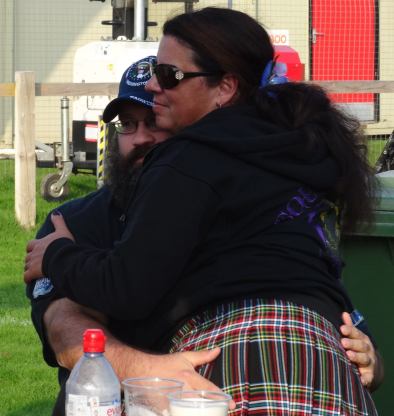 This is one of my all time favorite pictures of me and the hubs even though it looks like I’m so wide that his hands can’t reach around all of me. We were in Scotland with friends and throwing and scotch and beer and haggis and life was so very good in that moment.

I do not believe getting this virus is the kiss of death. I do not believe this because the numbers have shown it to be true. I DO believe that fear is real and it is causing people to do many things differently except one, get healthy. Afraid? Good. Now do something in your life about it. If you don’t want to, then don’t. But I’ll be damned if I have to give up my liberties because you can’t put down the Oreo’s.

Those who would give up essential liberty, to purchase a little temporary safety, deserve neither liberty nor safety.

For training opportunities at tosabarbell, call or text Juli at 320-296-9313. jep6095@gmail.com tosabarbell is a private, home grown gym with three lifting platforms; squat rack; prowlers; throwing implements; bars, bumpers and everything else needed for an effective strength and conditioning program. Straightforward barbell programming including the Olympic lifts; sound (read: not fancy bullshit) diet advance for weight gain or loss; and strong coaching will ensure you will meet your goals such as becoming stronger, more explosive, and better conditioned. Juli has been coaching teams and athletes for over 20 years. She grew up participating in various sports at various levels but was always drawn to those that require strength training. She is a 2-time Master's Amercian Weightlifting Champion and holds six Master's American records. She is a Master's Weightlifting National Champion and holds three National records. She is a Master's Weightlifting World Championships Silver Medalist in 2016. Juli is also a Masters Highland Games World Champion and holds three World Records in the Braemar Stone; Heavy Weight for Distance, and Light Weight for Distance in the 45-49 class. Her 5 years of training and coaching under Mark Rippetoe has honed her coaching skills to be a top choice for you to reach your strength and conditioning goals. Juli will strongly encourage tosabarbell athletes to compete (and prepare you to do so.) However; tosabarbell is also for those who just wish to be stronger and go through life feeling better. Matt WanAt is a retired Professional Strongman who competed frequently with Strongman Champions League in Europe. He played a year of D1 football with Iowa before concentrating on his Chemical Engineering degree in Iowa City. He is a native of Wauwatosa and still remains a staunch supporter of Tosa East. This blog will be a mixture of strength notes, coaching and nutrition tips, personal shit; bacon delicacies, and a whole lot of fun.
View all posts by tosabarbell →
This entry was posted in Uncategorized and tagged America, Barbell, Bullshit, Fitness, gyms, health, Liberty, tyranny, virus. Bookmark the permalink.