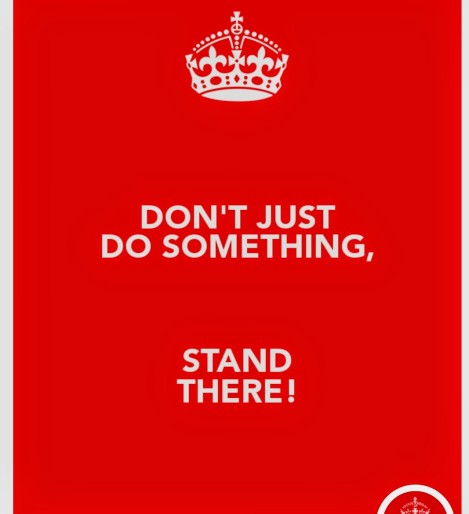 Each spring of my childhood, we would pack up the White Guzz (the big white station wagon) for the first trip to our cabin up north. It was a massive ordeal. The cabin had been closed all winter and we had no idea if we would have a working well; if the roof had caved in, or what we would find when we drove down that wooded driveway.

As children in the Peterson house, if you can walk, you can help. The main routine is that mom prepared supplies, we’d carry piles out to the car while Pastor John packed up the car like expert level in Tetris. It was something to behold. For years I would stand in awe as he was able to pack up an entire lawn’s worth of crap into a station wagon that still had to fit five humans and one Chinese Pug. Now, the pug usually went down by my mom’s feet and my sister usually went on my mom’s lap. Jerry and I would squeeze in where we could for the four hour ride north. Sounds awesome doesn’t it?

One phrase I heard often in these stressful pack ups was, “Don’t just stand there, do something!” Since I was 9, I had no idea what to do but I did know that it was bad if I got caught standing around. I could literally be moving boxes and bags in circles and that was fine but my gawds, you better not get caught standing still.

The happy news for my husband is that I’ve adopted some of Pastor John’s Tetris skills and I can pack the shit out of a car. Now, my beloved did not grow up having to pack a car for the annual trip up north so he has no idea how to pack a car. He’s better but when we were first starting out and we’d pack the Tahoe for a Games weekend he would just throw shit in and then come and tell me when the car was full and we can’t bring anything else. By the way, the car is never full. That’s the first rule of packing the car. (When we were in Iceland a few years ago we had to pack up after our first night and move to our next Air BNB but first pick up our pal, Max, and fit him into the car. Oz came upstairs our hostel and told me there’s no way we have room for Max. Of course, being me, I said that’s not how this will work. I went down and instructed the boys to pull everything out of the car and I packed that shit up so tight that not only were we able to fit Max in the car, I even had half a seat to sit on. I should have received a gold medal for that. Pastor John would have been proud.)

Now, often times, when I’m packing up Matt will hang back. Again, he didn’t grow up having to do this and that’s fine. But it does tend to grate on my nerves when I’m flying around and he’s sitting at the dining room table or even worse, trying to help and fucking up my Tetris packing. Sounds fun for him, eh? Do you think we even know how many times we box our spouses into a corner and just leave them there to flounder? Ya, I don’t want to think about it either. So for today, we won’t.

It may appear as if doing something is more important that doing nothing, but it actually rarely is. Most times we need a plan. Now, that plan may take 20 minutes to make or it may take 20 seconds. You’ve done that, right? You’re flying down the highway and suddenly see that traffic is at an absolute standstill ahead and you’ve got 3 seconds to the next exit. You have to decide if you should get off or stay on. Either choice can bring on a huge delay to your travel or be the right call. You don’t know. So you choose and you allow yourself to deal with that choice. An avoidance to a traffic delay is most likely not a life or death situation, unless you’re in an ambulance. I got caught in traffic once on a highway and had to TT. It was precarious. I learned to pack a solo cup wherever I go for these dire situations. It wasn’t life or death, but it was damned uncomfortable.

American politicians and policy makers took their boxes and bags and circled around the White Guzz’s of America and did something based on their perception that they had 3 seconds to get off the freeway or get caught in a Walking Dead Atlanta scene where millions of Americans would be littered among the highway if they didn’t just DO SOMETHING.

It doesn’t matter if we treat an entire country like another country. It didn’t matter if we treat an entire country like one big city. WE HAVE TO DO SOMETHING! Once one Governor did something the next Governor had to do the same thing and it spread from coast to coast. But we can’t stop there because if Wisconsin does the same thing that Minnesota does, it doesn’t appear as if we’re doing enough. So we’ll do more to “protect.” The Governor of Michigan can’t possibly be beat by the weasel Governor of Wisconsin so she’ll do MORE. Everyone had to do MORE or people will die!

Now, there WERE Juli’s of the world saying, “NO. Wait. Unpack the car and we’ll take 10 minutes to repack and everything will be fine.” We were perceived as wanting people to die. Because that’s the choice. Either do something drastic and severe or people will die. You heartless bitch, you just want people to die.

No. I just wanted people to stop and come up with a plan that makes sense FOR THEM. Should Milwaukee and Dallas have the same plan? We don’t know. Let’s take a minute and look at the data we have in that moment. And in another week let’s look again. Instead, we pointed to New York City (who never shut down their mass transit system) and said, ‘well by gods, we can’t be another NYC. Not on my watch.’

There is an “at all costs” mentality that has murdered the American dream for hundreds of thousands of people. The ‘3 seconds to the exit’ action plan that has placed over 30 million people out of work.

But we’re not done. Now, it has trickled down to municipalities and retail. One store is mandating one way aisles in California so we better do that here in suburban Milwaukee. Of course the glaring issue with that is that if enforced (I don’t play that game unsurprisingly) it causes patrons to increase their time in each store while they continue walking up and down aisles they didn’t need to be in. Fucking duh.

Businesses are requiring everyone to wear masks. Now, this is going to hurt someone’s feelings but the argument on mask wearing changes depending on who you’re talking to. There is not a sweeping belief by medical professionals that wearing a mask is effective or even safe BUT BY GODS IT LOOKS AS IF WE’RE DOING SOMETHING SO PUT ON YOUR FUCKING MASK AND SHUT THE FUCK UP. DO YOU WANT PEOPLE TO DIE BECAUSE OF YOU? Don’t just stand there, do something.

I have observed these last few weeks as different cities are relaxing their anti-American house arrests of healthy citizens that the overall stories in the media is that it is causing mass confusion. No, that is wrong. Forcing an economic depression and the gang rape of the U.S. Constitution back in March caused confusion. We’re just dealing with it now. In the strength world, think of a world record snatch attempt. With the heaviest weight possible, if shit goes wrong off the floor, it’s not likely to improve in the next .8 seconds. It’s going to be nearly impossible if not (I believe) impossible to fix the lift. If you did, it’s not your max weight. Alternately, a strong and mechanically perfect first pull MAY get your that lift overhead. It probably won’t if you throw it out front at some point but you at least have a chance.

A grip’it and rip’it approach to a world record snatch will take you only so far. That’s what we’ve done here and if you speak out against it YOU JUST WANT PEOPLE TO DIE. No, I don’t. I want us to just fucking stop and think about the best way of going through this for our locality. I rely on our policy makers to look ahead at that traffic jam and say, there’s an exit 5 miles up. We’re going to stay on this road right now and if we have to get off ahead we’ll do that because I know there’s a road that will take us around the city.

Don’t just do something, stand there.

“I prefer peace. But if trouble must come, let it come in my time so that my children may live in peace.”

For training opportunities at tosabarbell, call or text Juli at 320-296-9313. e-mail to jep6095@gmail.com At tosabarbell, I build relationships cultivated in a strength and learning environment. There is no 12 week magic pill program to strength but rather a lifetime commitment to be the very best and most useful human you can be. tosabarbell is a private, home grown gym with three lifting platforms; squat rack; prowlers; throwing implements; bars, bumpers and everything else needed for an effective strength and conditioning program. Straightforward barbell programming including the Olympic lifts; sound (read: not fancy bullshit) diet advance for weight gain or loss; and strong coaching will ensure you will meet your goals such as becoming stronger, more explosive, and better conditioned. I have been coaching teams and athletes for over 30 years. I grew up participating in various sports at various levels but was always drawn to those that require strength training. I have multiple local, national, and world records in the sports of Weightlifting and Highland Games Heavy Events as well as a combined total of 5 World Championships. My 5 years of training and coaching under Mark Rippetoe provided a wide range of influence from some of the top strength & conditioning and throwing coaches in the country. I will strongly encourage tosabarbell athletes to compete (and prepare you to do so.) However, tosabarbell is also for those who wish to be stronger and go through life feeling better. Matt WanAt is a retired Professional Strongman who competed frequently with Strongman Champions League in Europe. He played a year of D1 football with Iowa before concentrating on his Chemical Engineering degree in Iowa City. He is a native of Wauwatosa and still remains a staunch supporter of Tosa East. This blog will be a mixture of strength notes, coaching and nutrition tips, personal shit; bacon delicacies, and a whole lot of fun.
View all posts by tosabarbell →
This entry was posted in Uncategorized and tagged America, Coronavirus, Dan O'donnel, Freedom, Grip it and Rip It, Highland Games, Mark Belling, Snatch, weightlifting, WISN. Bookmark the permalink.