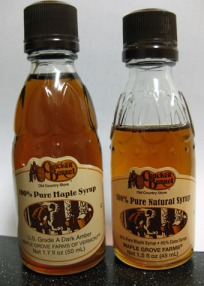 On New  Year’s weekend, we had dinner with friends who sent us home with a bag of Chocolate bars. After begging and pleading not to, and threatening to dump them in the garbage immediately, we did the only logical thing we could. We ate them. And I started the year with sugar bloat. No fun.

I felt like hell. Lethargic, puffy, ucky. And I decided I didn’t want to feel like that again. Now, if I would have been smart and had a half of a bar and left the rest for the boys, that would have been fine. But that’s not how me and sugar roll, especially chocolate bars I never get to have. Self control? Nope. Sorry (not really.)

So I did a complete 180 and since then have followed a very basic bodybuilder style diet. I’m not going to get into details on it, google BB diet and you’ll find enough info. The only point of stating this is that my food right now is as controlled as it could be and absolutely no sugar…to a point. I enjoy a piece of dark chocolate here and there but I didn’t for the first couple of weeks.

Enter the syrup lesson. We met one of my pilots at Cracker Barrel in Wichita Falls for breakfast during our visit. I really wanted a pancake which would pretty much be my first carb since January 2nd. And I wanted syrup. A whole Cracker Barrel bottle (which really isn’t that big for a syrup-holic.) So I did and wasn’t going to feel bad about it at all. Until I did.

Promptly after eating and saying goodbye, the sugar hit. Hard. By the time we got back to the hotel I was a mess. Almost sleep walking and felt like complete doo doo. I crawled back in bed and literally passed out for an hour. The only thing that got me up is that I had an appointment at 11:00 I had to get to. The entire time I was with a friend of mine, I felt like I had been drugged.  It took until mid afternoon and three Shrimp taco’s (without the shell) with lots of water to even feel partially normal.

Lesson learned. No more syrup, or anything else I love with such a concentrated sugar content. Because I don’t want to feel like that again. Ever. I wasted over half a day of precious vacation time with my Bigg guy and friends I don’t get to see very often feeling like crap just because I wanted a pancake and syrup.

Enter Facebook with pictures of another one of my favorites, Cranky Al’s donuts.

I love these things. They are magic. They disappear in a heartbeat and I could literally eat a handful without even thinking about it (remember the lack of control thing?) But then I remember the syrup lesson, and I know that even one of these things will put me down for at least a couple of hours. No Merci.

And then I think about this little factoid, for years and years that sugar/carb feeling was very normal. I literally put myself into a situation of feeling like crap on a constant basis and considered it normal. MyBad.

All that said, I will be completely honest in admitting that the bacon/pineapple pizza that Bigg ordered at 10pm the other night was absolutely delicious. Do I feel bad about the three (or four, I was eating, not counting) pieces I ate at 10:30 at night? Nope. I’ve earned those carbs and without the sugar and lots of water, I felt just fine.

And I’m right back on track today. But I think I’ll wait until Friday to jump back on the scale. Heh.

Just a spoon full of sugar helps the medicine go down.

For training opportunities at tosabarbell, call or text Juli at 320-296-9313. jep6095@gmail.com tosabarbell is a private, home grown gym with three lifting platforms; squat rack; prowlers; throwing implements; bars, bumpers and everything else needed for an effective strength and conditioning program. Straightforward barbell programming including the Olympic lifts; sound (read: not fancy bullshit) diet advance for weight gain or loss; and strong coaching will ensure you will meet your goals such as becoming stronger, more explosive, and better conditioned. Juli has been coaching teams and athletes for over 20 years. She grew up participating in various sports at various levels but was always drawn to those that require strength training. She is a 2-time Master's Amercian Weightlifting Champion and holds six Master's American records. She is a Master's Weightlifting National Champion and holds three National records. She is a Master's Weightlifting World Championships Silver Medalist in 2016. Juli is also a Masters Highland Games World Champion and holds three World Records in the Braemar Stone; Heavy Weight for Distance, and Light Weight for Distance in the 45-49 class. Her 5 years of training and coaching under Mark Rippetoe has honed her coaching skills to be a top choice for you to reach your strength and conditioning goals. Juli will strongly encourage tosabarbell athletes to compete (and prepare you to do so.) However; tosabarbell is also for those who just wish to be stronger and go through life feeling better. Matt WanAt is a retired Professional Strongman who competed frequently with Strongman Champions League in Europe. He played a year of D1 football with Iowa before concentrating on his Chemical Engineering degree in Iowa City. He is a native of Wauwatosa and still remains a staunch supporter of Tosa East. This blog will be a mixture of strength notes, coaching and nutrition tips, personal shit; bacon delicacies, and a whole lot of fun.
View all posts by tosabarbell →
This entry was posted in Uncategorized and tagged Bodybuilding diet, strength training, sugar consumption. Bookmark the permalink.