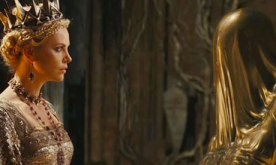 I have to admit, Snow White was a fairy tale that disturbed me. So let me get this straight, first off, some stupid man brought in a wicked queen just cuz she was hawt and he was lonely? And then this Queen was so completely obsessed with her looks that she let a mirror talk her into killing her step daughter? SRSLY? Just cuz she was prettier? That’s crazy pants.

Fast forward to now. I drove the Oz man to his summer destination resort of Bloomington, Mn. He’ll take a week to play with his Texas family and spend some quality time with his Pa. He’ll have a good summer. My daughter was a big girl and drove all the way to the cities by herself, it was a big day. Heh. Truth be told, she still gets a little nervous but is doing better managing the Minneapolis highways…and drivers. We missed the other half of the Z’s but he was busy being a grown up and working all weekend. Being a grown up sucks sometimes.

As we were eating dinner, I looked at my daughter. See, my daughter is beautiful. Really, the most beautiful. She has flawless ivory skin, red hair that glows like fired burgundy in the sunlight, and (thankfully) was NOT built like her mama so she is more lanky and athletic rather than short and curvy.

She is all girly girl, with her Mama’s attitude, (sorry about that Za) and a penchant to play with the boys…

My moment came when I realized that her beauty was no longer mine. That as much as I want it to be so, I no longer have her beautiful skin. I no longer glow like she does, I no longer have her energy, her youthful spirit. As much as I love being as strong as I can in my middle age, I no longer have her youthful potential. It was a moment. And I felt old. Oh, not to worry now, I’m fine. But I did drink a big cup of chilled reality. I also freely admit that as Za’s Ma, I’m completely biased even though it is true that she’s most beautiful. (She also keeps her fishing pole in the front seat of her car in the event that she finds herself with a free half hour…she will find a place to fish. She’s also most cool.)

I’m not afraid of aging. I come from two biological parents who never got the chance to age; I’ve known children who didn’t get a chance to age; I’ll take aging. That I have a chance to do it while still being as strong as I can and playing competitor at times with healthy children and a man who is the best of the best is a bonus. I’ll take it. But I said good bye to a piece of my imagined youth that I’d been carrying for a while this weekend. Gulp.

There is a fountain of youth; it is your mind, your talents, the creativity you bring to your life and the lives of people you love. When you learn to tap this source, you will truly have defeated age.

For training opportunities at tosabarbell, call or text Juli at 320-296-9313. jep6095@gmail.com tosabarbell is a private, home grown gym with three lifting platforms; squat rack; prowlers; throwing implements; bars, bumpers and everything else needed for an effective strength and conditioning program. Straightforward barbell programming including the Olympic lifts; sound (read: not fancy bullshit) diet advance for weight gain or loss; and strong coaching will ensure you will meet your goals such as becoming stronger, more explosive, and better conditioned. Juli has been coaching teams and athletes for over 20 years. She grew up participating in various sports at various levels but was always drawn to those that require strength training. She is a 2-time Master's Amercian Weightlifting Champion and holds six Master's American records. She is a Master's Weightlifting National Champion and holds three National records. She is a Master's Weightlifting World Championships Silver Medalist in 2016. Juli is also a Masters Highland Games World Champion and holds three World Records in the Braemar Stone; Heavy Weight for Distance, and Light Weight for Distance in the 45-49 class. Her 5 years of training and coaching under Mark Rippetoe has honed her coaching skills to be a top choice for you to reach your strength and conditioning goals. Juli will strongly encourage tosabarbell athletes to compete (and prepare you to do so.) However; tosabarbell is also for those who just wish to be stronger and go through life feeling better. Matt WanAt is a retired Professional Strongman who competed frequently with Strongman Champions League in Europe. He played a year of D1 football with Iowa before concentrating on his Chemical Engineering degree in Iowa City. He is a native of Wauwatosa and still remains a staunch supporter of Tosa East. This blog will be a mixture of strength notes, coaching and nutrition tips, personal shit; bacon delicacies, and a whole lot of fun.
View all posts by tosabarbell →
This entry was posted in Uncategorized and tagged Aging, daughters, snow white, strength while aging. Bookmark the permalink.