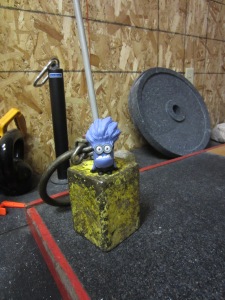 I walked myself right into a pickle last week on the interwebz. Oh sure, I had good intentions of just stating my opinion and then stepping away like I try to do (TRY being a key word here) on a regular basis. But, as interwebz discussions tend to do, this conversation took a turn into angry that sucker punched me square in the chin.

Now, one of the hardest things about being a rookie at 46 is that talks that happen and seem simple to an outsider have some history and feelings that can ramp up a discussion pretty easy. In this case, it was whether or not the Master’s class women (40+ years and up) should throw the Heavy Weight for Distance (and for height)  at the World Games next year or take it down to a 21# implement. There was a seemingly decent conversation on the NASGA boards about it in which folks calmly (me included) gave their opinions and moved on.

What we didn’t see there were other conversations where it sounds like opinions weren’t so calm or at least had our AD hopping enough to try to come up with a pleasing solution. When it was decided that women 40-44 would throw the heavy (28#) and women 45-49 would throw the lighter heavy (21#), I immediately started looking for a source to mock me up a birth certificate to put me in that younger class.

Why? Why don’t I just shut my pie hole and accept throwing the lighter? I dunno. I guess because I’m “young” enough in this sport to be “stubborn” enough to want to throw the heavy. I have made my opinion painfully clear (and if not, you just didn’t pay attention) on this thread, but at the end of the day, I just want to throw the heavy on the world stage. I may bomb out; it may throw me in last place; I most likely won’t come remotely close to throwing it further than the current record, who knows. All I know is that I worked very hard last winter to increase my upper body strength and size and will do the same this winter to be able to have a chance to throw that heavy as far as I can.

So instead of going immediately to the illegal fake birth cert route, I decided to ask our AD if I can throw with the younger group. His response was pretty endearing…”Aaaaahhh, … mmm … aaahhh … yes. Not sure why not.” See, endearing. Problem solved. Yup, I’d be throwing with the young ladies. Yup, there are already a few that will kick my arse overall and those are only the ones I know of. There’s a whole crew in Europe that are sure to be at the top of THEIR game too. But if I can throw the heavy, then I should throw the heavy. That’s just how I roll. Although I did ask if this were an age issue or a strength issue, I attempted to pose the question with respect and it seems it was received as such. Thanks ladies.

But there was a small faction who didn’t appreciate my wanting to throw with the younger group and took to a few places on the interwebz to say so. Direct hit, well done. Now, I’ve gone back and forth about writing on this. It is not my intention to highlight the ugliness of athletics, but I keep shit real here and this was real to me. At least for a few hours until I just went to bed and got over it. But folks coming at me from the world wide when I had built a sort of field relationship with them hurt my heart.

Here’s why. Cuz I work hard to be a positive presence on the field. I am competitive enough to be a brat when I don’t do well and I’ve learned to just smile after a bad throw and move on to the next. I’ve been lucky enough to receive quick instruction from some of the best throwers around the globe and I strive to be thankful (which I are) and respectful to those around me. It wouldn’t occur to me to toss that aside and choose an internet fight when it is most assured that we’ll meet again on the field. But that’s sport. It happens. What I can do is just move on, which I did the next day. I received some hugely positive feedback from some greats in this sport and to all of you, it meant the world. Thank you.

And to those who don’t want me on your playground, I’m sorry you feel that way. I really am. This sport, all sports really, are bigger than us. We’re just visitors, let’s play nice. If you have a beef with me, I’ll listen. But not through negative web attacks. Negative energy thrown my way comes back to the tosser, cuz I don’t accept it. No, no, no…not today. Not any day.

At the end of this day, I keep in mind that this Games is over 13 months away. I have three events coming up in the next three weeks. Bigger fish to fry. First day of School for the kids; first football game for Oz; World Log Lift Championships for Bigg. Lots to do. And I’ll keep throwing the Heavy. Cuz that’s how I roll.