Empower vs. Encourage (aka Use Your Words III) 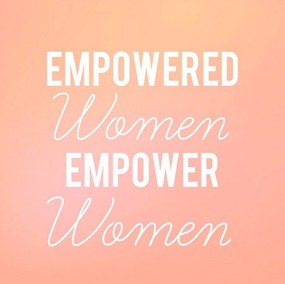 What a wonderful, empowered age we live in as women! We can vote; buy our own cars; have babies without those pesky, pain in the ass men; we can fight against sexual harassment when it doesn’t interfere in getting a movie role; hell, we can even bring home the bacon and fry it up in a pan! What we can’t seem to do (yet), is get a handle on the ENGLISH FUCKING LANGUAGE!

We are told to EMPOWER!!!! other women (only women. Don’t empower men, fuck them.) In fact, we aren’t just told, it is demanded! As a woman, you MUST empower women (yes, there’s a lot of yelling in this post. Just turn down your sound)! Of course the glaring problem of being bullied into this hashtag is the obvious; I DON’T HOLD ANY POWER OVER YOU IN THE FIRST FUCKING PLACE TO GIVE YOU!

JHMFC! Leave it to the hashtag generation to fuck up a perfectly fine word that used to mean something. To empower someone is to:

give (someone) the authority or power to do something…OR…

make (someone) stronger and more confident, especially in controlling their life and claiming their rights 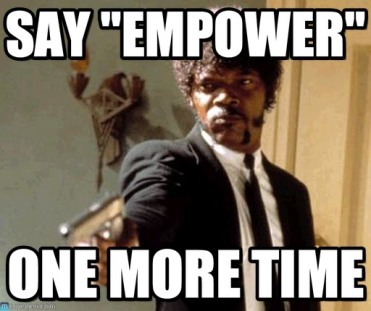 I’ve actually seen in social media where women I know and have behaved in a High School Mean Girl clique sort of way that women must empower each other. Lulz, hypocrite. Hell, even the hubs has seen this shit at Highland Games and he’s a dude who doesn’t even see a piece of garbage that can sit on the floor in front of him for 6 months.

Now, I will admit that the second description of the “E” word is kinda warm and fuzzy. All, “heyyyyyy, here’s something I can do for you.” But no, because to “MAKE” someone else “FEEL” anything (whether it’s positive or negative) implies you have “POWER” over them. Uh hellz no. It took over 40 years for me to stand in my own power, the hell I’ll give that up for any one. Ever.

So what do I do? I’m so confused. I don’t have power over anyone to give (well, okay, I have about 13 more days to empower the Oz man who gets to celebrate his 18th birthday by taking the A.C.T.s. Lucky kid, errrr, I mean young man.) Because as a parent it IS our job to empower our children. My children are fortunate (I hope they see it that way) to have their old mum for 25 and 18 years of their lives. Hopefully they’ll have me for many more. However, one thing I never expect to hear from any of them is, “I wouldn’t make it without you.” See, that would mean that I’d failed to empower them as children when I DID hold some power over them. If I haven’t raised them to make it without me, well, what good was I? No, I am not my children’s best friend. Gawds, do you even THINK I want to know their secrets? Not even a little bit.

I have been in work situations where I am in a position to empower someone. That is a very large responsibility that includes teaching and encouraging and problem solving and a whole bunch of other, hands on actions that are necessary to empower someone. But wait a minute, let’s get back to that other ‘E’ word up there, encourage.

Ohhhhhhh, I can do THAT! To encourage is to “give support, confidence, or hope to (someone).” Well shit! EZPZ. This is useful. This I can do every day, all day (unless you do something that shouldn’t be encouraged, like ignore a piece of garbage that’s been sitting in front of you for 6 months…as an example.) In all seriousness, this is a must. Encouragement, or lack thereof, can form who we are or how we walk through life without even noticing. As non-Disney as my childhood was, when it came to athletics, I was encouraged. It was something I took to, no matter the sport (I was the one who bowed out of soccer early. So let me get this straight-we run from one end of a ginormous field to the other chasing people chasing a ball and I never get to trip or push someone? Nope, I’m outtie.) It’s probably best that we didn’t have Rugby where I grew up, we couldn’t afford the E.R. bills. I wasn’t pushed, I was encouraged. If you want to do this, do it well and we’ll do what we can afford to put you in a good position to succeed. That is something I’ll always be thankful for.

One of the best ways to have a happy relationship? Encourage. Whether it’s a spouse; child; friend; co-worker/client, encourage. I don’t empower Matt, that would imply that I hold power over him and would be incredibly unhealthy. He doesn’t empower me, he encourages me. Constantly. He doesn’t tell me what I can’t do, in fact, sometimes (if this hits at the wrong time;) I get a little frustrated with how flip he can say, “You’ll figure it out baby. Do we have any tortillas?” He’s not being glib, he just knows more than me in that moment that I’ll figure it out. It’s comforting…later. Heehee.

I’ve worked for people who encouraged me to not only be better at my job, but better at life. I’ve also worked for crazy people who loved to publicly embarrass and shame me. Guess which one I liked better and still have some relationships with. To be fair, boss’ can empower. In fact, it’s part of their job. Teachers can be empowering, it’s part of their job. 9 months out of the year anyway. Teammates at a Saturday lifting session? Encouraging. A coach? Encouraging. Because while I will listen and try to do exactly what a coach tells me to out of respect for them and a desire to get better at said movement, I will not give a coach/boss/teacher power over me. In fact, if a situation gets to be discouraging, I’m out. I’ve had this before. It sucks. Where a coach will continue to praise everyone around you but when you, oh I dunno, win a World Championship they say, ‘congrats on your first place finish.’ I mean, I don’t need a stroke job but maybe identifying something I’d worked for years to accomplish means a bit more than just another first place. 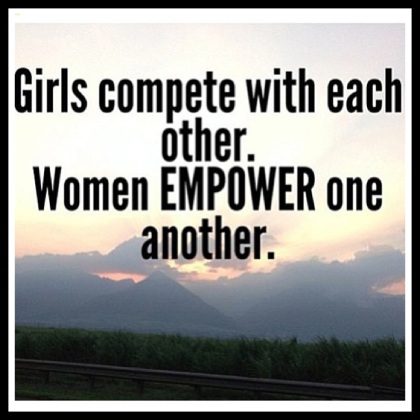 False. Females of all ages can compete with each other and remain not only friendly, but downright encouraging. Just listen to the back room of a meet or the sidelines of a Highland Games. Encouraging each other is as easy as breathing.

The most important lesson in all this, as I see it, is that we get to choose what we encourage. Stop with the hashtag bullying telling someone what they have to do or else they’re not a good person. And probably live your words, that’s a pretty good way to garner respect. Because when you preach on social media how others should live and then walk a completely different path, well, it’s no bueno. (I just started sentences with “And” and “Because”, I’m a literary rebel.) But at least, if you’re going to bullymeme, USE YOUR FUCKING WORDS. You can’t empower me, you have no power. The actual word implies that you do. Fucking duh. I encourage you not to be an idiot. How’s that for encouraging? 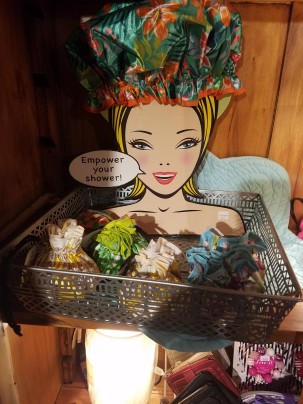 You know a word has jumped the shark when you see something like this:)

I was walking around looking for somebody, and then suddenly I wasn’t anymore.

For training opportunities at tosabarbell, call or text Juli at 320-296-9313. e-mail to jep6095@gmail.com At tosabarbell, I build relationships cultivated in a strength and learning environment. There is no 12 week magic pill program to strength but rather a lifetime commitment to be the very best and most useful human you can be. tosabarbell is a private, home grown gym with three lifting platforms; squat rack; prowlers; throwing implements; bars, bumpers and everything else needed for an effective strength and conditioning program. Straightforward barbell programming including the Olympic lifts; sound (read: not fancy bullshit) diet advance for weight gain or loss; and strong coaching will ensure you will meet your goals such as becoming stronger, more explosive, and better conditioned. I have been coaching teams and athletes for over 30 years. I grew up participating in various sports at various levels but was always drawn to those that require strength training. I have multiple local, national, and world records in the sports of Weightlifting and Highland Games Heavy Events as well as a combined total of 5 World Championships. My 5 years of training and coaching under Mark Rippetoe provided a wide range of influence from some of the top strength & conditioning and throwing coaches in the country. I will strongly encourage tosabarbell athletes to compete (and prepare you to do so.) However, tosabarbell is also for those who wish to be stronger and go through life feeling better. Matt WanAt is a retired Professional Strongman who competed frequently with Strongman Champions League in Europe. He played a year of D1 football with Iowa before concentrating on his Chemical Engineering degree in Iowa City. He is a native of Wauwatosa and still remains a staunch supporter of Tosa East. This blog will be a mixture of strength notes, coaching and nutrition tips, personal shit; bacon delicacies, and a whole lot of fun.
View all posts by tosabarbell →
This entry was posted in Uncategorized and tagged Competition, Competitor, Empower, Encourage, Highland Games, Masters athletes, Use Your Words. Bookmark the permalink.

1 Response to Empower vs. Encourage (aka Use Your Words III)