It was a whirlwind weekend for tosabarbell. Bigg flew in late in the afternoon on Friday from his first new job work trip. HIS whirlwind week in Sweden and Finland was very successful from a prize point of view (the work stuff was fine too;) The variety pack of Akvavit needed to be addressed and we had quite the tasting session Friday night. Some was fruity, some bold, some had hints of elderberries and anise seed. It was all very tasty but we quickly learned that not ALL Akvavit was smooth as glass. Uff Da!

Saturday morning we watched Oz’s football team go 0-2 and was entertained, as always, by sports moms and dads who seem to equate 7th grade football to a State high school championship. Simmer down folks, they’ll get it.  When the new stadium was built, Matt’s family made a donation and were awarded people’s butts right near the 50 yard line.  Heh.

Then off to Chicago and The Purple Pig. Matt found the Purple Pig last year when we were planning on staying in town prior to the Bears/Vikes game. A sick puppy at home altered our plans and we put it off. So this year, expectations and excitement were high. We put our name on the two hour wait list and meandered across the street for a pre-pig snack. We found a very nice jazz club and grill and split a lamb sammich with some amazing guacamole and corn dip. Couple that with great wine and a dark and stormy for the big guy and our somewhat full tummies were prepared for the remaining hour’s wait.

Our first hint that this was going to be a fun foodie night was our waiter.

His mustache made him seem about six feet tall and 240 pounds. In reality, he was probably about 5’8″ and weighed in 155# soaking wet. But I shit you not, that mustache added stature to his frame and his knowledge of the quirky menu and food in general helped make the Pig a wonderful experience. (By the way, if you know how to use the Iphone camera with the flash without getting this white shadow, let me know.)

We took our time to enjoy various dishes but by far, my favorite was the Roasted Bone Marrow with herbs. By god that was good. Decorum flew straight out the window while I gnawed at the bones right at the table! 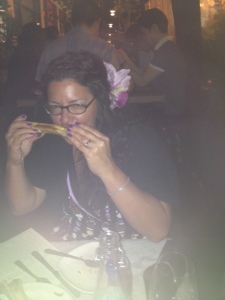 Another fun dish was the Pig’s ear with a type of kale and pickled cherry pepper relish and an over easy egg on top that gave gooey goodness when broken. It was awesome. 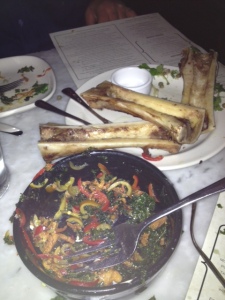 Overall it was a wonderful experience and we’re already forming our attack plan for our next return. If you have a chance to check it out, do it. The only thing we would have done differently is  grab a few road trip BK burgers to pre-game so we didn’t arrive hungry. We know better…never let your Strongman arrive hungry to a restaurant. Hungry to Hangry in 3…2…1!

As always, the Vikes/Bears game was a blast, even in the rain. Even with a comeback win by the Bears in the final moments of the game. Oh well. I don’t let it get to me…cuz I’m not playing. See? It was a great game and the shots that get passed back and forth when the Bears score actually makes the whole day a win/win for me. Our Dollar Tree, clear, ‘One size fits most’ jackets were a total success and even worked for Matt…

…and the best part of the day? When we were leaving the stadium we had to took a short walk through the tunnel when the loud, enthusiastic chant of “Green Bay Sucks!” broke out for about a minute.

Ahhhhhh…common ground. See? We CAN all get along.

When I played pro football, I never set out to hurt anyone deliberately – unless it was, you know, important, like a league game or something.

For training opportunities at tosabarbell, call or text Juli at 320-296-9313. jep6095@gmail.com tosabarbell is a private, home grown gym with three lifting platforms; squat rack; prowlers; throwing implements; bars, bumpers and everything else needed for an effective strength and conditioning program. Straightforward barbell programming including the Olympic lifts; sound (read: not fancy bullshit) diet advance for weight gain or loss; and strong coaching will ensure you will meet your goals such as becoming stronger, more explosive, and better conditioned. Juli has been coaching teams and athletes for over 20 years. She grew up participating in various sports at various levels but was always drawn to those that require strength training. She is a 2-time Master's Amercian Weightlifting Champion and holds six Master's American records. She is a Master's Weightlifting National Champion and holds three National records. She is a Master's Weightlifting World Championships Silver Medalist in 2016. Juli is also a Masters Highland Games World Champion and holds three World Records in the Braemar Stone; Heavy Weight for Distance, and Light Weight for Distance in the 45-49 class. Her 5 years of training and coaching under Mark Rippetoe has honed her coaching skills to be a top choice for you to reach your strength and conditioning goals. Juli will strongly encourage tosabarbell athletes to compete (and prepare you to do so.) However; tosabarbell is also for those who just wish to be stronger and go through life feeling better. Matt WanAt is a retired Professional Strongman who competed frequently with Strongman Champions League in Europe. He played a year of D1 football with Iowa before concentrating on his Chemical Engineering degree in Iowa City. He is a native of Wauwatosa and still remains a staunch supporter of Tosa East. This blog will be a mixture of strength notes, coaching and nutrition tips, personal shit; bacon delicacies, and a whole lot of fun.
View all posts by tosabarbell →
This entry was posted in Uncategorized and tagged Chicago, Chicago Bears, Green Bay sucks, Minnesota Vikings, The Purple Pig, tosabarbell, Wauwatosa jr. Raiders. Bookmark the permalink.