Chivalry Isn’t Dead, But it IS Pissed Off 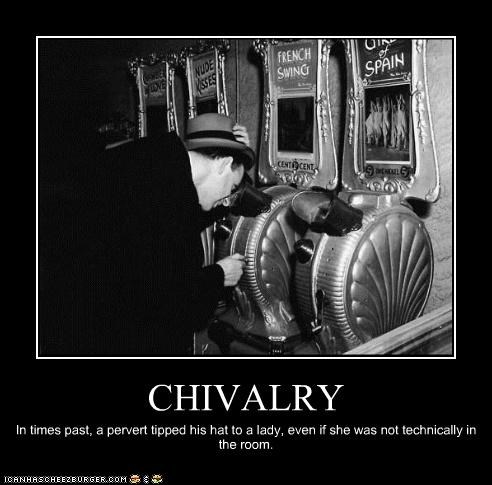 So we got into an interesting little e-chat last night. Our good friend, and Relentless lifter, Eric posted on Chivalry last night. Now I haven’t known Eric long but he does kind of fit the whole ‘Chivalrous’ ideal. He’s a big, strong guy; he’s a cop so is out there taking care of business (he and his partner gave a quick escort to a min-van with a woman in labor the other day. That sounded cool); he’s funny and seems fair and knows not to sweat the small stuff. He’s a gem.

I chimed in and said something along the lines of feminism having nothing to do with Chivalry but my opinion was that too many mothers babying their son’s was a big reason that men don’t even KNOW what Chivalry is.  He came back with the idea that those mother’s were feminists so he’s right. Right before I was told to GTFO I said this:

No. They’re not. That’s ignorant. Women babying their boys don’t want them to be aggressive so turn them into ‘yes men’ who rail against only those they thing they can, i.e. the elderly, the young, or someone they deem lesser than them. Feminism has absolutely nothing to do with it.

BOY! Never tell an angry woman hater that you disagree…especially if you’re a woman. His idea was that women who don’t want their boys to be aggressive ARE feminists. Huh? Goodness. I got called a B, a C, a B’y C, a rude ignorant F’ing C,  all in the name of Chivalry. Well, my Bigg guy didn’t like that very much. But is tactic is a bit different. He explained what Chivalry actually meant and raging on women on the internet wasn’t it bud. See, some of you don’t know this (but you probably do) but my guy is a bit of a nerd at times. So when he talks about something, it’s because he’s probably studied it in some way. So he came back with this:

Guys like you who call women cunts are little boys. True chivalry has died for most men because grown boys confuse being tough and cussing with being a man. Being a man and showing chivalry shows that you have matured past the stage where women are objects. Grow up.

Well said. But angry guy REALLY didn’t like that so continued to rail, only at Matt this time. He got pretty creative then with his insults, cool. We stepped away for a moment and came back to post after post of sewer sludge. After doing a little checking, I noticed angry guy had different pics of Relentless activities. Hmmmm, if this guy is a Relentless lifter, I’ll pass on supporting it this year thank you very much. So I asked Eric and Scott Nutter if he was? Nope, nothing to do with it. Thank goodness. Ohhhhhh, angry guy didn’t like that and came at me with renewed hate. Goodness, what’s your life like that you get completely out of control on The FB on a post that was originally about CHIVALRY??? Is that why you’re an asshole angry guy? Cuz some “feminist” gave you a beat down when you tried to open the door for her? Did she scare you in public? Make you cry?

Or are you just bitter because every female you come in contact with can spot a mile away what an ignorant angry person you are and steers clear? I dunno. He had a pic with a kid on his lap, hopefully he doesn’t have a daughter. She doesn’t stand a chance. Really. I know a dear, dear girl (now young woman) who lived with her woman hating father after her mother left and his woman hating wasn’t kept to just his ex but ALL women…of which this girl was turning into one. It was devastating to see.

Anyways. No, Chivalry isn’t dead, but it IS pissed off. I have to believe that it’s pissed that men like angry guy are speaking on it’s behalf. I have to believe that men who are not able to grow up and have a mature conversation with others, especially women, annoy Chivalry. That the Chivalrous energy in the world takes a beating at such things and has to regroup to make a resurgence. But it always does, in the form of a Bigg guy; or a Relentless organizer; or a man named Swede who lifts up ALL people, not just Westside T-shirt wearing dudes in the gym. It’s out there, but it takes a beating every day. To which do YOU contribute?

When a man gives his opinion, he’s a man. When a woman gives her opinion, she’s a bitch

For training opportunities at tosabarbell, call or text Juli at 320-296-9313. e-mail to jep6095@gmail.com At tosabarbell, I build relationships cultivated in a strength and learning environment. There is no 12 week magic pill program to strength but rather a lifetime commitment to be the very best and most useful human you can be. tosabarbell is a private, home grown gym with three lifting platforms; squat rack; prowlers; throwing implements; bars, bumpers and everything else needed for an effective strength and conditioning program. Straightforward barbell programming including the Olympic lifts; sound (read: not fancy bullshit) diet advance for weight gain or loss; and strong coaching will ensure you will meet your goals such as becoming stronger, more explosive, and better conditioned. I have been coaching teams and athletes for over 30 years. I grew up participating in various sports at various levels but was always drawn to those that require strength training. I have multiple local, national, and world records in the sports of Weightlifting and Highland Games Heavy Events as well as a combined total of 5 World Championships. My 5 years of training and coaching under Mark Rippetoe provided a wide range of influence from some of the top strength & conditioning and throwing coaches in the country. I will strongly encourage tosabarbell athletes to compete (and prepare you to do so.) However, tosabarbell is also for those who wish to be stronger and go through life feeling better. Matt WanAt is a retired Professional Strongman who competed frequently with Strongman Champions League in Europe. He played a year of D1 football with Iowa before concentrating on his Chemical Engineering degree in Iowa City. He is a native of Wauwatosa and still remains a staunch supporter of Tosa East. This blog will be a mixture of strength notes, coaching and nutrition tips, personal shit; bacon delicacies, and a whole lot of fun.
View all posts by tosabarbell →
This entry was posted in Uncategorized and tagged Angry guy, Chivalry, Gloria Steinem, Relentless, tosabarbell. Bookmark the permalink.