I am so tired of the glib phrase, ‘Training with weights won’t make you bulky ladies, but cupcakes will.’  At least not in the way we believe women are picturing. Of course our assumption is that silly women who believe that picking up a barbell will Evil Minion morph them into this… 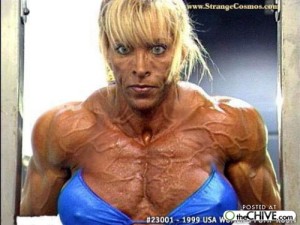 Like, overnight. This belief that women are so incredibly stupid that they are unable to understand that to look like this woman, tons of hours in the gym and tons of drugs will be necessary. Cuz women are SO stoooopid! So we dumb things down for them and give them a dismissive, “You’re too stupid for me to teach you the fact that simple weight training will be good for you and I’ll tell you over time how so I’ll treat you like the silly person you are who obviously is only worth my sarcasm since training with weights is scary for you and I’m an expert weight trainer.”

Hey, anyone who’s said this? Please think about it.  But not from your point of view, cuz there’s others out there YO!

Two points on this: first off, what is bulky? Bulk can be defined as large and fat or muscular. Well, ok. Then yes, cupcakes will make you bulky. Like, the fat part. But not the muscular part so why are we even bringing cake or cupcakes into the conversation?  We’re talking about weight training, not diet. We WHill be talking about diet soon and if cupcakes are considered a daily dietary need in your house, we’ll be fixing that. But that’s not what we’re saying here. We want you to lift a barbell and put it back down. It will make you stronger. Period. Stronger feeling is always better than weaker feeling. Even for the untrained. If your crappy diet has you in constant inflammation, you’re picking up little cold or “flu” like bugs every other week and feel like crap on a regular basis, how do you feel once the bug has passed? Better? Stronger? More able to accomplish necessary tasks? Like going to the grocery store for more crap food? There ya go. You’re stronger. You know that feels better. You know you’re better able to do what needs to be done each day. Stronger. Better. Now think of how good you can feel if you actually trained to feel stronger and better each day and then as we go along, we’ll tweak that diet so that you’re fueling your body in ways it will run better for you and suddenly you’ll forget why you ever thought it was fun to feel like garbage. Weight training will do that. But not overnight. So we’ll start with an empty, lightweight bar and you won’t even realize you’ve suddenly just squatted 40kg for three sets of five after a few weeks but you WHill realize how good you feel. That’s what we want for you. Stronger. Bulk won’t even occur to you anymore so we don’t need to bring it up. See? Experienced trainers and strength coaches know this. So they don’t need to be glib and demeaning to you in the meantime.

Second, and sometimes most important, getting off the easy machines and cardio equipment can be scary. Yup. Scary. Why? Cuz they watch experienced lifters day after day who are lifting more weight than these women think they ever could and they’d just embarrass themselves trying. Us. We’re doing that. No, we’re not doing it intentionally. Obviously. But we’ve been doing this for so long that it’s like breathing. And sometimes we act better than them. Yup, we do. You do, and you do, and YOU! Each person who’s ever uttered this redunkulous statement does. We’re SOOOOO above these silly cardio queens and their silly elliptical cuz we train with barbells. Yup. I see it every single day on the social media scene. When I do train at a commercial gym, I put my music in; my head down; and train. That’s my way of shutting out not just the cardio queens, but usually more of the silly boys who need to get louder and louder to get the girls attention. We’ve completely ignored OUR beginnings and silly mistakes we made along the way and behave as if they never happened. Weight training is scary. There’s a lot of self esteem mixed up in there and to dismiss it with some jock strap snapping dick statement is, well, dick. Don’t be dick.

Be empathetic. Ya know, put yourselves in someone else’s shoes. Try to remember the first time you unloaded the bar from one side first so it went flying. That stupid feeling, remember that. Then go and make weights less scary for those you want to life them. I suspect that that’s the hard part. We need to lie, bargain, and coerce to get people to lift weights. That’s hard. It’s much easier to make THEM feel like a silly person and not be respectful just cuz we don’t know how to get a barbell in their hands.

So, cupcakes won’t make you bulky ladies, at least not in the way strength trainers assume you’re picturing. But strength trainers may make you feel  stupid. If that happens, fire them. They’ll feel vindicated that you really didn’t want to work hard but you’ll find a strength trainer who will be patient and the meathead you just canned will still be a meathead. You win.

We are ready for an unforeseen event that may or may not occur.

For training opportunities at tosabarbell, call or text Juli at 320-296-9313. jep6095@gmail.com tosabarbell is a private, home grown gym with three lifting platforms; squat rack; prowlers; throwing implements; bars, bumpers and everything else needed for an effective strength and conditioning program. Straightforward barbell programming including the Olympic lifts; sound (read: not fancy bullshit) diet advance for weight gain or loss; and strong coaching will ensure you will meet your goals such as becoming stronger, more explosive, and better conditioned. Juli has been coaching teams and athletes for over 20 years. She grew up participating in various sports at various levels but was always drawn to those that require strength training. She is a 2-time Master's Amercian Weightlifting Champion and holds six Master's American records. She is a Master's Weightlifting National Champion and holds three National records. She is a Master's Weightlifting World Championships Silver Medalist in 2016. Juli is also a Masters Highland Games World Champion and holds three World Records in the Braemar Stone; Heavy Weight for Distance, and Light Weight for Distance in the 45-49 class. Her 5 years of training and coaching under Mark Rippetoe has honed her coaching skills to be a top choice for you to reach your strength and conditioning goals. Juli will strongly encourage tosabarbell athletes to compete (and prepare you to do so.) However; tosabarbell is also for those who just wish to be stronger and go through life feeling better. Matt WanAt is a retired Professional Strongman who competed frequently with Strongman Champions League in Europe. He played a year of D1 football with Iowa before concentrating on his Chemical Engineering degree in Iowa City. He is a native of Wauwatosa and still remains a staunch supporter of Tosa East. This blog will be a mixture of strength notes, coaching and nutrition tips, personal shit; bacon delicacies, and a whole lot of fun.
View all posts by tosabarbell →
This entry was posted in Uncategorized and tagged Milwaukee Weightlifting, Strength Coaches, Strength training for women in MIlwaukee, Stupid Gym moves, tosabarbelll. Bookmark the permalink.