1 weeks worth of food for a 75(ish)kg female athlete. Booya! (shamelessly taken off Ingrid Marcum’s FB:)

One of the most difficult changes to make as we try to get away from our ‘fat self’  is to stop the habit of eating the fast food and focus more on the real stuff. Ask any S&C coach who has worked with a newbie on this and they’ll all say that they’ve heard the, “I’d eat better but I’m so busy and don’t really like to cook so I have to rely on other stuff” so many times that it’s almost an autofeed in our excuses book.

Look, no one expects you to be a Top Chef in cooking up your own food, especially if this is a new habit for you. But I WHILL expect that you can cook up something better than a Big Mac. Cuz that’s actually a really shitty hamburger. Grab a pound of extra lean hamburger and some Penzeys Spices (I really like the Sweet Curry) and you’ve got meat for a day (girls) or lunch (boys.) Put butter spray and lemon pepper on some fish and throw it in the oven for 6 minutes and BOOM! Meat for a day. Not hard. New? Yes, but not hard. Invest in some tupperware, you can even buy it in the grocery store now (do they even HAVE Tupperware parties anymore?) Carry food with you, bring it to work, bring it to the gym, bring it to wherever you’re going.

Yes, I understand busy and on the go. But are you home at any point and sitting around doing nothing for more than 1/2 an hour a day or a couple of hours on a Sunday? Then get in front of the stove. IMO, time spent in front of the stove is just as important as time spent in the gym. If you’re not willing to do one, why do the other? No one is powerless here unless they don’t have a stove. Then you have to go borrow your mother’s, but that’s okay cuz she’ll be happy to see you. We don’t have a microwave (no, not because we have any deep seeded political reason not to have a microwave, we just don’t have room for it) so we go over to Bigg’s Mom’s house to use hers when I need to melt some chocolate for my chocolate covered strawberries. True story. By the way, if you say that you are indeed NOT home for a half hour sitting doing nothing I will either call you a liar or an incredibly bad time manager. Or both.

I’ll tell you what, there is something completely satisfying in cooking up at least a couple of days worth of food. Knowing all you have to do is wake up, make the coffee and all of this deliciousness is waiting for you and you don’t even have to get in the car to drive thru to get it. Score. Here’s a sample of my week… 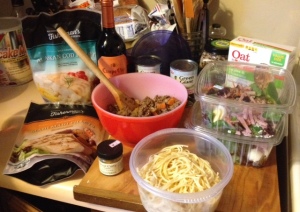 Protein Pancake mix for quick breakfast carbs; fish ready to go into the oven; wine (always); green beans (I really hate veggies but will eat these); Oatmeal; salads from the salad bar (one per day); 93/7 lean hamburger mixed with sweet onion and sweet potato; pasta with Italian dressing. I have another pound of hamburger in the fridge I’ll make up tomorrow. I’ll go and get two more salads on Wednesday, enjoy one treat of a Q’doba burrito bowl and I’m set until the Bigg guy gets home from the Middle East on Friday. When he’s home? Take this, add a meat smoking session of at least 10# of something tasty and multiply everything else by at least three. EZPZ. Time consuming? Sure, a bit. Not bad and gee whiz, whatever I miss in life while doing it will just have to be missed. I know I’ve set myself up for a great week of food. All food is portable, mostly. If you’re just so special that you absolutely can’t make some food and take it with you so you have to go through drive thru’s and eat their shitty food (remember, McDon’s has salads YO!), then go ahead and be fat and unhealthy. You win.

But not really. Cuz that excuse is old. It’s tired. And it’s bullshit. If you’re reading this and of adult age (good lord I hope parents don’t let their kids read this blog); able to function in society with a job and shit; you can cook up a pound of burger. And go make a salad bar salad with a pound of pre-made chicken on it; and boil some water for some pasta. But that’s only if you truly want to make a healthy change. Up to you.

I don’t believe in twisting yourself into knots of excuses and explanations over the food you make. When one’s hostess starts in with self-deprecations such as “Oh, I don’t know how to cook…,” or “Poor little me…,” or “This may taste awful…,” it is so dreadful to have to reassure her that everything is delicious and fine, whether it is or not. Besides, such admissions only draw attention to one’s shortcomings (or self-perceived shortcomings), and make the other person think, “Yes, you’re right, this really is an awful meal!” Maybe the cat has fallen into the stew, or the lettuce has frozen, or the cake has collapsed — eh bien, tant pis! Usually one’s cooking is better than one thinks it is. And if the food is truly vile, as my ersatz eggs Florentine surely were, then the cook must simply grit her teeth and bear it with a smile — and learn from her mistakes.

For training opportunities at tosabarbell, call or text Juli at 320-296-9313. jep6095@gmail.com tosabarbell is a private, home grown gym with three lifting platforms; squat rack; prowlers; throwing implements; bars, bumpers and everything else needed for an effective strength and conditioning program. Straightforward barbell programming including the Olympic lifts; sound (read: not fancy bullshit) diet advance for weight gain or loss; and strong coaching will ensure you will meet your goals such as becoming stronger, more explosive, and better conditioned. Juli has been coaching teams and athletes for over 20 years. She grew up participating in various sports at various levels but was always drawn to those that require strength training. She is a 2-time Master's Amercian Weightlifting Champion and holds six Master's American records. She is a Master's Weightlifting National Champion and holds three National records. She is a Master's Weightlifting World Championships Silver Medalist in 2016. Juli is also a Masters Highland Games World Champion and holds three World Records in the Braemar Stone; Heavy Weight for Distance, and Light Weight for Distance in the 45-49 class. Her 5 years of training and coaching under Mark Rippetoe has honed her coaching skills to be a top choice for you to reach your strength and conditioning goals. Juli will strongly encourage tosabarbell athletes to compete (and prepare you to do so.) However; tosabarbell is also for those who just wish to be stronger and go through life feeling better. Matt WanAt is a retired Professional Strongman who competed frequently with Strongman Champions League in Europe. He played a year of D1 football with Iowa before concentrating on his Chemical Engineering degree in Iowa City. He is a native of Wauwatosa and still remains a staunch supporter of Tosa East. This blog will be a mixture of strength notes, coaching and nutrition tips, personal shit; bacon delicacies, and a whole lot of fun.
View all posts by tosabarbell →
This entry was posted in Uncategorized and tagged Cooking, Fat America, Julia Child, Penzeys Spices, tosabarbell. Bookmark the permalink.