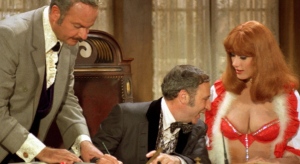 There are at least two absolutes in life (no, not death and taxes), one; when Bohemian Rhapsody comes on the readio, you sing. Loudly. B) When you happen upon Blazing Saddles on the television, you watch it. Even if the Gopher’s are playing the Fighting Sioux (suck it NCAA) in the Frozen Four.

I mentioned last week my love for the Marx Brothers. I love watching their movies because they’re talented and talent is in short supply, has been on the Big screens for at least 20 years. They sing, dance, play all kinds of music and have a comedic timing that is a thing of beauty. But most of all, they pushed the envelope. Groucho Marx and his sexual innuendos were incredibly risque in his time although I would contend that most of his lines would now be lost on the majority of young people under 30.

There were few like him. Oh sure, Bob Hope was funny, but he was white bread. His acts were fun and silly and at times suggestive, but he kept on the right side of the line.

And then came Mel Brooks.

An obviously comedic talent, his antics with Carl Reiner are legendary. My cousin Paul and I would sit and watch Get Smart on Sunday nights and laugh are little asses off. When he came up with The Producers (a musical about Adolph Hitler), no one would touch it. No one would distribute it and it was finally shown as an art film. Brooks won an Oscar for it. After a couple of unsuccessful films, along came Blazing Saddles.

Seriously, this scene alone brings tears to my eyes. (I’ve just re-watched it five times. Laughed out loud every time.)

Racism, sexism, just plain sex, homosexuality, violence, and music (I’m sure there are other politically incorrect topics I’m not thinking of too.) All rolled into one hilarious movie. Who would dare? Mel Brooks. His other movies were fun too, Young Frankenstein plays around here from about Oct 1 until Thanksgiving.

Brooks has won an Oscar, an Emmy, a Tony, and a Grammy. Solid.

We now live in a world where no one laughs at anything. Brooks would never have made it if he were just starting out now. But Blazing Saddles brings us back to a time when we used to have sense of humors and not be so fucking serious about every thing spoken or implied. In your face humor. I still love it.

If you’re quiet,  you’re not living. You’ve got to be noisy, and colorful, and lively.

For training opportunities at tosabarbell, call or text Juli at 320-296-9313. jep6095@gmail.com tosabarbell is a private, home grown gym with three lifting platforms; squat rack; prowlers; throwing implements; bars, bumpers and everything else needed for an effective strength and conditioning program. Straightforward barbell programming including the Olympic lifts; sound (read: not fancy bullshit) diet advance for weight gain or loss; and strong coaching will ensure you will meet your goals such as becoming stronger, more explosive, and better conditioned. Juli has been coaching teams and athletes for over 20 years. She grew up participating in various sports at various levels but was always drawn to those that require strength training. She is a 2-time Master's Amercian Weightlifting Champion and holds six Master's American records. She is a Master's Weightlifting National Champion and holds three National records. She is a Master's Weightlifting World Championships Silver Medalist in 2016. Juli is also a Masters Highland Games World Champion and holds three World Records in the Braemar Stone; Heavy Weight for Distance, and Light Weight for Distance in the 45-49 class. Her 5 years of training and coaching under Mark Rippetoe has honed her coaching skills to be a top choice for you to reach your strength and conditioning goals. Juli will strongly encourage tosabarbell athletes to compete (and prepare you to do so.) However; tosabarbell is also for those who just wish to be stronger and go through life feeling better. Matt WanAt is a retired Professional Strongman who competed frequently with Strongman Champions League in Europe. He played a year of D1 football with Iowa before concentrating on his Chemical Engineering degree in Iowa City. He is a native of Wauwatosa and still remains a staunch supporter of Tosa East. This blog will be a mixture of strength notes, coaching and nutrition tips, personal shit; bacon delicacies, and a whole lot of fun.
View all posts by tosabarbell →
This entry was posted in Uncategorized and tagged Blazing Saddles, Carl Reiner, Marx Bros, Mel Brooks, The 2000 Year Old Man, tosabarbell, Young Frankenstein. Bookmark the permalink.