One For the Books! 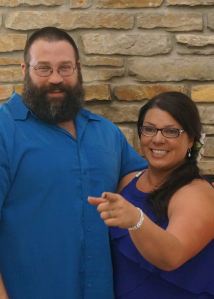 If ever in my past I complained about too much running around and being tired, I didn’t know what I was talking about. Throw a wedding and jet off to faraway lands and I quickly realized what utter exhaustion feels like.

And I wouldn’t change a thing. The days leading into the wedding day and the day itself was one for the books. Seeing so many of our friends and family journey their way to Milwaukee just to celebrate with us is so heartwarmingly overwhelming I tear up just thinking about it. I remember asking my cousin Denise months ago if it was okay to invite people who would have to fly in even knowing we were going to keep this very small and her immediate response was something along the lines of yup, even if they can’t make it, they’ll know they are special to you and appreciate it. Word. She was right. And she was here.

It was a great party, a celebration. Exactly what we wanted. So many contributed to making it special, thank you. Many details never made it to the tables, and that’s ok. “Plan B” quickly became the mantra for the entire event.

A plain, nature surrounded hall became transformed to a warm garden filled with the beautiful music, amazing food, and tasty tasty beverages. Everything represented our favorites, and I’ll treasure the day. The beautiful weather made it possible for the kids to enjoy the outdoors and many activities that Amber brought for them, I barely saw Oz once he and the boys took off for gawd knows what.

The loud, somewhat chaotic noise of McBob’s later that evening set an entirely different tone and enjoying some Guinness with their corned beef and our family and friends was relaxing and exactly what we needed. Sure there was a dust up at the end at that was a shame, but it won’t stain the day. Nope. Not possible.

My only regret of the day is that I wasn’t able to fully connect with each person. I know, unrealistic. But still. I know I gave hugs, lots of them. I’m very happy we got to spend a little bit of time with Matt’s sister, Kari and hubby. I like them. Direct, smart, grounded. I’m looking forward to getting to know them better. There were a few at McBob’s that I didn’t get to connect with and I wish that hadn’t been the case. We’ll have to make up for that this summer.

But overall, a most special day. Filled with most special love, one for the books. I’m so thankful for it all. And tired. My body clock is still on Budapest time and I pulled an all nighter yesterday getting back. So it’s nap time. I’m thankful for naps too. True story.

The wedding march always reminds me of the music played  when soldiers go into battle.

For training opportunities at tosabarbell, call or text Juli at 320-296-9313. jep6095@gmail.com tosabarbell is a private, home grown gym with three lifting platforms; squat rack; prowlers; throwing implements; bars, bumpers and everything else needed for an effective strength and conditioning program. Straightforward barbell programming including the Olympic lifts; sound (read: not fancy bullshit) diet advance for weight gain or loss; and strong coaching will ensure you will meet your goals such as becoming stronger, more explosive, and better conditioned. Juli has been coaching teams and athletes for over 20 years. She grew up participating in various sports at various levels but was always drawn to those that require strength training. She is a 2-time Master's Amercian Weightlifting Champion and holds six Master's American records. She is a Master's Weightlifting National Champion and holds three National records. She is a Master's Weightlifting World Championships Silver Medalist in 2016. Juli is also a Masters Highland Games World Champion and holds three World Records in the Braemar Stone; Heavy Weight for Distance, and Light Weight for Distance in the 45-49 class. Her 5 years of training and coaching under Mark Rippetoe has honed her coaching skills to be a top choice for you to reach your strength and conditioning goals. Juli will strongly encourage tosabarbell athletes to compete (and prepare you to do so.) However; tosabarbell is also for those who just wish to be stronger and go through life feeling better. Matt WanAt is a retired Professional Strongman who competed frequently with Strongman Champions League in Europe. He played a year of D1 football with Iowa before concentrating on his Chemical Engineering degree in Iowa City. He is a native of Wauwatosa and still remains a staunch supporter of Tosa East. This blog will be a mixture of strength notes, coaching and nutrition tips, personal shit; bacon delicacies, and a whole lot of fun.
View all posts by tosabarbell →
This entry was posted in Uncategorized and tagged Budapest, Handfasting, Hungary, Pow Wow Lodge, Wedding, Wedding songs. Bookmark the permalink.

1 Response to One For the Books!