One of the more fun aspects of WanAt life is the many sports activities of nieces and nephews. Bigg’s sister, Becky, and her hubby and kids always provide tons of entertainment no matter if it’s indoors or out. Trent’s basketball games are always fun and whenever he makes a basket he’ll still stop, look over to us and wait until we start the wave or give hyooge cheers. We’ve seen Addi, the sister, come up to bat at t-ball; completely miss a kick at soccer; and sing in the school pageant as an angel. This summer, their youngest (and Matt’s God-son) Tre will be starting t-ball so we expect more lulz at those games. In between Matt’s travel, gym sessions, and the refusal to wake up on Saturday for an 8:00am kids game we only make a game or two each per season but we love them. They love seeing their Uncle Matty on the sidelines and truth be told, these little maniacs are some of my favorite kids on the planet.

We started last Saturday with Addi’s soccer game. It was a gorgeous, albeit a bit hot, sunny morning and the little girls moving in packs around the ball was awesome. Lots of energy coming from the players, not so much from the parent helpers. Heh. It was lots of fun but I quickly notes something very puzzling coming from the coaching bench each time a little girl would fall…one (or more) of the coaching dad’s would yell out, “You okay hon? Are you sure, you okay?” Maybe they’d call them by name but each fall or crash brought about an ‘You okay?’ SRSLY???!

It’s soccer. You fall down. Even the big boys and girls fall down in soccer, in dramatic fashion no less. No one asks THEM if they’re ok. They may even get a yellow card for their antics. What part of soccer do the dad’s not understand? Your kid will fall down. They’re ok, they’ve been doing it for years. Geezus, stop babying your baby. If they’re bold enough to tie up the cleats (Addi’s are an awesome white and purple Nike pair, loved ’em) then they’re bold enough to deal with the heightened dangers of, oh I dunno, FALLING DOWN!

If YOU as a parent can’t handle that, you need to stay home during the games. Asking little girls if they’re ok repeatedly after each fall during the course of one little soccer game is annoying as fok. True story. Even some of the girls were annoyed. One particular girl with the fiercest game face I’ve seen on a 6 year old and a long brownish/blond braid gave such a look of contempt when asked if she was okay that I wanted to adopt her. Exploit that shit, she has the eye of the tiger, stop asking if she’s okay! She’s clearly fine, see how she’s walking away? She’s up. She’s fine. Shut up.

When I was a bit older than these girls, I started playing softball. I don’t know how many raspberry’s I got on my left leg from sliding (hate pants) but I do not ever recall being asked if I was okay. I would just walk over to my mom who would have the water; washcloth; and peroxide ready for me to get cleaned up before I went back out on the field. (Peroxide on raspberry’s is a special kind of hell by the way.) But no one HAD to ask if I were okay cuz I was walking away from the plate. See? If I can walk, I’m ok. These girls too. They’re fine. STFU and let ’em play.

OH! Before heading straight away to older brother Trent’s soccer game down the road (no one asked the boys if they were ok by the way) we passed a 7-11. What do you do when you pass a 7-11 on a hot, sunny day? Get Slurpee’s of course…with mustache straws. Duh. 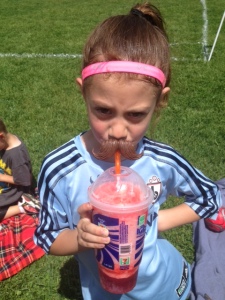 I decided I can’t pay a person to rewind time, so I may as well get over it.

For training opportunities at tosabarbell, call or text Juli at 320-296-9313. jep6095@gmail.com tosabarbell is a private, home grown gym with three lifting platforms; squat rack; prowlers; throwing implements; bars, bumpers and everything else needed for an effective strength and conditioning program. Straightforward barbell programming including the Olympic lifts; sound (read: not fancy bullshit) diet advance for weight gain or loss; and strong coaching will ensure you will meet your goals such as becoming stronger, more explosive, and better conditioned. Juli has been coaching teams and athletes for over 20 years. She grew up participating in various sports at various levels but was always drawn to those that require strength training. She is a 2-time Master's Amercian Weightlifting Champion and holds six Master's American records. She is a Master's Weightlifting National Champion and holds three National records. She is a Master's Weightlifting World Championships Silver Medalist in 2016. Juli is also a Masters Highland Games World Champion and holds three World Records in the Braemar Stone; Heavy Weight for Distance, and Light Weight for Distance in the 45-49 class. Her 5 years of training and coaching under Mark Rippetoe has honed her coaching skills to be a top choice for you to reach your strength and conditioning goals. Juli will strongly encourage tosabarbell athletes to compete (and prepare you to do so.) However; tosabarbell is also for those who just wish to be stronger and go through life feeling better. Matt WanAt is a retired Professional Strongman who competed frequently with Strongman Champions League in Europe. He played a year of D1 football with Iowa before concentrating on his Chemical Engineering degree in Iowa City. He is a native of Wauwatosa and still remains a staunch supporter of Tosa East. This blog will be a mixture of strength notes, coaching and nutrition tips, personal shit; bacon delicacies, and a whole lot of fun.
View all posts by tosabarbell →
This entry was posted in Uncategorized and tagged Female Athletes, Girls sports, Slurpees, tosabarbell, YOuth Soccer. Bookmark the permalink.