Posted on September 5, 2014 by tosabarbell

When I was young, I would dream of traveling. From a very early age, I wanted to be a flight attendant. I had flown to Detroit when I was in the 5th grade and thought it was the most exciting thing I could ever do. I remember the plane was pretty empty so the Stewardess let me sit wherever I wanted. I had my little Barbie filled vintage (well, it’s vintage now!) travel beauty case… 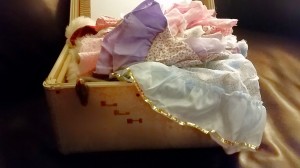 I still have my Barbie clothes filled Vintage Samsonite Vintage Beauty Case of my mom’s. I even use it for a purse when traveling in the states.

…and even though it was late in the evening, I refused to go to sleep. I didn’t want to miss a minute. Which is the reason I couldn’t be too tough on the Oz man who pretty much stayed awake for our entire red-eye flight back from Seattle in July.

Back then, the Northwest Orient Stewardesses still dressed up. Ever see a flight crew from Emirates Air walk through an airport? It’s pretty spectacular. Same with Korean Air. Uniforms perfect; hair perfect; walking in unison and altogether quite impressive. Thing is, that’s how Stewardesses ALL used to look. Now, I’m not bagging on current flight attendants. After flying regularly for work, I wouldn’t want their job. But to an impressionable 5th grader, this was the life for me. Travel to exotic destinations like Detroit, Michigan? WOW!

I kept this dream alive for many years.  I guess until I was in the 10th grade and my parents started talking about college visitations. Uhhhhhh, huh? But I don’t wanna go to college, I want to go to Northwest Orient Airlines U! So off to college I went in little Fremont, Nebraska and bye bye glamorous flight attendant job.

But throughout my 20’s and 30’s, I loved to travel. When I started traveling with Rip and crew, I had an absolute blast. Sooooooo, I get to travel around the country (along with a few harrowing trips into Canadia) and visit gyms; meet awesome people who wanted to get strong; eat amazing food from Penn Cove steamers in the Seattle area to Hot Brown in Louisville to Pepe’s Pizza in New Haven; and gather enough FF miles that after a couple of years, I was a regular in the First Class (free wine. Yabuddy!) I became besties with the Park & Ride crew and knew exactly where I could get my cawfee based on my gate number in the MSP Airport. I loved it. Though some of the traveling got tougher after moving down to Texas (I hated that 2 hour drive to DFW), I’m incredibly thankful for the opportunities I had during those years. They made me a better coach and introduced me to the Husband.

After moving on from that gig, I’ve been very fortunate to continue traveling. Strongman contests in Finnish Lapland and Lithuania; honeymoon in Budapest; Highland Games in Seattle (my favorite.) As much dreaming as I did when I was that little girl? Even I didn’t dream this big. I thought it would be cool some day to fly to Hawaii. Or a beautiful Carribean island. But never this. And especially four years ago when we lifted some heavy stuff and threw weights over a bar and around the field at my first Highlander, NEVER did I dream that I’d be getting ready to fly to Scotland to throw at a Highland Games with tons of American friends and most importantly, my hubby.

But here we are. And no, I haven’t started packing. (I’m a late packer, leave Tuesday afternoon so probably will dig up my suitcase Tuesday morning. It drives Matt nuts who likes to pack early and get to the airport even earlier. Suffice it to say, we don’t necessarily travel well together. Meeting up in airports in faraway lands is more romantic anyway. True story.) I’ve already talked about wanting to represent America in a positive light when I travel overseas so I’m probably nicer when I’m there. Most of the time anyway. Heh.

Of course most of us know how competitive I am and of course, the competition is the reason we’re going. But as I get closer to digging out the big suitcase, I get more and more excited for the adventure. All of it. Breathing Scottish air; anticipating running into people we may know about town; sharing an apartment with fellow competitors and new friends; competing with the best. The food; the locals; the customs. And afterwards? Heading to London to share time and space with Strongman friends Laurence Shahlaei and his beloved Liz and hopefully a couple of others. Getting to train with one of Britain’s strongest; laughing with my Lapland buddy; Stonehenge; Matt’s Birthday celebration…just everything. Sharing it all with Matt. WOW.

But because we’re, ya know, ‘Merica’s. And because it’s Friday Jams.

Toby Keith,  Courtesy of The Red, White, and Blue.

For that is the mark of  the Scots of all classes; that he stands in an attitude to the past unthinkable to Englishmen, and remembers and cherishes the memory of his forebears, good or bad; and there burns alive in him a sense of identity with the dead even to the twentieth generation.

For training opportunities at tosabarbell, call or text Juli at 320-296-9313. jep6095@gmail.com tosabarbell is a private, home grown gym with three lifting platforms; squat rack; prowlers; throwing implements; bars, bumpers and everything else needed for an effective strength and conditioning program. Straightforward barbell programming including the Olympic lifts; sound (read: not fancy bullshit) diet advance for weight gain or loss; and strong coaching will ensure you will meet your goals such as becoming stronger, more explosive, and better conditioned. Juli has been coaching teams and athletes for over 20 years. She grew up participating in various sports at various levels but was always drawn to those that require strength training. She is a 2-time Master's Amercian Weightlifting Champion and holds six Master's American records. She is a Master's Weightlifting National Champion and holds three National records. She is a Master's Weightlifting World Championships Silver Medalist in 2016. Juli is also a Masters Highland Games World Champion and holds three World Records in the Braemar Stone; Heavy Weight for Distance, and Light Weight for Distance in the 45-49 class. Her 5 years of training and coaching under Mark Rippetoe has honed her coaching skills to be a top choice for you to reach your strength and conditioning goals. Juli will strongly encourage tosabarbell athletes to compete (and prepare you to do so.) However; tosabarbell is also for those who just wish to be stronger and go through life feeling better. Matt WanAt is a retired Professional Strongman who competed frequently with Strongman Champions League in Europe. He played a year of D1 football with Iowa before concentrating on his Chemical Engineering degree in Iowa City. He is a native of Wauwatosa and still remains a staunch supporter of Tosa East. This blog will be a mixture of strength notes, coaching and nutrition tips, personal shit; bacon delicacies, and a whole lot of fun.
View all posts by tosabarbell →
This entry was posted in Uncategorized and tagged Friday Jams, Highlands, Inverness, Liz & Loz, MWC2014, Scottish Highland Games, Toby Keith. Bookmark the permalink.