Now that throwing is off the books for a while, we need to address the best dressed list for the season.  So here goes in no particular order:

Kate is a master with a scissors and will cut up that Games shirt so artfully that you could auction it off as a designer piece at the end of the day. She basically starts once shirts are handed out and will throw/cut/throw/cut until she’s done. Usually by the third or fourth event. I’d like to imagine I could cut up a shirt as well as her someday but truth be told, I’m just not creative enough.

If you’ve ever thrown with Katie, you understand that she’s a bit jumpy. Kinda like a mexican jumping bean you could get in a clear plastic container when you were a kid. It’s pretty rare you see her standing still. Luke calls her a meth squirrel. Pretty accurate. But when she is sporting her hammer boots with the blades on, her pep step takes on a whole new dynamic. I’m not sure if her feet even touch the ground when she runs out to the field, I mean I assume they have to. You just don’t see it. Well done meth squirrel. Well done.

Best Games to Check In  – Celtober Games, Ft. Worth Texas by TCAA

Here’s how it goes down when you walk up to the field…First you get a hug from one of the coolest throwers on the planet, Tammy Kentner. Then you get a lick from Mack the dog (gawd I hope he doesn’t have the Ebola.) Then a big hug from awesome hubby Kevin. THEN you check in. Get a cool shirt, a bag of goods and a full blown tour of all the food and drinks that are available to you that day (also, around the 7th or 8th event, they’ll let you know where the beer is. The FREE beer.)  Although there are actually few Games with poor check in processes, and most are top notch, giving Jules free shit at the beginning will get you on the Best Dressed list. True story.

Ever see a really big guy move really fast? Like, lightening fast? No? I have. When Jake Sullivan’s final hammer wind was let go into the cage while Andy Vincent was walking  by (with his head about a foot away from the hammer) at a leisurely pace. See, it’s actually pretty cool when a top level athlete displays their explosiveness in front of your eyes cuz I’m pretty sure Andy jumped about 30 feet forward in the blink of an eye. All was well, the cage stopped the hammer but I noticed before the next thrower that all of the Pro’s moved their boxes and their arses out of the line of fire. Heh.

When fellow thrower and Scotland mate Melanie Mellinger and I were hanging out in the tent post frozen Arnold throwing, she said that her hubby Dustin had found a place to eat dinner with specialty grilled cheese sandwiches. I mentioned it to the big guy and within 30 seconds he had the menu up on his phone and said, ‘we’re in.’ So I have no idea if they wanted alone time cuz we barged in on that party. I ordered the Cuban War Pig. It was a swiss grilled cheese sandwich with honey ham, roasted pulled pork, mojo glazed pork belly and a few condiments. Pork belly and pulled pork. On a grilled cheese sandwich. With Dustin and Mel. Now, this was actually a really hard choice because we have had some absolutely amazing post Games meals with so many people that we love. But seriously, this: 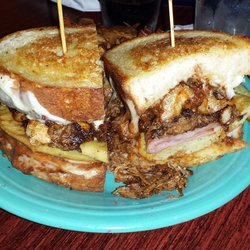 This is another tough one, we’ve had so many. But honestly, the best one is about two blocks away at the North Ave. Grill. First off, if we’re having a pre-Games breakfast there it means I got to sleep in my own bed. The meat lovers skillet (no potatoes, too greasy) and pancake is the absolute best pre-Games breakfast I’ve had. I get just full enough that I’m a hint uncomfortable at first but we walk home, load up and head to the field. By the time I get there, I feel great and have energy for hours. The service is pretty hit and miss up there but that’s ‘tosa. And ya know, again, it’s home.

At the end of a tough day when the world went to shit back home, all I want to do is hit the beer garden with my cousin Paul. I adore my cousin Paul, he’s one of my most favorite people on the planet and we rarely get to share a beer alone because of so much family time. Yes, I like it when I get to spend time with his awesome  kids but sometimes I just want to hang with Paul or his sister Denise (she and I are planning a girls weekend. Look out Chicago, here we come!) Anyways. So I go to grab my wallet and, whut? It’s gone. Now, as organized as I try to keep my shit during the day, others had come in and tossed my backpack around and even though I’d reorganize, I guess it was just too much fun dumping it out. Who knows. All I know is that my wallet was gone. Totally gone. Shit day amazingly turned worse. I only had about $80 cash in there but I was more worried about the cards and the ID and my punch card for my mani’s/pedi’s. We instantly started checking the bank accounts on-line, no movement. That’s a good sign. Oz ran to lost and found but nothing had been turned in. OH! Beyond what was IN my wallet, I actually really like my wallet. It’s the perfect size for traveling with my passport, but isn’t too hyooge that it won’t fit into a small purse.

The next morning Matt went and checked lost and found again AND THERE IT WAS!!!!  Yes, the cash was gone. Bummer. Don’t care. I’ll assume they spent it at the beer tent which is exactly where WE were going to spend it. I got my shit, my ID, my nails punch card and my wallet. Score. Thank you good people of Washington. I mean that. They could have been complete dicks and just thrown it in the trash and I’d never have known but they made life easy for me and I’m thankful for it. 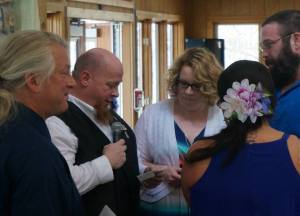 I’m always impressed with throwers who keep their energy high all day. I’m not one of them. I conserve. I carry my chair with to each event so I can sit when I’m not shagging or throwing. This is a shared award for Dawn Higgins and Teresa Nystrom. Throwing with Dawn is an absolute joy. She’s kick ass, funny, determined, a great competitor but still ready to crack a smile at a moment’s notice. She treats everyone fairly and her pep step around the field goes all the way until the last event. Even in the snow. Teresa is the same way. Her smile is never far away and even if she struggles with a throw, she’ll walk away and immediately try to fix it for the next one instead of getting down on herself. I love throwing with women like this. High expectations of themselves but always encouraging and positive through the end.

I don’t know how the people with a Mt. Rainier view get anything done in life. All I want to do when I’m there is stop and stare. I know I have a better picture of her during a drive in from our hotel but I couldn’t find it. But even this hazy one brings back the feeling of looking on at her magnificence.

There’s more…stand by. But now I’m hungry and I got to open up the new peanut butter so it’s time to dig in. Yeah me.

Of all the tyrannies that affect mankind, tyranny in religion is the worst.

For training opportunities at tosabarbell, call or text Juli at 320-296-9313. jep6095@gmail.com tosabarbell is a private, home grown gym with three lifting platforms; squat rack; prowlers; throwing implements; bars, bumpers and everything else needed for an effective strength and conditioning program. Straightforward barbell programming including the Olympic lifts; sound (read: not fancy bullshit) diet advance for weight gain or loss; and strong coaching will ensure you will meet your goals such as becoming stronger, more explosive, and better conditioned. Juli has been coaching teams and athletes for over 20 years. She grew up participating in various sports at various levels but was always drawn to those that require strength training. She is a 2-time Master's Amercian Weightlifting Champion and holds six Master's American records. She is a Master's Weightlifting National Champion and holds three National records. She is a Master's Weightlifting World Championships Silver Medalist in 2016. Juli is also a Masters Highland Games World Champion and holds three World Records in the Braemar Stone; Heavy Weight for Distance, and Light Weight for Distance in the 45-49 class. Her 5 years of training and coaching under Mark Rippetoe has honed her coaching skills to be a top choice for you to reach your strength and conditioning goals. Juli will strongly encourage tosabarbell athletes to compete (and prepare you to do so.) However; tosabarbell is also for those who just wish to be stronger and go through life feeling better. Matt WanAt is a retired Professional Strongman who competed frequently with Strongman Champions League in Europe. He played a year of D1 football with Iowa before concentrating on his Chemical Engineering degree in Iowa City. He is a native of Wauwatosa and still remains a staunch supporter of Tosa East. This blog will be a mixture of strength notes, coaching and nutrition tips, personal shit; bacon delicacies, and a whole lot of fun.
View all posts by tosabarbell →
This entry was posted in Uncategorized and tagged Best Dressed, Enumclaw, Highland Games 2014, Melt, Mt. Rainier, North Ave Grill. Bookmark the permalink.