When I was very young, our neighbor/baby sitter got married. Her name was Mickey. I thought that was cool. I didn’t know girls could be named Mickey. She also had very long, beautiful brown hair circa 1972 that I got to brush for hours when she baby sat. (When she cut it off, I was mad. I didn’t understand why a girl with such beautiful hair would cut it off. It went against everything I believe in as a young girl whose mom wouldn’t let me grow mine long. I’ve gotten over it.)

I was young enough during the wedding that memories fade in and out. I remember our Northern Minnesota church layout (stealing sugar cubes from the kitchen and eating them whole), I remember at some point keeshing out on some chairs (the pastor must have had a long wedding sermon, heh), and I remember this song.

One of my guilty pleasures on the boob tube is watching Say Yes To The Dress. It’s a wedding dress show that has fun, funny, moving, self-absorbed bridezillas and fun staff all rolled into one. The funny dynamic between the bride and bride’s mom is usually Lulz but sometimes sad. Mommy wants HER day perfect. Everything foked up about wedding planning all rolled into a 30 minute segment. A reoccurring theme is that little princess has been dreaming of her wedding since she was a little girl. That blows my mind. FoRealz? I dreamt of being an Olympic skier when I was a little girl. Then I dreamt of being a stewardess. Then just basically not living at home. Many things, but not a bride. I had no idea what I wanted for a wedding when the first one came around (big mistake, we tried to please everyone and in the end pleased no one. Lesson learned) but I knew what song I wanted.

John Denver’s Follow Me. And it was perfect. The marriage crumbled quickly but that’s on us, mostly. I whill say, when family brings all of their crappy baggage to a wedding day with as much shitty, jealous, selfish, cruel, and self-absorbed energy and toss bombs of it all at the couple for however many hours it took them to try to solidify a life together, shit’s bound to stick. But the other 98% is on us. Live and learn.

But the music was there. It was John Denver, a bright spot of my childhood. And it was good.

Fast forward to last year. When Matt and I were planning what we wanted to do for a “wedding” (no church, no big dress, no fuss…as much as possible) we knew we wanted to make it a special day (no quick courthouse, well, more on that later) so it wouldn’t get lost in the shuffle of life. Our dear friends spoke about their handfasting and how special it was and we thought, Huh, that sounds like us. So that’s what we did. 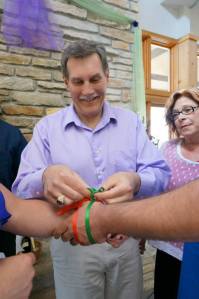 So many of our friends and family showered us with amazing blessings and well wishes. The day was perfect and we’re so thankful for the memories. Including the music.

Greg, Malia, and Angel gave us the most beautiful Hawaiian music a girl could ask for. (Yes, we got in Follow Me but later during music that played while we had cocktails and PuuPuu’s.) While almost all music was Hawaiian, I wanted to fit in Edelweiss. The Sound of Music is my favorite film and when Christopher Plummer sang Edelweiss originally, I could feel all of his love for his homeland, his family, and his eventual wife come out in music. I love it. That’s what I wanted us to share on that day. Loving energy.

The day was amazing and though there were a few important characters who couldn’t join us, we knew that their well wishes were in attendance. OH! How to circumvent that pesky “legal” thing that wasn’t present in our Handfasting? Bolt over to the courthouse a few days before and get’r done. I felt kind of bad for the JP, she was trying to make it special. But that’s not our special day… 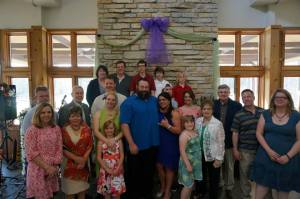 Let the wife make the husband glad to come home, and let him make her sorry to see him leave.