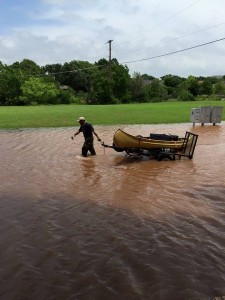 Gant Grimes in Wichita Falls, TX checking the mail (otherwise known as; who needs a truck to pull a boat?)

A while back, I had wrote about the value of strength (reoccurring around here actually.) This particular day, our friend who is a graphic designer and created the tosabarbell (it’s TOE-sa, not TOSS-a) logo asked a very good question. He says, “Why does strength matter? I sit at my desk all day and maybe need to pick up a 50# bag of grass seed on occasion but that’s it. Why do I need to be strong?”

Well sure, there were a few snickers here and there and I quashed that as best as I could. Why? Because this is EXACTLY the demographic that needs to understand why strong counts. It’s easy for me to tell people who are already in the gym that they need to be strong. They get it. They’re doing it. It means something to them. But our pal Mike is the poster child of who really needs this message but rarely hears it and certainly doesn’t understand it.

At the time, I gave him the standard, “Well wouldn’t you rather 50# felt like 5#? Cuz strong does that.” But I’m amending my answer to this:

BECAUSE SOME DAY, YOU MAY NEED TO GRAB YOUR WIFE, AND YOUR KIDS, AND YOUR DOG AND GTFO IN A HURRY AND IF YOU’RE NOT STRONG ENOUGH TO DO THAT, ONE OF THEM (OR ALL) WILL BE LEFT BEHIND.

For example, some friends down in Wichita Falls, TX are going through a bad time right now. After four years of record droughts, they now have record rainfall and flooding. Can’t catch a break. The picture above is of Gant Grimes from his Facebook getting the mail in his housing development. Ironically enough, the exact same location where we shot a video of him rowing a C2 in the back of a pick-up to showcase that rowing doesn’t have to be boring. It was a fun day. But now the days are serious and these folks are out of their homes while red water and mud and debris and snakes and God knows what else is making residence. Not good.

Gant’s (and many more) shit is under water so he had to get his family safe. And he did. While, I’m sure, being helpful to his neighbors and anyone else who didn’t have the strength to do what needed to be done.

And that, people who don’t think strength is important, is the reason.

ARE YOU STRONG ENOUGH TODAY TO GET DONE WHAT NEED BE IF SHIT GOES BAD?

No? Then get to the gym (my gym if you’re in the area) and get to the fridge because muscle doesn’t just happen in the gym. Eating to support strength gains *GAINZ4DAYZ* is equally as important. Because sure, you may be sitting on your computer most days and maybe don’t live where weather can tear your life apart or never ride in a car so won’t get in a wreck or don’t walk out of your house where the big bad world can fuck up your day and you never have to worry about needing to be strong to survive. But then you’d be a cartoon character and they can’t read blogs, soooooooo. 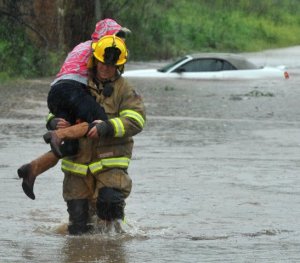 If you’re going to drive your car into four feet of water, please make sure there is a strong firefighter nearby to save your stupid ass.

When the waters do recede, red mud will be left as parting gifts. Send a prayer to Texas if you will, they could use them.

Sending strong thoughts to Gant and his family and all the people of Texas who are affected (and no, having to drive around a flood barricade on the way to Whataburger doesn’t count. If you complain about that on the FB you’re a douche.)

Permanence, perseverance, and persistence in spite of all obstacles, discouragements, and impossibilities: it is this, that in all things distinguishes the strong soul from the weak.