Posted on February 1, 2016 by tosabarbell 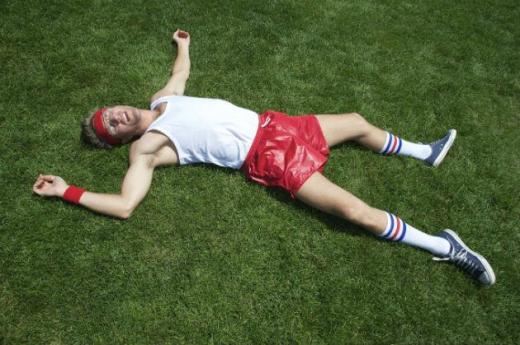 Matt and I spent the day in Chicago yesterday to handle and support our friend, Sue Hallen, as she competed in her first powerlifting meet after a year and a half hiatus. In general, spending the day with Sue and Ruth (Ruth was co-director of the meet and busy judging) is just a really good day. Doesn’t matter if it’s on the field or in a gym or watching their track meets (that’s NEXT Sunday!) They’re the best. Ruth has been competing in powerlifting since 1979.

Let that sink in a bit. Nearly 40  years. When I see people behaving as if they know half a shit after competing in one powerlifting meet it makes me want to vomit on their shoes. As for Ruth and Sue, their stories alone are worth the price of friendship admission and their run-ins and friendships with most of the greatest strength athletes of our time is more fun and impressive than anyone I’ve ever met. Ever. 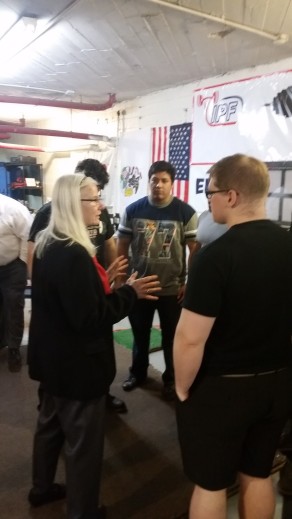 Ruth going over the rules with the loaders and spotters.

Sue’s return to the platform was an important one, not in numbers, but in gaining some confidence. The last time she competed was in South Africa at World Championships and she bombed out in her squat. No squat. No total. So while the numbers yesterday were lower than she cared for, her success in good lifts and a good total meant the goals of the day were achieved. Well done Sue.

While we were getting ready for some bench warm ups another Masters lifter who Sue knows asked to warm up together. Eventually she asked for some hand offs but other than that, I wasn’t paying attention to what she was doing. When we got into the lifting area, I asked if she’d still like hand-offs (you jump I jump Jack) and she appreciatively asked me to hand off to her during her attempts.

Barbara (her name) was a very nice woman and this was her first meet back after an 8  year break. She was doing bench only and was pretty excited to be there. For her first attempt (70kg), she made the lift but got called when her butt came off the bench. She put in a 2.5kg increase for her second attempt but missed the lift. Her 3rd attempt seemed good coming down but it was quickly apparent that she was out of gas. Bombdiddy bomb.

Heyyyyyy ladies! Every year north of 40 presents different challenges, north of 50? Well, I’ll start dealing with that next year. But mostly I’ll know this, a 38 rep warm up at the meet is more reps that some take in a training cycle. For sure more reps than a training session if you’re smart no matter WHAT age you’re at.

38 reps. I can’t even. Sue took an eight rep warm up. One of her biggest pieces of advice to me last fall before my weightlifting meet was on warm-ups, less is more. I’ve talked about the warm up area at Savannah and while I believe that the volume lifted was too much for master’s ladies, I can’t imagine any of them did a 38 rep warm up. Geezus.

What I told Barbara before we parted was this, if you were MY lifter you’d never to 38 reps again in one sitting. EVER. Poor girl.

Anyways. We had an absolute blast, Sue hit her total, and we got to spend the day in a gym that’s been around since 1978 in the basement of a cool building in Chicago.

Sue and Dennis Brady of B&W Gym on the north side of Chicago.

But if just one person reads this post and says to themselves, huh-maybe I shouldn’t be taking 30-40 reps of FUCKING ANYTHING ever but especially in a meet or Games warm up area, then my job here is done.

But they probably won’t.

Only two things are infinite, the universe and human stupidity, and I’m not sure about the former.

For training opportunities at tosabarbell, call or text Juli at 320-296-9313. jep6095@gmail.com tosabarbell is a private, home grown gym with three lifting platforms; squat rack; prowlers; throwing implements; bars, bumpers and everything else needed for an effective strength and conditioning program. Straightforward barbell programming including the Olympic lifts; sound (read: not fancy bullshit) diet advance for weight gain or loss; and strong coaching will ensure you will meet your goals such as becoming stronger, more explosive, and better conditioned. Juli has been coaching teams and athletes for over 20 years. She grew up participating in various sports at various levels but was always drawn to those that require strength training. She is a 2-time Master's Amercian Weightlifting Champion and holds six Master's American records. She is a Master's Weightlifting National Champion and holds three National records. She is a Master's Weightlifting World Championships Silver Medalist in 2016. Juli is also a Masters Highland Games World Champion and holds three World Records in the Braemar Stone; Heavy Weight for Distance, and Light Weight for Distance in the 45-49 class. Her 5 years of training and coaching under Mark Rippetoe has honed her coaching skills to be a top choice for you to reach your strength and conditioning goals. Juli will strongly encourage tosabarbell athletes to compete (and prepare you to do so.) However; tosabarbell is also for those who just wish to be stronger and go through life feeling better. Matt WanAt is a retired Professional Strongman who competed frequently with Strongman Champions League in Europe. He played a year of D1 football with Iowa before concentrating on his Chemical Engineering degree in Iowa City. He is a native of Wauwatosa and still remains a staunch supporter of Tosa East. This blog will be a mixture of strength notes, coaching and nutrition tips, personal shit; bacon delicacies, and a whole lot of fun.
View all posts by tosabarbell →
This entry was posted in Uncategorized and tagged B&W gym, Black Iron gyms, Dennis Brady, womens powerlifting. Bookmark the permalink.