Monday Bacon: From The Beginning 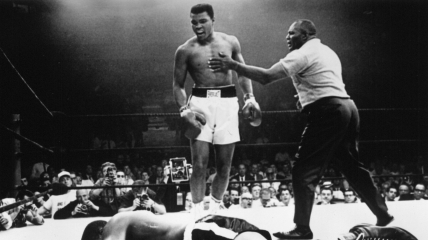 When we had tosabarbell built up, I had very specific ideas on the energy I wanted. See, I had just spent two years in a gym where A. I loved it’s people; but B) I hated it’s energy. Oppressive. Aggressive. Mean. Abusive. I lost count of how many people, both regulars and visiting dignitaries, told me I needed to leave for my own good. They were right.

I wanted tosabarbell to be strong; you play here you work hard; understanding; stern yet calm; you learn; you apply; your coach is constantly learning; and it’s boundaries are firm but fair. Our walls were filled with plates and barbells and as I looked to fill it’s space without cluttering it up, I started looking for just the right picture. Oh sure, there are some very kick ass Arnold posters that you see here and there at true strength gyms. And they are awesome. There is a scene from Pumping Iron where he is posing in his last Mr. Olympia and looked at the camera with a smirk on his face. I love that look. I can’t find it in a poster though, only the one where his arms are spread as if he’s saying, “just look at all my glory.” That’s pretty cool. But, imo, a bit overdone in gyms. The smirk is gold, if I found that one I’d get it.

But then I came across this poster:

Yup. That’s it. If you’ve seen any training videos out of tosabarbell, you’ve seen this poster. From the beginning, it’s been on the wall.

I grew up watching Muhammad Ali on the Wide World of Sports. His bantering with Howard Cosell is legendary and, I believe, some of the best television in the history of television. There were even some Saturday’s when my dad would have the luxury of an afternoon lounge and come watch with me. And this is where our parents can unintentionally impact our lives with one glib little statement. When Ali was on, touting himself as “the greatest”, Pastor John laughed and said something to the effect of ‘no one can call themselves the greatest, except for Muhammad Ali.’

BOOM! The respect my dad showed for Ali was impressive to me. Through hard work and a belief in oneself, you can achieve good things. Maybe even great things if you’re lucky enough.

That’s the energy I wanted, and still do, for tosabarbell. And I have it. Oh sure, there have been a few folks here and there where we’ve had to part ways for one reason or another. But at the end of the day, I protect the energy of my gym. If someone threatens that energy, they’re out. Sorry I’m not sorry. The people who train here are high in integrity and low in bullshit.

I believe I can honestly say that Muhammad Ali was one of my first sports role models. Now, I had absolutely no interest in boxing. Yes, it’s kick ass (boxer Scott LeDoux had a bar on the edge of Nordeast Minneapolis we would hit often. The upstairs was more ‘club’ but we’d head downstairs after grabbing a girly drink and listen to his stories. He was the shit and could portray boxing as a ballet mixed with a locker room brawl through his stories. I’m a lucky girl to be able to listen to them.) But I knew that the attitude and self worth that Ali gave himself was something to behold. Nothing I possessed until, probably, I hit 40 something.

And now he’s gone. Well, quite honestly, he’s been gone for a while for those of us not directly related. His lighting of the Olympic torch in Atlanta is embedded in many of us. The shaking; almost questioning look of the true G.O.A.T. It was heartbreaking for me to watch. But then I realized that it was actually a gift. Because we’re not always going to be who we are in our strongest moments and that’s okay. We’ll falter and if lucky enough, grow old. And right now, we don’t know what that will look like.

But those who love us will know. They’ll know what we “once were.” The attitude; the skill; the talent, and even the ego. They’ll remember. And maybe they’ll tuck a little bit of that attitude into their heart and let it come out in their own work. Because, I think, that’s what I do with those memories of Muhammad Ali looking straight into a camera telling the world that “…I’m in a world of my own.”

Ballsy. I like that. I’m confident you’re not surprised.

It’s not bragging if you can back it up.

For training opportunities at tosabarbell, call or text Juli at 320-296-9313. e-mail to jep6095@gmail.com At tosabarbell, I build relationships cultivated in a strength and learning environment. There is no 12 week magic pill program to strength but rather a lifetime commitment to be the very best and most useful human you can be. tosabarbell is a private, home grown gym with three lifting platforms; squat rack; prowlers; throwing implements; bars, bumpers and everything else needed for an effective strength and conditioning program. Straightforward barbell programming including the Olympic lifts; sound (read: not fancy bullshit) diet advance for weight gain or loss; and strong coaching will ensure you will meet your goals such as becoming stronger, more explosive, and better conditioned. I have been coaching teams and athletes for over 30 years. I grew up participating in various sports at various levels but was always drawn to those that require strength training. I have multiple local, national, and world records in the sports of Weightlifting and Highland Games Heavy Events as well as a combined total of 5 World Championships. My 5 years of training and coaching under Mark Rippetoe provided a wide range of influence from some of the top strength & conditioning and throwing coaches in the country. I will strongly encourage tosabarbell athletes to compete (and prepare you to do so.) However, tosabarbell is also for those who wish to be stronger and go through life feeling better. Matt WanAt is a retired Professional Strongman who competed frequently with Strongman Champions League in Europe. He played a year of D1 football with Iowa before concentrating on his Chemical Engineering degree in Iowa City. He is a native of Wauwatosa and still remains a staunch supporter of Tosa East. This blog will be a mixture of strength notes, coaching and nutrition tips, personal shit; bacon delicacies, and a whole lot of fun.
View all posts by tosabarbell →
This entry was posted in Uncategorized and tagged Arnold, Ballsy, Boxing, Confidence, Ego, garage gyms, Muhammad Ali, Nordeast Minnapolis, Scot LeDoux, tosabarbell. Bookmark the permalink.