It is a sad fact that, in general, folks don’t read enough these days. I blame Obama. And Carter.

I’d like to highlight my most recent read. It was entertaining and thought provoking. It evokes emotion like nothing I’ve read in a long time. While tragic, it remained light hearted and you just never knew what the next page would bring. That, my friends, is a good book.

Andy Riley’s, Dawn of the Bunny Suicides is one in line of many highlighting this oft tragic event. It is sure to make you think from now on, while managing daily menial tasks, how your actions are affecting suicidal bunnies. Example:

The Ozman just took his drivers test last week. He was doing great, but then almost got t-boned in an intersection because he failed to look left. He had his step-mom’s car so he said they were playing down the actual incident a bit. Heh. Anyway. Because of that, he gets to try again this week. He’ll be fine. I’m going to make sure he looks out for suicidal bunnies in cones though before he goes. And cars in intersections. I’m helpful that way.

I’m not very good at going to the movies. Usually I’ll just fall asleep and I don’t like to pay $10 to take a nap. Matt and I decided to hit a Tuesday cheap night where all movies are $5. Cool deal. We sat in the bistro lounge where, when you push a button, they bring you all the food and drinks you want. VERY cool deal. Our tab was $85. So that’s the last budget movie we’ve been to. Live and learn, folks. It’s part of life.

We go through the limes here at tosabarbell. Tell ya what, we’ll never get the scurvy in this house! Well, unless we run out of gin and tonics or brandy mules. Then we’ve got bigger problems than scurvy. Last Friday was hot. SO hot. Like, 80 something. How people bitch about winter and like the 80’s I’ll never know. Matt was on the road last week and caught an earlier flight home. He rolled in, hot as fok, and announced he was making a brandy mule. I was all, “Nooooooo, we’re almost out of limes and I want a gin and tonic when I’m done training!!!” So he ran to the store and got limes. Crisis averted.

The kids and I lived in a cozy little town called Hutchinson in Minnesota. Our house was right off the country highway JUST as you entered town from the north which meant we saw people getting pulled over all the time because they were still going 80 and the speed limit changed to 30 parallel to our street. The city decided to build roundabouts to try to limit crashes on heavy intersections AND slow down those entering town.

The caveat was that this was the route truckers/haulers would use, including those extra long carrying the bases for windmills. The first convoy that came through, post roundaboot, and tried to maneuver the narrow passage immediately got stuck. Uhhhh, fail. They tore up the roundabout; the grass on the roundabout, and stopped all traffic for about two hours until they could get help.

A week later? Same thing. The next convoy did the exact same thing. Now, I am no windmill carrying convoy expert but if I were, I’d call ahead and say something to the effect of, “hey guys, don’t go on that roundabout. It’s a trap.”  So after it happened the third time (yes, there was a 3rd time. Wonders never cease) the route changed to a much longer, but straight, one from the west AND was given a police escort in town. It was very dramatic. But I still think of it whenever I see a windmill. Now I’ll think of that and suicidal bunnies. Life is strange.

Call me Ismael! or something like that. I dunno. I never read Moby Dick. You could almost ask yourself how the bunny stayed alive in the ocean, found tape and situated himself on the snout of a whale. Don’t do that, it ruins the funny.

Yesterday we went and watched Sue Hallen and Ruth Welding throw at a Masters track & field meet here in the Milwaukee area. Well, kinda. They started at 9 and I didn’t get out of bed until around 8 or so. I had to cook my food for the day and I made such amazing coffee that I had to sit down and enjoy it. At 10, I told the hubs it was uppy uppy time and then HE sat down with a cup of amazing coffee and by 10:45 I’m crackin’ the whip to get movin. So we only saw their weight for distance event which was still awesome. We also went and got some post throws food and beverages and had the most awesomely horrendous service that  I was pretty sure we were being punked. (Example: at one point, she came and asked us if we were ready for the bill. Pretty normal, right? The problem was that our food wasn’t out yet and we hadn’t been sitting there too long. The list goes on, but that one was a first for me.)

Lastly, but shirley not least: 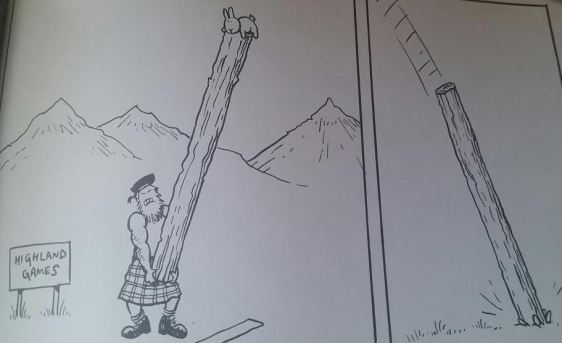 Now, hopefully the bunnycidals that wish to go this way know to attach themselves to Cabers being thrown by folks with last names such as Wilson; Vincent (pick one, doesn’t matter), or Crowley (may also use Steingraeber, also doesn’t matter.) They’re wasting their time if they pick one of mine, I haven’t turned a Caber yet this year. That may be more sad than suicidal bunnies. It’s a toss up.

At the end of the day, the mission is clear. We need to read more. I’m going to go out and get another Riley book. He has one called, “great lies to tell small kids.” I already love it. Stay tuned for a review.

For training opportunities at tosabarbell, call or text Juli at 320-296-9313. jep6095@gmail.com tosabarbell is a private, home grown gym with three lifting platforms; squat rack; prowlers; throwing implements; bars, bumpers and everything else needed for an effective strength and conditioning program. Straightforward barbell programming including the Olympic lifts; sound (read: not fancy bullshit) diet advance for weight gain or loss; and strong coaching will ensure you will meet your goals such as becoming stronger, more explosive, and better conditioned. Juli has been coaching teams and athletes for over 20 years. She grew up participating in various sports at various levels but was always drawn to those that require strength training. She is a 2-time Master's Amercian Weightlifting Champion and holds six Master's American records. She is a Master's Weightlifting National Champion and holds three National records. She is a Master's Weightlifting World Championships Silver Medalist in 2016. Juli is also a Masters Highland Games World Champion and holds three World Records in the Braemar Stone; Heavy Weight for Distance, and Light Weight for Distance in the 45-49 class. Her 5 years of training and coaching under Mark Rippetoe has honed her coaching skills to be a top choice for you to reach your strength and conditioning goals. Juli will strongly encourage tosabarbell athletes to compete (and prepare you to do so.) However; tosabarbell is also for those who just wish to be stronger and go through life feeling better. Matt WanAt is a retired Professional Strongman who competed frequently with Strongman Champions League in Europe. He played a year of D1 football with Iowa before concentrating on his Chemical Engineering degree in Iowa City. He is a native of Wauwatosa and still remains a staunch supporter of Tosa East. This blog will be a mixture of strength notes, coaching and nutrition tips, personal shit; bacon delicacies, and a whole lot of fun.
View all posts by tosabarbell →
This entry was posted in Uncategorized and tagged andy riley, bunny suicides, death by highland games, drivers test, limes, literature, moby dick, ozman, pirates, tosabarbell, track and field. Bookmark the permalink.