Posted on October 7, 2016 by tosabarbell

Levenda, Ronay, and myself after our session.

We were very fortunate in Germany in that I had four Americans in my lifting group. Now, in general, my experience with Weightlifting is very different than Highland Games in that people pretty much keep to themselves or their team and there’s not a lot of chit chat between platforms. Until now.

During the line-up announcement when our local girl (she is an American living in Munich), Kris’, name was announced I gave a huge  WHOOP! and clapped as obnoxiously as I could. Next up was standing World Champion, Ronay. Kris, myself, and Levenda (the 75+ woman in my group) joined in the WHOOPing and clapping. By the time we got to Levenda, all were on board and we made sure the room knew who the Americans were.

I dunno. The day opened my eyes to the fact that there were so many countries represented at this World Championship and so many stuck together in groups that the single Americans walking around all day needed some unity. And we had it. It was awesome.

As usual, the warm up room was mass chaos. As long as I’m safe, I don’t really care about that. We had a big group and this was the first time Matt has handled a lifter in such a setting. It was my first time lifting in such a setting. This meant that we both needed to be aware of how our energy was both feeding and bouncing off of each other and, in my opinion, we did great. There were a couple of times I encouraged Matt to take a few deep yoga breaths and when he did, he visibly relaxed and went back to work.

Kris and Levenda lifted before Ronay and I and we were able to check in to see how they did. I don’t remember Kris’ numbers but I know she took 3rd in the 69kg class along with Ronay’s consecutive World Championship win. Levenda went 6 for 6 (lucky girl) and PR’d her lifts (good time to PR.) Afterwards, she stuck around the platform during both lifts and gave moral support to Ronay and I and let me tell you what, that means something to me. She had family in the hall waiting on her and could have already had a beer in hand and hung out to see us finish.

Earlier that day, we were walking around the grounds and hall and spoke with some Iranian Weightlifters. One of the coaches, in very broken English, told us that he loves the Americans because we are always so ‘Candy’ to be with. I don’t know the look that was on my face but he could tell he got the word wrong. He said, “Candy…cand…kind. KIND! Americans are always so kind!” I tell you what, there are few things an Iranian can say to an American that are more special than that. Whomever he’s come in contact with, you’ve done a great job at representing our country. I was so incredibly proud. 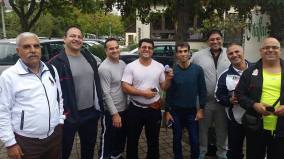 Members of the Iranian Weightlifting team. The Coach on the far left said, “Americans so candy.” It was cute.

At the end of the session, there we were, Ronay; Levenda, and myself (we lost Kris but found her when she performed a spectacular photobomb of the Bigg guy and me;) completely wiped out; maybe not as happy with how the lifting went as we wanted to be, but overall…together. Again, I was so proud. When that National Anthem played for Ronay (parts of it anyway, there wasn’t time for full anthems so they played about a minute of each one. It was pretty funny) I put my hand on my heart and was so thankful.

When it came time to collect my silver medal (a surprise at first, I had the two Hungarian weightlifters mixed up so I thought I had taken 3rd. As happy as I was to podium, second is better. Heh) all I could think was, ‘whoa, I’m on a platform; at a World Championships; in Germany. There is my flag, being raised. How fucking cool is THAT!’

I think that’s what is being missed in all of these trendy and fake protests involving the National Anthem. That these people are doing exactly what they are “protesting.” (Slacktivists, my good friend Good Ryan calls them.) See, we’re in Germany. Four middle aged women against Hungarians; South Africans; Dutchies; Finnlanders; Italians, and probably others that aren’t coming to mind. But we stand together with our hands over our hearts when our Anthem is played. The weightlifting doesn’t bring us together, if that were the case everyone else would have their hands over their hearts for Ronay’s moment. But we stand together as Americans first, anything else afterwards. That’s what the National Anthem does. It doesn’t split us, it pulls us together. And if you’re “protesting” being split into various groups, you’re splitting yourself away from the Unity the National Anthem gives. Fucking duh.

Ronay’s win and Kris’ 3rd place gave us a brief moment to celebrate the good’ol USA.

One of the Iranians, when they were mobbing the Bigg guy for pictures outside the venue showed me a picture of he and another weightlifter. It was an American woman I had seen in the venue that day. I have no idea who she was, she looked younger than me and was wearing a shirt we received when registering for the meet. Anyways, Ali wanted to know if I knew who she was? Nope, no clue. He then pointed at me and said, “American” and then pointed to her image and said, “American, yes?” Well, ya. But I don’t know her. It confused him and I didn’t have the language skills to tell him that American lifters weren’t united like the Iranian team. Poor guy.

I know it’s not very trendy but hot damn, I’m proud to be an American. And in a very small village in Germany, on a big stage but meaning not much to others, I was so proud to be a positive representative on how “Candy” Americans can be.

My dream is of a place and a time where America will once again be seen as the last best hope of earth.

For training opportunities at tosabarbell, call or text Juli at 320-296-9313. jep6095@gmail.com tosabarbell is a private, home grown gym with three lifting platforms; squat rack; prowlers; throwing implements; bars, bumpers and everything else needed for an effective strength and conditioning program. Straightforward barbell programming including the Olympic lifts; sound (read: not fancy bullshit) diet advance for weight gain or loss; and strong coaching will ensure you will meet your goals such as becoming stronger, more explosive, and better conditioned. Juli has been coaching teams and athletes for over 20 years. She grew up participating in various sports at various levels but was always drawn to those that require strength training. She is a 2-time Master's Amercian Weightlifting Champion and holds six Master's American records. She is a Master's Weightlifting National Champion and holds three National records. She is a Master's Weightlifting World Championships Silver Medalist in 2016. Juli is also a Masters Highland Games World Champion and holds three World Records in the Braemar Stone; Heavy Weight for Distance, and Light Weight for Distance in the 45-49 class. Her 5 years of training and coaching under Mark Rippetoe has honed her coaching skills to be a top choice for you to reach your strength and conditioning goals. Juli will strongly encourage tosabarbell athletes to compete (and prepare you to do so.) However; tosabarbell is also for those who just wish to be stronger and go through life feeling better. Matt WanAt is a retired Professional Strongman who competed frequently with Strongman Champions League in Europe. He played a year of D1 football with Iowa before concentrating on his Chemical Engineering degree in Iowa City. He is a native of Wauwatosa and still remains a staunch supporter of Tosa East. This blog will be a mixture of strength notes, coaching and nutrition tips, personal shit; bacon delicacies, and a whole lot of fun.
View all posts by tosabarbell →
This entry was posted in Uncategorized and tagged Abraham Lincoln, America, Bad Rappenau, Proud to be an American, USA Weightlifting. Bookmark the permalink.

2 Responses to Americans So Candy