Posted on January 5, 2017 by tosabarbell 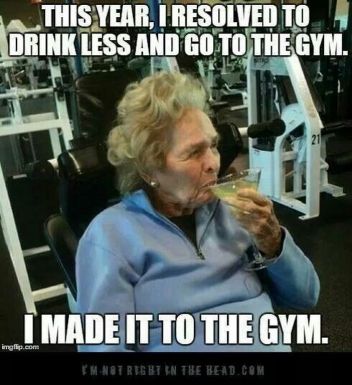 Remember, hitting just a few of your goals is success. Be proud of yourself. Also, where’s the gym that serves up Martini’s? I want that gym.

Have you ever noticed ranting trends on the Facebook? Bitching about 2016? Wouldn’t have existed without the FB! The most recent trend is bitching about people who are bitching about people who make resolutions and then not keep them. I haven’t seen it and admittedly, I’m kind of surprised. I have a lot of fitness professionals along with strength and conditioning folks who are never afraid to be asshole on social media so I figured if this was really as widespread as people made it to be I’d see at least one resolution shaming post.

Nope. Nada. I’m not saying they don’t exist, I’m just admiring the trend to shame people for shaming other people. But that’s not the point of today.

Our household has some New Years Resolutions. Some we’ve already found success in; some we’ve already failed at. It’s January 5th, we’ve got time to do plenty more of both (hopefully) in the upcoming year. Our main goal for the year is to invest in friendships. Connect. Both with friends we share love with, and each other. To be honest, this is tougher the older we get. Schedules are busy enough without the added stress of trying to get together with friends, and yes, at times it’s stressful to find an open date to get together with friends.

Here’s where we’re parting ways on that front. I fully believe there are ebb and flows of friendship. We have some friends for a very long time and some that seem to burn hot for shorter amounts of time. I value both. People who have invested some of their time to enrich ours, that’s special. While we can be disappointed about not finding as much time as we previously made for each other, that’s okay. Lives twist and turn and paths sometimes don’t cross as much as they once did. No worries.

But when trying to get together turns into a fury of texts that last over days or weeks, well, no. Look, everyone is busy with what they choose to be busy with. We’re all adults here. If trying to get together brings out the “Oh my gods we’re so busy and I can’t even believe how busy we are with A, B, and C plus X, Y, and Z” well, forget it. It brings out childhood memories of listening to my parents find so much value in being overextended. I can still hear Pastor John standing up in the middle of the room at Zac and Zandra’s birthday parties announcing that “We have to go, we’re in a scramble for church on Sunday” where I guess everyone is supposed to be amazed at how busy they are. Barf. (By the way, my dad was always “in a scramble.” My thinking was that he should take some form of time management skills course to avoid the scramble but I really believe he loved being in a scramble.) Some people equate self worth with how busy they are, even if they really aren’t. Not me.

If schedules are such that getting together isn’t feasible for a while, okay. No worries. I don’t love you less, I just am not going to jump through hoops to find a time to connect. That’s not fun for me. And Girls Just Wanna Have Fun.

I’ve looked at whether or not Matt and I are doing everything we can for a more fulfilled life, i.e. be more busy. Nope. We seem to get a lot done and still have time for Top Chef on Thursdays. We’re tightening the purse strings a bit due to some upcoming travel and have looked for ways to still make an hour or two special each week without spending over $20. I guess if we have time to find some cheap fun, we have time to meet a friend for a coffee or a wine. Even if it’s impromptu. And we look for others who are comfortable enough to do the same.

There’s our resolution. So bring on the shaming of people trying to make resolutions and then I’ll shame you back for trying to shame me and then you can shame me for my hypocrisy of shaming others. That’ll get us to tomorrow where we can find something else to bitch about.

Time management is an oxymoron. Time is beyond our control, and the clock keeps ticking regardless of how we lead our lives. Priority management is the answer to maximizing the time we have.

For training opportunities at tosabarbell, call or text Juli at 320-296-9313. jep6095@gmail.com tosabarbell is a private, home grown gym with three lifting platforms; squat rack; prowlers; throwing implements; bars, bumpers and everything else needed for an effective strength and conditioning program. Straightforward barbell programming including the Olympic lifts; sound (read: not fancy bullshit) diet advance for weight gain or loss; and strong coaching will ensure you will meet your goals such as becoming stronger, more explosive, and better conditioned. Juli has been coaching teams and athletes for over 20 years. She grew up participating in various sports at various levels but was always drawn to those that require strength training. She is a 2-time Master's Amercian Weightlifting Champion and holds six Master's American records. She is a Master's Weightlifting National Champion and holds three National records. She is a Master's Weightlifting World Championships Silver Medalist in 2016. Juli is also a Masters Highland Games World Champion and holds three World Records in the Braemar Stone; Heavy Weight for Distance, and Light Weight for Distance in the 45-49 class. Her 5 years of training and coaching under Mark Rippetoe has honed her coaching skills to be a top choice for you to reach your strength and conditioning goals. Juli will strongly encourage tosabarbell athletes to compete (and prepare you to do so.) However; tosabarbell is also for those who just wish to be stronger and go through life feeling better. Matt WanAt is a retired Professional Strongman who competed frequently with Strongman Champions League in Europe. He played a year of D1 football with Iowa before concentrating on his Chemical Engineering degree in Iowa City. He is a native of Wauwatosa and still remains a staunch supporter of Tosa East. This blog will be a mixture of strength notes, coaching and nutrition tips, personal shit; bacon delicacies, and a whole lot of fun.
View all posts by tosabarbell →
This entry was posted in Uncategorized and tagged Busy busy busy, Connecting, Friendships, In a scramble, John C Maxell, Time Management. Bookmark the permalink.