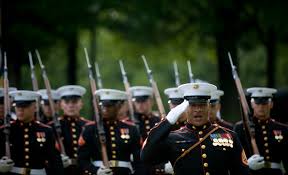 On Tuesday, we were able to participate in a primary election for the Wisconsin Supreme Court. I went in the afternoon during a pouring rainstorm to our new voting venue at the Library to a room full of Senior Citizen volunteers. I’m guessing it was a slow day due to the lackluster voting issue (which actually is quite huge but folks tend to get more upset as to what’s happening in Washington rather than local/state issues) and the pouring rain. Nontheless, I risked melting and ran over during an afternoon break.

One table of volunteers were giving me instruction on putting the ballot into the little grabber machine and then the woman said, “Once it accepts the ballot, it will salute you.” Cool, I’ll wait on that shit. That sounds fun. About 15 seconds later, words came up on the screen that said that ballot has been accepted. So I waited. Eventually, the woman said, “Well, it doesn’t actually salute you, it just tells you the ballot is accepted.”

You can empathize with my disappointment. I mean, I’ve never received a salute before and I was pretty stoked. Some machine I’ve never even met was going to salute me just cuz I voted. Fucking sweet! And then BAM! A cold dose of reality was thrown in my face. No salute. I turned around and said I was waiting for a salute which seemed to annoy HER! Like, okay, I’m totally the crazy one here waiting for a salute when you said I had one coming.

Look people, the word salute means a very specific thing. It means, well, salute. Either A) a gesture of respect, homage, or polite recognition or acknowledgment, especially one made to or by a person when arriving or departing or 2. make a formal salute to. Neither of these things happened. What a rip.

Benny Hill, the original sexual harasser. Don’t even care, his shit was funny.

I wrote the other day about using our words vs. sharing useless, cruel meme’s that mean nothing except to make yourself feel superior and make others feel like a dumbass. Learn to express yourself with words. I equate a political meme to a grunt from a punky 13 year old who can’t be bothered with actually giving an answer when told to do his chores (Oz tried this once. Once.)

However; when using your words, you need to ensure that they are being used correctly. Lawds (as my girl Liv would say), the amount of stupidity as Crossfit was up and coming because they were relabeling exercises that had existed for hundreds of years. No fucknutt, there isn’t a Crossfit Kettlebell swing. You just took the name that already existed, Kettlebell swing, and added a fucked up way to do it. The other day, Matt was looking for a gym to train at in unknown territory (for those that don’t know, my hot hunky hubs is often a road warrior but since his travels take him largely to the same region he has history on where to find a good gym.) We found a small, black iron’ish gym and he figured he could go there. Upon further reading; however; he would have to demonstrate proficiency in their squat method. Well fuck, it doesn’t matter that any day of the week the man can jump off a plane and squat over 600 pounds, he may be doing it “wrong and not uniform to their methods” so can’t train at this gym. Who’s fucked up in that scenario?

If I walked into a gym and said I needed to squat and the front desk guy started drilling me on which method I used, I’d be hard pressed to stay. See, I used my words. Squat. This would insinuate a back squat where one could assume a rack may be necessary and if I need spotters, I’ll let you know. Because the word squat means just that. (Now, if I need to AIR squat, I’ll just stay at the hotel. If I needed to FRONT squat, I’d probably need much of the above minus spotters. If I needed to GOBLET squat, I’d fill that shit with wine and be feeling super good by the end of the session.) But we don’t have to pretend we’re not communicating. Because I used my words. Squat.

According to the internet, this is a Grandfather/Granddaughter salute. Pretty awesome, eh?

I have been very confused the last year and a half with so many people of all walks of life getting press time from the MSM because they have claimed that President Trump is mentally ill. Actors; other politicians, even friends have spread this across social media and it confuses me. See, mentally ill has meaning. Many actually. Dementia (if you love someone who had or has Alzheimer’s you wouldn’t joke about Alzheimer’s); Bipolar Disorder; Clinical Depression, among others. Mentally Ill has meaning and is actually a complicated issue to diagnose. To my knowledge, Rob Reiner doesn’t have a license to practice medicine. So why does he keep saying words that have an established meaning and no one in the Mental Health industry is screaming from the rooftops to Shut The Fuck Up? Does it even occur to people that when they label another human being Mentally Ill because they don’t agree with their views or just don’t like them, that that’s actually a pretty big deal? Because there really ARE people who are mentally ill who we can’t make fun of. Cuz that’s not nice, or even accurate. Jeezus, if I can’t call someone who does something stupid but funny a retard, you can’t call someone you disagree with Mentally Ill. IT’S THE EXACT SAME FUCKING THING!

Here’s one that is so despicable (without the awesome Minions); Hitler. People like to say President Trump  is “worse than Hitler.”  Look, Adolf Hitler was a pretty bad guy. I believe we can all agree to that. His policies and reign included millions of murders. When you use the word, “Hitler”, there can be only one. To accuse someone who has not even remotely behaved in such a way (his daughter is Jewish, idiots) is so incredibly dismissive and disrespectful to the victims AND survivors of Hitler I can’t for the life of me understand how easily it rolls of people’s tongues. Just because you disagree with someone doesn’t mean you can immediately begin calling them names that have a very specific meaning. See, we teach this in pre-school and have million dollar anti-bullying campaigns that say so. What kind of message are you sending your snowflakes when you tell them they don’t have to take bullying but then behave as a bully?

I am a woman. This has a very specific meaning. I am married. This has a very specific meaning. I am short. This is rather subjective (I just really love meeting people shorter than me. Sorry not sorry.) I am a mother. Again, specific. I have a dog. Specific. See, there are people who want to live in a world where I can say, “I identify today as a woman of Pacific Island descent but may identify in another way tomorrow who is married but is open to having other relationships because we have an open marriage (we don’t, settle down) and sometimes identify as 6’4 with other day’s 5’5 and some days I’m a mother but other days I identify as a gender neutral role model with a lion who, on other days, is a dog.

Don’t be a childish cunt.

As we express our gratitude, we must never forget that the highest appreciation is not to utter words, but to live by them.

A son salute’s his father.

For training opportunities at tosabarbell, call or text Juli at 320-296-9313. e-mail to jep6095@gmail.com At tosabarbell, I build relationships cultivated in a strength and learning environment. There is no 12 week magic pill program to strength but rather a lifetime commitment to be the very best and most useful human you can be. tosabarbell is a private, home grown gym with three lifting platforms; squat rack; prowlers; throwing implements; bars, bumpers and everything else needed for an effective strength and conditioning program. Straightforward barbell programming including the Olympic lifts; sound (read: not fancy bullshit) diet advance for weight gain or loss; and strong coaching will ensure you will meet your goals such as becoming stronger, more explosive, and better conditioned. I have been coaching teams and athletes for over 30 years. I grew up participating in various sports at various levels but was always drawn to those that require strength training. I have multiple local, national, and world records in the sports of Weightlifting and Highland Games Heavy Events as well as a combined total of 5 World Championships. My 5 years of training and coaching under Mark Rippetoe provided a wide range of influence from some of the top strength & conditioning and throwing coaches in the country. I will strongly encourage tosabarbell athletes to compete (and prepare you to do so.) However, tosabarbell is also for those who wish to be stronger and go through life feeling better. Matt WanAt is a retired Professional Strongman who competed frequently with Strongman Champions League in Europe. He played a year of D1 football with Iowa before concentrating on his Chemical Engineering degree in Iowa City. He is a native of Wauwatosa and still remains a staunch supporter of Tosa East. This blog will be a mixture of strength notes, coaching and nutrition tips, personal shit; bacon delicacies, and a whole lot of fun.
View all posts by tosabarbell →
This entry was posted in Uncategorized and tagged Bully, bullying, Liar, Lying, Marines, Salute, Snowflakes, tosabarbell, Use Your Words, Veteran. Bookmark the permalink.